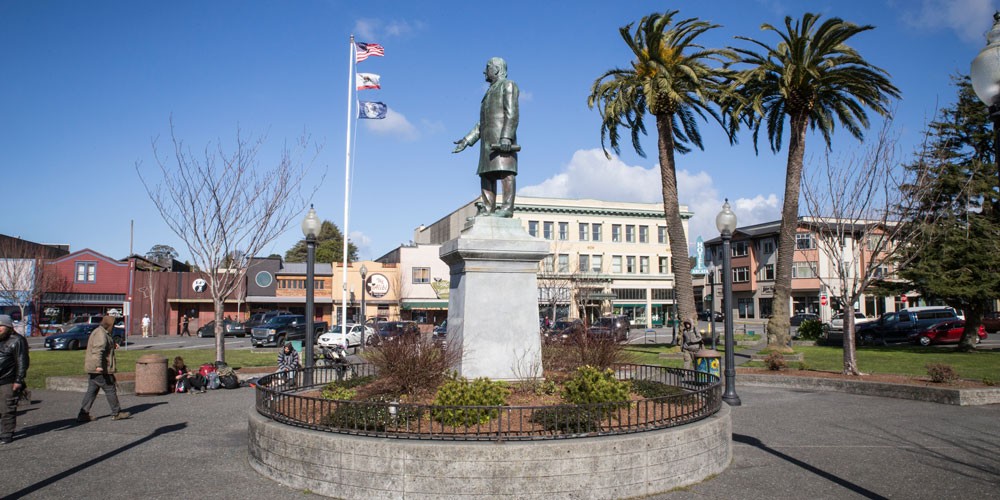 “What the fuck? It’s been four fucking hours,” a frustrated audience member exclaimed incredulously at the end of Wednesday’s Arcata City Council meeting. “Why did you do this?”

The remarks were directed squarely at Councilmember Susan Ornelas, who had just dropped her second President William McKinley’s statue bombshell in as many weeks.

“At this point, I’m saying let's just continue with what we’re doing and I’m sorry I cost us all of this time,” Ornelas told the crowd after rescinding her proposal for a citywide vote on where the bronze work should be placed, with one option being the center of the Arcata Plaza — the same place the council voted Feb. 21 to remove the statue from.
“It wasn’t a political maneuver. … I wasn’t thinking it through that way,” Ornelas said. “As I said, when I brought this forward, I was not trying to rescind my vote.”

But many of the 100 or so speakers had seen it that way, turning out in large numbers to oppose the agenda item she initiated in the still raw aftermath of the council’s controversial 4-1 vote a month earlier to remove the statue from where’s it has stood for more than a century.

One after another, speakers implored councilmembers to stand by their decision, not to backtrack or give in to the “racist backlash,” with several thanking them for being “courageous” and urging the council to “stand strong.”

“I commend you for the vote that you took,” one woman told the council. “I hope you follow through on it.”

“I think you should smelt that motherfucker down. I think we should try to erase him just the way he tried to erase indigenous peoples in many nations.” click to tweet
Others were far more pointed in their remarks, saying anything less than taking down McKinley was akin to condoning white supremacy. More than one dropped an F-bomb.

“I think you should smelt that motherfucker down,” one woman said, adding that maybe the remnants could be used to create a new sculpture. “I think we should try to erase him just the way he tried to erase indigenous peoples in many nations.”

Some, however, had clearly seen an opening to revisit the issue. While vastly outnumbered by those who supported McKinley’s removal, about a dozen speakers either raised questions about whether this was the best use of taxpayers’ money — with some asking if maybe there was a middle ground that didn’t include the statue’s removal — or called for a public vote.

When another speaker asked for a solid figure on how much the removal would cost — staff has estimated the number, including the environmental review, at around $60,000 — someone called out from the back of the room, “We’ll do it for free.”

Mayor Sofia Pereira appealed for decorum several times during the night as applause erupted or when audience members shouted back at speakers or councilmembers.

Overall, the meeting went relatively smoothly despite the evident strong emotions that ran on all sides of the debate — and a somewhat less than auspicious start.
That included Ornelas’ gaucherie when she responded to Councilmember Paul Pitino, who began the council’s opening dialogue by asking why the plaza center would even be included as an option in a ballot measure on McKinley’s future location, saying “it seems to be in conflict with our vote.”

“So how do deal with that?” he asked. “We’ve already voted that it’s going.”

Ornelas said the reason she put it there as a mechanism to engage residents in the environmental review process, which includes a “no project” option as a matter of course.

She emphasized that she was not backing down from her vote to take McKinley down, saying it was evident to her that the statue was offensive and “he shouldn’t be in our living room,” while adding she thought maybe the city could have a theme for the year to help educate local residents about the 25th president, his policies and local history, including the atrocities committed against Native peoples.

“That’s been the joke: My favorite lecture — genocide,” she said, eliciting gasps and outraged murmurs from the crowd, before saying she was sorry. The last speaker of the night called out her comment “disgraceful,” “stupid” and “ignorant” words that “should not be present at a city forum.”

When the conversation turned back to the council, Ornelas quickly stated that the man who had just spoken was absolutely correct.

“So, I really want to offer a deep apology,” she said.

Then, after nearly four hours of public comment, Ornelas made her pronouncement that she now realized her suggestion of a public vote — emphasizing “that’s all it was” — had sown misunderstanding.

Saying she was just trying to respond to residents who felt their voices hadn’t been heard, Ornelas acknowledged the way she originally presented the idea might have been confusing but also said it became “twisted in the media.”

Video of the council's March 7 meeting. Ornelas' comments begin at roughly the 3:04:00 mark.


And, with that, the item was dropped.

“So, we can just forget this and continue on with the statue coming down,” replied Pitino, who made the Feb. 21 motion to remove the sculpture and was categorically opposed putting the issue to a vote.

But there is still a lengthy environmental process ahead because the tribute, dedicated to the city in 1906 by local farmer and McKinley enthusiast George Zehndner, is listed as a historic feature of the plaza in the Arcata General Plan.

“I’m looking forward to us moving forward with this,” Pereira told the crowd.