Residents Start Process to Put McKinley Statue on the Ballot 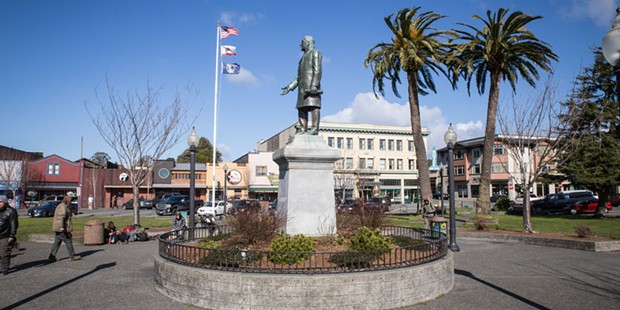 OK, OK, OK, maybe the controversy over President William McKinley’s statue on the Arcata Plaza will go to a vote after all.

Two Arcata residents, David LaRue and Stanton Reynolds, filed paperwork with the city earlier this week to begin collecting signatures for a ballot initiative to prohibit “the modification and/or destruction” of the statue or its base “and/or the relocation from its historic place.”

The filing comes on the heels of last month’s 4-1 vote by the Arcata City Council — with Councilmember Michael Winkler dissenting, saying the matter should go before voters — to take down the bronze work dedicated in 1906.

Several advocates for the removal of what many describe as an oppressive symbol have noted that the statue stands on what is historically Wiyot land that was taken through violent means long ago, meaning few Native peoples reside within city limits.

The council’s decision was cemented March 21 following nearly four hours of public comment and discussion after Councilmember Susan Ornelas rescinded her proposal for a citywide vote on where the statue should stand — with one option being its current spot.

Under the proposed initiative — if supported by a majority of voters — that decision would be voided. But first, there’s the matter of making it to the ballot.

After a few incidentals, including publishing a “notice of intent” to circulate a petition in a newspaper and providing proof to the city, LaRue (who started the Facebook page “Let the people vote on our McKinley statue" and the GoFundMe website “Save Arcata’s McKinley Statue”) and Reynolds will need to gather at least 961 signatures by May 29.

Those will then need to be certified by the Humboldt County Elections Office and, if that were to happen, the city council would then adopt a resolution at its July 18 meeting to place the initiative on the November ballot, according to an email from City Manager Karen Diemer.

(Arcata City Clerk Bridgit Dory said in an email to the Journal that the June ballot deadline was last month.)

Meanwhile, the city announced earlier this week that it expects to provide an update on the next steps for the McKinley statue tomorrow. Because the statue is listed as a historic feature of the plaza in the Arcata General Plan, there will need to be a lengthy environmental review.

Diemer said in her email that the city will “concurrently proceed” with that process if the proposed initiative qualifies for the ballot.  See related PDF McKinley_Statue_Initiative_Petition.pdf