Every seat in the main auditorium of the Arcata Community Center was full. Half an hour before the memorial for Herrmann Spetzler, late CEO of Open Door Community Health, vehicles futilely circled the packed parking lot. More than 500 people attended the celebration of life for Spetzler, who died unexpectedly March 11 at the age of 70. As his friend Allan Katz (who emceed the event) said, it was what he would have wanted.

"He didn't like long farewells," said Katz, recalling how Spetzler would often leave parties and events without saying goodbye. Other speakers recalled the health care champion's love of photography, nature and his signature Birkenstock sandals paired with socks, which he wore with everything from suits to shorts. But the theme that shone through every speech was Spetzler's advocacy and his tireless dedication to expanding the reach and mission of community healthcare in rural Northern California.

Brent Jenkins, a registered nurse with Open Door, said before the ceremony that the CEO had a way of staying on the "front line" of his multi-city organization.

"I was touched by the fact that when I first started working there, he came over and introduced himself," Jenkins said. "He said, 'You're Brent. I've heard so much about you.' I had just gotten there." 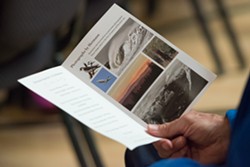 Jenkins went on to be the triage nurse for homeless people at Eureka's daily Free Meal, a program that was also initiated under Spetzler.

"I thought that was a pretty good way to capture what Open Door was about," said Jenkins, referring to Spetzler's holistic approach to healthcare.

Spetzler took the helm of Open Door in 1977, when it was a volunteer-run clinic in Arcata. Under his tenure, the organization grew to 10 clinics in Humboldt and Del Norte counties, serving an estimated one third of the region's population and providing dental, medical and mental health care. The 2010 passage of the Affordable Care Act saw a budget windfall for the organization that allowed it to expand into more rural communities. In subsequent years, Open Door also absorbed both the practitioners and client loads of smaller family practices that were closing their doors.

While overseeing Open Door through a period of enormous change and growth, Spetzler consistently advocated for the rights of MediCal and MediCare patients in rural areas.

Spetzler also served on numerous boards and committees, founding the California State Rural Health Association and co-founding the California Primary Care Association. Spetzler also helped create the Telehealth and Visiting Specialist Center, which utilized technology to bring specialized care to people in more remote areas. Spetzler, who graduated from Humboldt State University with a masters in administration in 1987, was also conferred an honorary degree by the university as a doctor of humane letters in 2014. This ended a decades-long inside joke between Katz and Spetzler, whereupon his friend would refer to him as "Dr. Spetzler."

Spetzler's daughter and older brother talked about his sense of humor and love of family. Maria Spetzler showcased many of her father's pictures, which included a selfie of Spetzler in a horned Viking hat. The crowd laughed. Carl Spetzler recalled the family's trip across the Atlantic in 1955, when they emigrated to the United States to be reunited with their engineer father. His younger brother, he said, got in trouble for sneaking into first class.

Bobbie Wunsch, founder of Pacific Health Consulting Group, said that Spetzler always greeted her with a bear hug and a compliment. At various meetings across the state, he would introduce himself as "Herrmann Spetzler, rural," bringing the needs of rural Californians to the forefront of the conversation.

"He never let an opportunity go by to talk about how different life is in rural California," said Wunsch.

Along with his colleagues and friends, several current and former elected officials attended and shared their memories. Former Assemblymember Wesley Chesbro recalled that both his and Herrmann Spetzler's sons were delivered through Open Door's system.

He referred to how Spetzler had taken a "tiny, volunteer-run clinic" in Arcata to a an "amazing, state of the art facility." Spetzler, Huffman said, became one of his "go-to" advisors on the subject of healthcare, recalling his dry wit and optimism.

"Even faster than our economy and system could create lemons, he and his staff would create lemonade," said Huffman. The congressman said he is prepared to introduce a statement memorializing Spetzler into the Congressional record April 10. He added that he also planned to pull his old pair of Birkenstocks out of the closet and wear them "in memory of Herrmann."

Spetzler's widow, Cheyenne Spetzler, has taken the helm of the organization in his passing. Kathleen Moxon, president of Open Door's board, says she is confident that "the organization will move ahead without disruption."