A group of about a dozen Humboldt State University students blocked the entrance to the administration building this morning and released a list of demands during a demonstration to call attention to the unsolved killing of David Josiah Lawson.

The demonstration came as a part of 12 days of action leading up to the anniversary of Lawson’s April 15, 2017, stabbing death — with each day representing a month that the slaying has gone unsolved.

Lawson, 19, was fatally stabbed during an altercation at an off-campus party off Spear Avenue. A memorial of flowers at the round-about near the scene at Spear Avenue and West End Road in Arcata remains nearly one year after his death, which sparked ongoing dialogues about race relations in Arcata as Lawson was black and his accused assailant is a white man.

Barbara Singleton, one of the students involved in today’s demonstration, said the group is demanding that HSU and the California State University system donate $25,000 to a legal fund for Lawson’s family to pay attorneys and private investigators; the California Attorney General’s Office join the investigation into Lawson’s killing; and HSU help Lawson’s girlfriend, who was injured in a fight the night Lawson was killed, with legal fees.

The students also want HSU to put up a wall or mural commemorating Lawson and Corey Clark, who was a senior majoring in sociology when he was found dead of multiple gunshot wounds in a Eureka apartment. His 2001 death also remains unsolved.

Lawson’s killing is currently the only unresolved homicide in Arcata going back decades.

The morning of Lawson’s death, Arcata police arrived at the scene to find Lawson bleeding to death from stab wounds to his abdomen and a bloodied and beaten Kyle Christopher Zoellner, 23, of McKinleyville, who partygoers identified as Lawson’s assailant. Officers also found a 10-inch kitchen knife at the scene and Zoellner, who was working as a chef at the time, was arrested at the scene and charged with Lawson’s murder.

But after a two-week preliminary hearing in the case that featured contradictory testimony, little physical evidence linking Zoellner to the killing and no eyewitnesses, Humboldt County Superior Court Judge Dale Reinholtsen ruled there was insufficient evidence to hold Zoellner to stand trial and ordered him released from custody. The ruling led to a series of protests and escalating frustrations among HSU students — particularly students of color — who felt the case was mishandled, which some attributed to racial bias.

Since Zoellner’s release, Arcata police have continued their investigation into Lawson’s killing and Zoellner remains the only named suspect. (Because the previous case against him was dismissed before trial, nothing would prevent prosecutors from charging him again with Lawson’s murder if police find evidence to support the charge.) In February, APD issued its latest public update on the case, saying that the department continues to work “through a defined investigative strategy based on all the physical evidence and witness statements, much of which has been developed/obtained after the preliminary hearing.”

Additionally, the department said it had received some forensic evidence from the California Department of Justice’s crime lab and was awaiting additional DNA test results. The update also noted the involvement in the investigation of Tom Parker, a 73-year-old retired FBI agent with more than four decades of police work under his belt. Parker, the update noted, had reviewed all the case materials and suggested “several next steps” that were underway.

A community reward fund remains set up with more than $40,000 for anyone who provides information leading “directly” to the arrest and conviction of Lawson’s killer.

Singleton said today’s demonstration is just one of many students will be carrying out in the coming weeks. There will be a walk-out and rally on campus tomorrow, a vigil and “die-in” on April 6 during the campus’ Spring Preview event, a protest on April 14, a vigil and memorial for Lawson on April 15 and another “die-in” at Arcata City Hall prior to the city council meeting on April 18. Folks wanting more information and a detailed schedule of events can visit a Facebook page set up to raise awareness of Lawson’s killing and bring national media attention to it here. 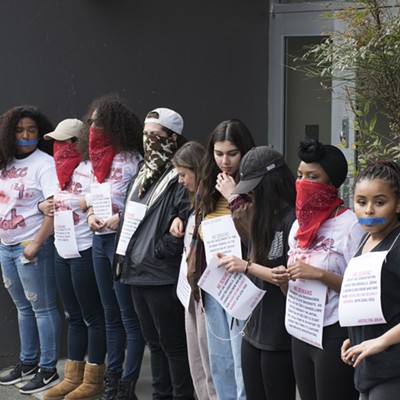