A Year Without Abalone 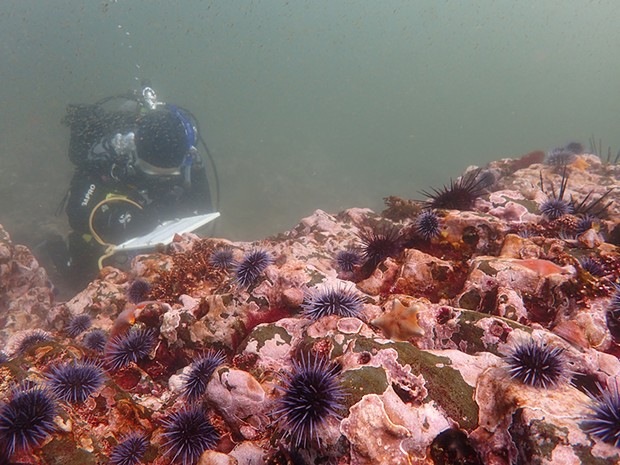 The North Coast’s red abalone are dying, starving really, the latest casualties in a literal sea change taking place off our shores due to what scientists are calling a “perfect storm” of ecological events.

As detailed in the Journal’s March 8 cover story, “The Plight of the Abalone,” large swaths of the region’s once lush bull kelp forests — the primary food source of the prized mollusks — have been lost in the last few years.


Instead, rocky reefs that once swarmed with a variety of sea life have become virtual underwater deserts overrun by legions of spiky purple creatures in a phenomenon known as “urchin barren.”

That led to the California Department of Fish and Wildlife's unprecedented decision in December to close the 2018 red abalone recreational season, which traditionally started on April 1 although it was pushed back a month and shortened last year due to the same concerns.

The commission will begin discussions on when to reopen the fishery at its meeting in Ventura later this month.

Read the release from the California Department of Fish and Wildlife below:


The California Department of Fish and Wildlife (CDFW) reminds anglers that the north coast red abalone fishery will be closed in 2018. In December 2017, the Fish and Game Commission voted to close the 2018 season. The closure is the result of extreme environmental conditions, including a widespread collapse of northern California kelp forests.
CDFW surveys in 2017 found low abalone abundance, starving abalone and many fresh empty shells, which indicate recent high abalone mortality.
The reopening of the fishery will be determined by the new Red Abalone Fishery Management Plan (RAFMP) currently being developed under the direction of the Fish and Game Commission. The California Fish and Game Commission will be discussing the RAFMP at their April 18-19, 2018 meeting in Ventura.