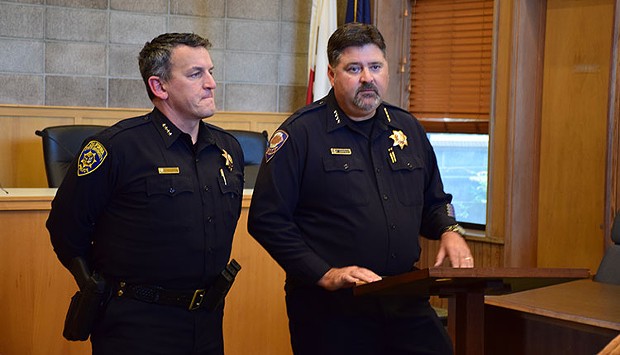 In response to a spate of media inquiries, Arcata City Manager Karen Diemer released a bit more information this afternoon about Police Chief Tom Chapman’s abrupt resignation, including that the department’s lieutenants will trade off as acting chief until an interim is appointed.

Diemer also said Chapman’s decision to resign “does not stem from any one single thing. It is a combination of personal reasons and professional judgment on what he believes is best for the department and himself.”

Diemer added that Chapman was “unaware of Tom Parker’s final decision” to step away from the David Josiah Lawson homicide investigation at the time of his resignation. Diemer said the Lawson investigation will continue, with a solidified team of investigators from both APD and the Humboldt County District Attorney’s Office.

See Chapman’s brief resignation letter copied at the bottom of our original post.


1st UPDATE:
The Journal has learned that Arcata Police Chief Tom Chapman’s resignation this morning followed that of a consultant brought in to advise the department on the ongoing investigation into the April 15, 2017, killing of Humboldt State University sophomore David Josiah Lawson.


Reached this morning Tom Parker, the former FBI agent who had been volunteering his services pro-bono as a consultant on the Lawson case, confirmed that he’d “regrettably terminated” his contract with the city yesterday and was stepping away from assisting with the investigation. Parker declined to discuss any details of his decision or Chapman’s resignation, other than to say he’d become “frustrated with a lack of cooperation” in the case. Asked if he’d consider coming back into the case now that Chapman has resigned his post, Parker said “that would have to be a topic of further discussions and negotiations with the city.”

The resignations come as the anniversary of Lawson’s still unsolved killing fast approaches and amid an escalating outcry from HSU students and community members who have been critical of the city’s handling of the investigation. A student-led 12 days of action — with each day representing a month that Lawson’s killing has gone unsolved — remains ongoing, with a celebration of life planned for Lawson on Sunday at the D Street Community Center in Arcata.

Attempts to contact numerous city officials, including City Manager Karen Diemer, were not immediately successful and an outgoing message on Chapman’s voicemail says he is “out of the office and will not be checking messages.”

"This is an incredibly difficult decision for myself and my family but I believe the timing is right not only for me but for the department," he wrote. "You all do amazing work for the betterment of this community. It is a difficult time for police officers and departments around the nation and it can feel like you are not supported. Please know many people truly appreciate the police and the difficult work you do. They rely on you. They trust and they support you. It has been an honor and a privilege to work with every one of you.  Will cherish the friendships and memories I have made working here for the past 24 years. Thank you."

While neither the city nor Chapman offered a reason for the resignation, it comes as the year anniversary approaches of the killing of 19-year-old Humboldt State University sophomore David Josiah Lawson, who was stabbed at an off-campus party April 15, 2017. The killing remains Arcata’s only unsolved homicide case, and Champan and the department have drawn criticism from Lawson’s family and the local community for their handling of the case.

Chapman, who had been with the Arcata Police Department for decades, was named chief in 2010, after former longtime Police Chief Randy Mendosa was tapped to become the city manager.

Press release from the city of Arcata:


THE CITY OF ARCATA ANNOUNCES THE RESIGNATION OF
ARCATA POLICE CHIEF TOM CHAPMAN
Arcata, CA, Tuesday, April 10, 2018 – The City of Arcata announces the resignation of Police Chief
Tom Chapman after 24 years of dedicated service to the Arcata Police Department.
Chief Chapman’s career with the APD began in 1994 when he was hired as a Police Officer. In 1999, he was promoted to the rank of Sargent and in 2003, earned the rank of second-in-command as Lieutenant/Captain. Chapman has served as Arcata’s Chief of Police since January 24, 2010.
Chief Chapman managed the Arcata Police Department through a difficult transition in municipal policing and many years of budget reductions. His creativity and commitment to the City resulted in minimal reductions to critical programs during these years. Despite budget constraints, his initiative
developed specialty officer positions for the Plaza and Arcata’s high use parks, marsh and forest areas, in addition to a School Resource Officer position serving Northern Humboldt County schools. He built and restored programs such as the Juvenile Diversion Program, utilizing county-wide Measure Z funding, championed the renovation of the Arcata Police Dispatch Center and secured much-needed grants for the purchase of a Mobile Command Vehicle.

His dedication to his work and the community greatly improved APD’s use of technology including the addition of officer body-worn and in-vehicle cameras. His efforts also helped to advance the department’s records management system, update mobile data computers, replace outdated radio consoles and implement the use of automatic license plate recognition.

In addition, Chapman initiated several 21st century policing pillars to APD including mandatory training on race awareness, implicit bias and fair and impartial policing. He encouraged engaging the community with the department’s use of social media and through the creation of a Public Safety Task Force.

Chief Chapman also improved outreach with Arcata’s local business community. He was honored by the Arcata Chamber of Commerce with the Community Outreach Award in 2011 and 2015. Chapman holds the Executive, Management, Supervisory, and Advanced certifications from the Commission on Peace Officer Standards and Training, and he has served on the Board of Directors of the California Police  Chiefs’ Association, as former President of the Law Enforcement Chiefs’ Association in Humboldt County and as former chair of the Humboldt County Drug Task Force Executive Board.

“It has been an honor to serve with Chief Chapman. I appreciate his leadership in supporting the Public Safety Task Force, his openness to finding new ways to serve the public and his dedication to all residents and visitors of Arcata. I will miss his soft-spoken nature and willingness to engage in difficult community issues with compassion and true concern,” said Mayor Sofia Pereira of Officer Chapman’s
resignation.