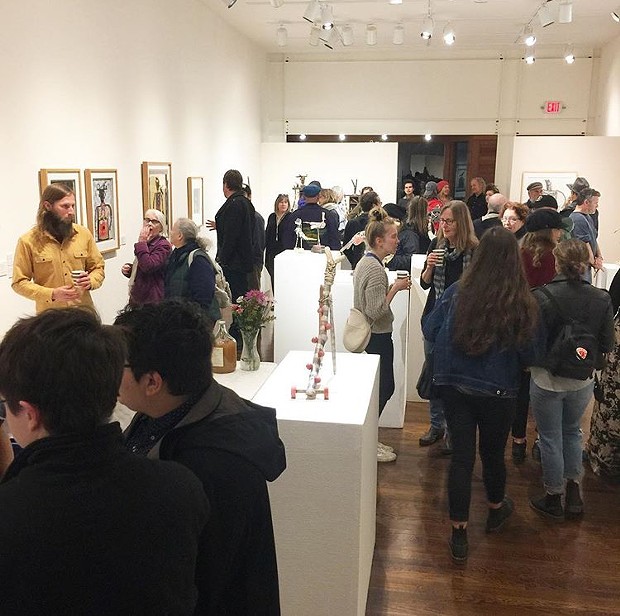 In a press release sent out yesterday evening, Humboldt State University announced the planned closure of its Third Street Gallery in Old Town. The budget-cutting measure had been hanging over the gallery for months since it appeared in a proposal with other potential cutbacks in January. The release, which touts the gallery's accomplishments in boosting community engagement, calls the move "difficult but necessary given current budget constraints," referring to the university's "$9 million budget shortfall over the next two years."


Exhibitions scheduled through the summer are to go on as planned, according to the release, and the university may use the space in other ways until the lease is up in 2021. The Museum and Gallery Practice certificate program will continue, just not at the gallery that's been a mainstay of the Humboldt art scene and Arts Alive! nights since it opened in 1998.

Whether the annual $200,000 cost of maintaining the gallery is the best place to trim is a matter of some debate. Jack Bentley, the gallery's director, has been running an email campaign to save the gallery, urging community members to share their thoughts about the gallery's community and educational value with HSU administrators. The city of Eureka also drafted a statement of support for the gallery. However, that apparently wasn't enough to keep Third Street off the chopping block.

Humboldt State University will close its Third Street Gallery in Eureka, a decision that campus leaders describe as difficult but necessary given current budget constraints.

The closing will not happen immediately. Programs are already set for this summer, and after that the space may be used to serve students in other ways for the duration of the lease.

Planning will now focus on new ways that that University’s art programs can continue outreach to the community, building on successful models of engagement in the departments of Music and Theatre, Film & Dance. As capacity is expanded on campus, efforts may include use of the leased space in Eureka, and faculty and students have already begun developing creative ideas for interdisciplinary programming there.

Closure of the gallery was a budget decision. Maintaining the Third Street Gallery in its current form costs the University more than $200,000 annually, including staff and facilities costs. While there has been donor support over time, the gallery was not able to develop a sustained, diversified funding base.

The Third Street Gallery program closure is part of the University’s effort to address a $9 million budget shortfall over the next two years. A high priority in making the reductions was protecting courses and support that students need to make progress toward their degrees. A final budget for 2018-19 was outlined today in the budget memo.

The Third Street Gallery opened in Eureka in 1998 to provide hands-on experiences for students while also bringing exhibitions to the public. Its exhibits have focused on contemporary arts, and featured artists from the local area as well as national and international artists. The exhibits were able to attract many visitors each year, and they were especially popular during monthly “Arts Alive!” events. According to Lisa Bond-Maupin, Dean of the College of Arts, Humanities & Social Sciences, “There is great pride at HSU in the contributions the gallery has made to growing and enriching the art scene in Downtown Eureka. We are confident that this vibrancy will continue.”

“The Third Street Gallery program has been an excellent example of our commitment to experiential learning and hands-on skill development for students in the arts,” says Dean Bond-Maupin. “We are excited to expand these opportunities by expanding internship sites and involving students from History, Native American Studies, Anthropology, and other majors to participate in our Museum and Gallery Practice certificate program.”

In addition to helping with the University budget shortfall, some savings from the gallery’s closure will be used to offer similar hands-on learning experiences at galleries on campus and in partnerships in the community. Toward this end, the University is investing in a new tenure-line faculty member with this expertise, who is expected to start in the Fall 2018 semester.