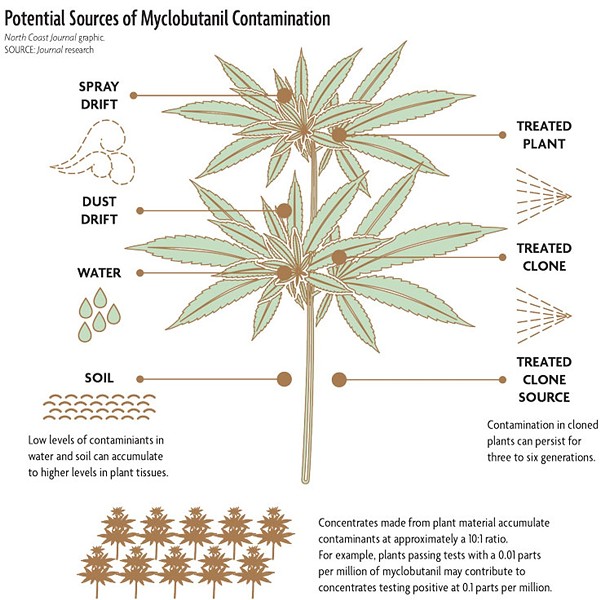 The California News Publishers Association handed out its awards yesterday, of which the Journal, finalist for 12 categories, scored nine awards. We are crazy proud of our winning writers and designers, and of every person who makes each issue possible. Hearty thanks go the community of readers who support us.

First Place Coverage of Local Government for Kim Wear's reporting on the Magneys, cited by a judge for its "strong storytelling techniques used in an article that weaves how a county tried to take away the medical decisions for a dying man with the love story of the couple."

First Place Feature Story for Thad Greenson's "Rio Dell's Hash Lab Murder Case," which the judge noted "has it all ... a neighborhood surprised by drug production ... dire consequences for this community," and the processes and dangers of hash labs "made simple."

First Place Informational Graphic for Holly Harvey's "Potential Sources for Myclobutanil Contamination," which illustrates the possible means of contamination of cannabis crops and is very pretty for something so destructive.

First Place Sports Feature Story for Linda Stansberry's Hoopa Rodeo cover story "Holding On," about which a judge wrote, "The sophisticated, colorful writing perfectly captured a day in the life of a struggling rodeo."

Second Place Columns award for the satirical Seriously? column by Jennifer Fumiko Cahill, a pair of which a judge called "both funny — both scathing."

Third Place Writing for Jennifer Fumiko Cahill's "How to Dine Alone," about enjoying a table for one like a boss.

Third Place Informational Graphic for Holly Harvey's breakdown of "DIY Butane Hash Oil Extraction," a highly dangerous process we'd like to stress, once again, you should not try at home. Read the story — that game could kill you.

The Journal was also a finalist for Arts and Entertainment Coverage, Front Page Layout and Design and Investigative Reporting for Linda Stansberry's "Prelude to a Sweep" and "Swept," about the clearing of homeless encampments from Eureka's marshes.