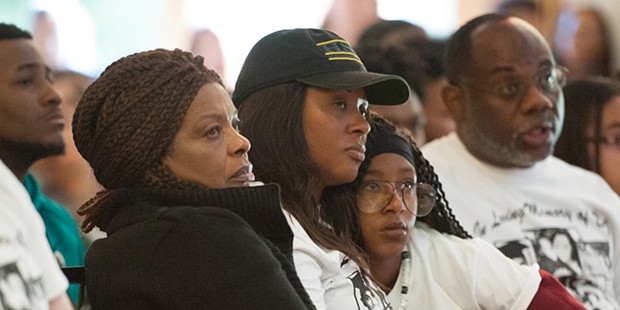 The civil rights attorney for the mother of slain Humboldt State University student David Josiah Lawson has filed a claim seeking at least $500,000 from the city of Arcata, alleging Charmaine Lawson suffered injuries including emotional distress and anxiety due to a "negligent" police investigation into her son’s death.

The 13-page document, the precursor to a civil lawsuit, outlines several instances in which former Arcata Police Chief Tom Chapman, who abruptly resigned his position April 10, allegedly lied to Charmaine Lawson about the investigation, including the assistance his department was receiving from other Humboldt County law enforcement agencies.


Filed on Friday, the claim also details steps the department reportedly failed to take from the first moments officers arrived at the scene of 19-year-old Josiah Lawson’s fatal stabbing at an off-campus party on April 15, 2017, to today.

Those include not properly securing of the crime scene, not responding to witnesses who asked to speak with investigators — including one who allegedly has video from the party — as well as not following the recommendations of former FBI agent Tom Parker, who was brought on to assist the APD.

Parker’s assistance was recommended to the city by Charmaine Lawson’s attorney Shelley Mack, who had previously worked with him on a death penalty case in the Bay Area.

Just before 5 p.m. on Monday, the Arcata City Council released a statement, which begins by stating “the City’s commitment to solving David Josiah Lawson’s case has not waivered.”

The release goes on to express the council’s concerns about the timing of Charmaine Lawson’s claim and Parker’s departure from the case and comments Parker and Mack have made to the media in recent days.

“Furthermore, the City is troubled that certain statements made by Mr. Parker publicly could endanger the investigation,” the release states. (Read the entire council statement below.)

According to Charmaine Lawson's claim, Parker's apparently unfollowed recommendations included conducting a metallurgy test on the murder weapon found at the Spear Avenue scene and knives from the catering kitchen where the sole suspect once worked to “compare sharpening striations” for shared common marks left by a sharpening tool.

According to the claim, “the catering kitchen has since been shut down, thereby destroying any opportunity to collect those knives,” but Parker observed knives from the same brand, Henkel, when he went to the kitchen.

Another suggestion reportedly not taken was to have a serology expert test “what appears to be a bloody swipe” on Kyle Zoellner’s pants from the evening.

Zoellner was arrested at the scene after witnesses described seeing him and Josiah Lawson engaged in an altercation, but a judge dismissed charges against the McKinleyville man due to inconsistent testimony during his five-day preliminary hearing last year.

Parker stepped down from his pro-bono consultation with the city on April 9, saying he could no longer work with an agency he believed was lying to him and ignoring the very advice he was brought on to provide.

“The truth is that neither the city of Arcata nor the Arcata Police Department have followed up on, and/or pursued, any of Mr. Parker’s recommendations,” the claim reads.

City Manager Karen Diemer has given a different viewpoint in a recent interview with the Journal, saying a “good portion” of Parker’s recommendations were followed up on but issues did begin to pop up over the course of his eight months of work on the case.

That included, she says, Parker making recommendations that APD didn’t feel it could do — things like obtaining warrants for specific types of work and requiring people to engage with law enforcement or come in to speak with investigators.

Parker and Mack spoke extensively about their concerns and frustrations with the case in an interview with KHSU host Lorna Bryant that ran earlier today and again tonight at 6, which the Journal was invited to join.

He called Diemer’s response to the APD not following up on his input, “bullshit,” saying serving search warrants and compelling witnesses to talk are all common investigative tools.

Read more on the Parker and Mack radio interview here.

Statement from the Arcata City Council:


Most importantly, the City’s commitment to solving David Josiah Lawson’s case has not waivered. The City is concerned about how the timing of Tom Parker’s departure from the case coincides with the filing of a claim by Attorney Shelley Mack and their multiple interviews with the media. Furthermore, the City is troubled that certain statements made by Mr. Parker publicly could endanger the investigation. The City appreciates the assistance received from Tom Parker.
Further the City agrees with Tom Parker that this case should and can be solved, which is why it remains our highest priority. There is an active and committed investigative team in place between the Arcata Police Department and the investigators with the District Attorney’s Office. Keeping this team in place provides the continuity and institutional case knowledge required to bring the case to completion. In November, Mr. Parker completed a review of the investigation. The Council met with Mr. Parker in December who painted a picture of the investigation that is very contrary to his recent media commentary. Over the last several months the City became concerned about potential disclosure of confidential case information. Breaches of his non-disclosure agreement would be damaging to a fragile investigation and as a result the City took steps to protect the integrity of the case. This included withholding certain case strategy and information.
The City received a claim on Friday filed by local attorney Shelley Mack. Such a claim is not uncommon to be filed in these types of cases to preserve the family’s legal options. This claim in addition to the previous claim from Kyle Zoellner further restricts the City from releasing information about the investigation or steps the City is taking to bring resolution.
The City understands that with the flurry of media comments and unproven allegations being made there are lots of questions. Many of these questions will be answered in due time, through case proceedings. The events of this last week have not deterred the investigative team from their ultimate purpose, which is to deliver a prosecutable case on behalf of David Josiah Lawson.