Retired FBI Agent: Lawson's Murder Can and Should Be Solved 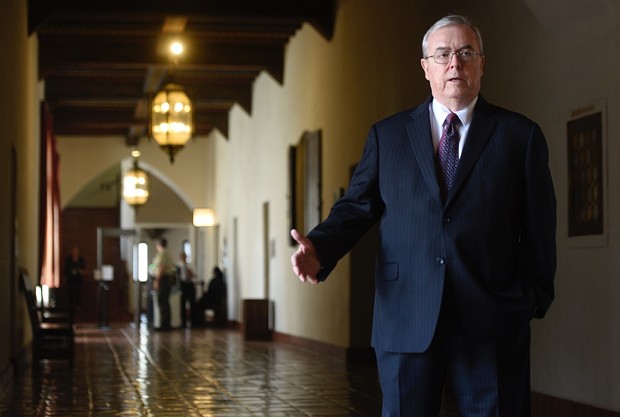 Tom Parker, a retired FBI agent who recently stepped down from assisting the Arcata Police Department’s investigation into David Josiah Lawson’s killing, says he’s convinced the case could be solved in just a few months, if not weeks, if he were able to bring the right people on board.

“We’d have this thing finished up,” he says, during a far-reaching KHSU interview the North Coast Journal was invited to join and which is airing today with host Lorna Bryant. “That’s not patting ourselves on the back. That’s the reality of this case.”

Joined by attorney Shelley Mack, who represents Josiah’s mother Charmaine Lawson pro-bono, both Mack and Parker expressed frustration with the lack of progress and by what they see as initial missteps by both APD and the District Attorney’s Office that have left the case unsolved.

Meanwhile, Parker says the case — which he has also been working on pro-bono — continues to languish with basic investigative steps left untaken and the recommendations he was retained to provide ignored, including collecting certain items and conducting a specific forensic test on the murder weapon that he believes would reveal vital evidence.

Instead he believes the department is intent on pursuing what he described as an investigative technique that “may have been logical in the very beginning but it had outlived the likelihood that it was going to work.”

Parker says when he began raising questions about why other avenues were not being pursued, “I basically got blank stares back from them.”

Parker says when he began raising questions about why other avenues were not being pursued, “I basically got blank stares back from them.” tweet this
After conditions he set down to stay — which included bringing on his own team to take over the investigation — went unfulfilled, and convinced that then Police Chief Tom Chapman was at best withholding information and at worst lying to him, Parker says he was left with no choice but to resign last week. Chapman would follow soon after.

Asked if he believes the police department turned over all the files in the case to him, Parker says he can’t be sure but what he did see raised red flags.

“To be very candid about it, if those were the complete files and all these holes did exist, it just added credibility to my observations and my opinions that there were major problems in this investigation with things not being done that should have been done and questions that were not asked that should have been asked of key witnesses,” Parker replies.

City Manager Karen Diemer didn’t dispute that a lack of trust emerged between Parker — the former assistant special agent in charge of the FBI’s Los Angeles field office — and the Arcata Police Department during an interview with the Journal on Friday.

Instead she offers a much different take on the status of the case, what brought about Parker’s resignation and the degree to which APD was following Parker’s recommendation.

The city manager says Parker’s review of APD’s initial response to the Lawson homicide and early investigative steps was generally positive and came accompanied by a list of recommendations and suggestions.

“I’d say a good portion of them were followed up on,” she says. “We took every point and every suggestion he made very seriously, and we met to discuss each of those points multiple times.”

But over time, Diemer says, a few issues emerged. She says some of Parker’s recommendations included things APD didn’t feel it could do — things like obtaining warrants for specific types of work, requiring people to engage with law enforcement or come in to speak with investigators.

Parker disputes any violation on his part, saying all he did was tell Charmaine Lawson — Josiah’s mother — about his unfollowed recommendation on the forensic test that he believes needs to be done, something that was not a risk to the investigation in his view.

And, he says, he had been upfront with Diemer and Chapman about his conviction that the city was making a mistake by not communicating more with the family.

“They deserve to know, they have a right to know what’s going on,” Parker says, adding that should always be the “first priority” in homicide investigations and family can often be an important source of information.

It’s a choice, he believes, that has fostered discord in the community, which marked the one-year anniversary of the 19-year-old Humboldt State University sophomore’s fatal stabbing on April 15.

The way Mack sees it, the response to Parker’s disclosure shows that city officials chose to keep the “victim’s mother in the dark rather than to advance the investigation and I think that’s one of the problems that has plagued this investigation the entire time.”

Josiah Lawson’s death also laid bare the undercurrent of racial tensions in the college town, with students of color coming forward at council meetings and city-sponsored forums in the wake of his killing to share their experiences with overt and subtle racism that has left many of them feeling unsafe.

Josiah Lawson was black and the only named suspect was white, but charges against then 23-year-old Kyle Zoellner were dismissed by a judge last year after a five-day preliminary hearing due to contradictory testimony from witnesses.

Parker and Mack both questioned why the District Attorney’s Office put nearly two dozen people on the stand instead of just the lead investigator and the witness or two needed to meet the lower level of probable cause required to hold a suspect over for trial.

While noting that Zoellner’s defense attorney took the unusual step of not waiving time — meaning the prosecution was rushed to prepare the case — and that the APD didn’t follow standard procedure in immediately notifying the DA’s Office of the homicide investigation, Mack says Lawson’s death wasn’t a “whodunnit” but the result of an altercation where “one person walks away, the other person dies of multiple stab wounds.”

“To me, it’s inexplicable,” Mack says, “other than they just decided to throw everything they had at the wall to see what would stick at the end of the day. That’s not a strategy.”

“So, it’s concerns me in a larger sense that Maggie Fleming is up for reelection with no opponent and that this is how high-profile murder investigations are handled in her office,” she continues. “That concerns me greatly for whoever might be the next victim in Humboldt County.”

“So, it’s concerns me in a larger sense that Maggie Fleming is up for reelection with no opponent and that this is how high-profile murder investigations are handled in her office,” she continues. tweet this
Parker says he believes the main reason why the case hasn’t progressed since then boils down to several factors, with the most pervasive one being a lack of leadership on Chapman’s part.

Noting that training was also a likely factor, Parker continues on to say there was one other possible addition to the list: “Is there a subtle racism that is like a wet blanket over this investigation? I don’t know.”

Mack was less couched on whether race may have been a factor.

She says the investigators currently tasked with the job are “essentially waiting for the phone to ring with someone to tell them the answer,” but it became clear months ago that the call wasn’t going to come.

For her part, Diemer says she’s confident the investigation is progressing.
“The investigative team, I would say, is all in complete agreement that the best investigative strategy is being pushed forward on this case,” she says. “I think there is an impression out there that it’s not advancing, and that impression is really inaccurate, based on what I know.”

Mack and Parker disagree, saying they see the current investigation on a course that’s just “not going to work.”

Meanwhile, Parker says he would have to think long and hard if he was offered an opportunity to resume his official role in the investigation but there are still ways he can contribute.