HSU's Cappa Picked by Buccaneers in Third Round of NFL Draft 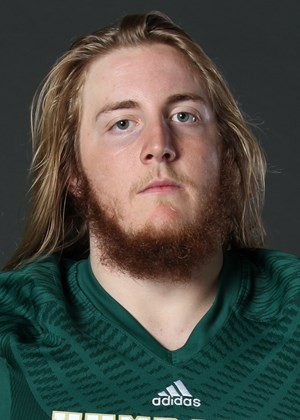 Humboldt State University offensive tackle Alex Cappa has been selected in the third round of the National Football League draft by the Tampa Bay Buccaneers, which traded up to get him, becoming the first HSU player taken in the draft in more than 25 years.

The 94th player chosen overall, the 6-foot-6, 305-pound Cappa was a dominant force for the HSU Lumberjacks, earning Great Northwestern Athletic Conference Lineman of the Year honors each of his four seasons at HSU.

Cappa was projected to be a fourth or fifth round pick by pundits, but the Buccaneers clearly targeted him, trading up to select him. ESPN’s draft analysis says Cappa is a good fit for the organization, which saw a couple of its linemen end last season with serious injuries and is looking to improve its run blocking, and described Cappa as a “tenacious run-blocker with a nasty disposition.” The sports network’s pre-draft analysis, however, couches expectations, saying Cappa “might never develop into a starter but has the mental and physical toughness to become an above average backup.”

HSU fans looking to get a glimpse of Cappa in the big leagues can look forward to Sept. 24, when his Buccaneers will square off with the Pittsburg Steelers on ESPN.