Where is HSU? Questions Go Unanswered at Community Dialogue on Race 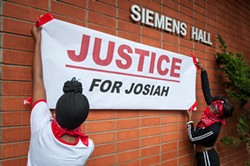 Community members are urging the city of Arcata and Humboldt State University for honesty and transparency. Of the nearly 50 people who attended Thursday’s Community Dialogue on Race at Arcata’s D Street Neighborhood Center, there was no one there to represent HSU’s administration. The dialogue began with about half as many attending as did last month and, about halfway through the forum, the crowd downsized to roughly 20 people. The crowd grew increasingly frustrated as questions directed toward HSU went unanswered, largely because there was no one there to answer them. Various community members felt that HSU administration’s absence was a statement itself.

What attendees were expecting were answers to 10 questions on their agenda, one of them being, “When will HSU join Arcata in working on race relations and safety?”

University Police Chief Donn Peterson, who was on the dialogue’s panel along with HSU Residence Life Coordinator Tina Okoye and Arcata Mayor Sofia Pereira, responded by saying, “It would be ignorant of me to presume how best to do that but there’s probably ways to get that done.”

“Out of the Equity Arcata Initiative, one of the safety components to that was to formulate, or to format, a chief advisory panel,” said Peterson “To have a student-led group that would enable me to really understand some of these issues from a perspective that maybe I’m not familiar with.”

Safety for people of color has been a growing concern following the killing of HSU sophomore David Josiah Lawson, who was stabbed to death on April 15, 2017. But systemic issues of racism have been present for decades. Derek Rosen, an HSU alum, took the floor to talk about an assault he endured in the early 2000s.

“This is still not the easiest thing to talk about but I was at a party and a white young man from the community decided to pull out a knife and stab me seven times,” said Rosen. “If it wasn’t for some fast-thinking friends, I would’ve bled to death.”

“If it wasn’t for some fast-thinking friends, I would’ve bled to death.” tweet this
The unnamed attacker was a local resident from Mckinleyville and, according to Rosen, it took months before APD followed up on the investigation. The man served minimal jail time. Rosen drove six hours to attend the forum and said he still remains in contact with the community, as his father works for United Indian Health Services. After Lawson’s murder, Rosen said he called and attempted to speak with an HSU administrator but no one answered. When he called the Arcata Police Department, he spoke to then Chief Tom Chapman. Rosen said he did not get much of a response, saying Chapman “gave a few grunts and hung up.”

While there are parallels between the attack on Rosen and what happened the night of Lawson’s slaying, Rosen survived, graduated from HSU and attended law school. But he said he still “has scars on his face, scars on his mind.” The Journal reached out to Rosen after Thursday’s meeting but he did not offer further comment.

Students and community members shared the sentiment that the university and the city are not being honest when recruiting students of color. People voiced their frustrations saying they feel like the university is setting them up for failure by not providing adequate resources.

A 33-year-old student and mother spoke about being recruited to HSU and the complete difference between how the university was marketed to her and reality. She continued to say that after finding a place in the community for her and her daughter, she now fears having her daughter in an environment where other children are not taught about diversity.

Concerns were also brought up in regard to UPD assisting APD during student-related calls. Peterson confirmed that UPD refers incidents to the student conduct code as often as possible instead of initiating a criminal proceeding. He also spoke about both police departments going through “fair and impartial” trainings, but people were quick to argue that there is a disconnect between trainings and reality. Others joined in to reiterate requests that the city and university remain honest and transparent. People also brought up the city’s lack of a public stance on the council’s decision to relocate the President McKinley statue. According to the mayor, all plans to relocate the statue are still in motion.

A few brief updates were given during the forum that were noteworthy. Interviews for an interim police chief have been completed and the city has identified its top candidate. No details were discussed by the mayor other than that the candidate is not currently working with APD and they are finding someone “suitable for the needs and issues” that have been discussed. Also, no updates were given on the Lawson case. Pastor Roger Williams of Seventh-day Adventist Church said that the purpose of the forum was to “discuss underpinning and local consciousness that leads to instances like Josiah’s death.”

These discussion will continue to on the fourth Thursday of every month. The next forum will be on May 24 and HSU President Lisa Rossbacher and Lawson’s mother, Charmaine Lawson, are expected to attend.