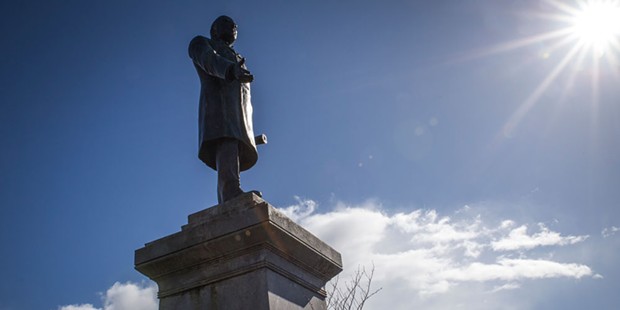 While those in favor of putting the future of President William McKinley’s statue before voters continue to gather signatures to place the issue on the ballot, a scoping meeting — one of the first steps in the monument’s removal — is scheduled for May 17.

The Arcata City Council voted 4-1 in February to take down the bronze work that has stood center stage in the plaza since 1906. Read previous coverage here, here and here.

The May 17 meeting will include a project summary, public discussion and potential alternatives to the removal to initiate the environmental review process that is required because the statue is considered a “historic feature” of the plaza under the city’s General Plan.

Meanwhile, proponents of maintaining the status quo have until the end of the month to collect 961 certified signatures of registered Arcata voters to put their case on the November ballot.


The City of Arcata announced today that the public scoping meeting regarding the removal of the McKinley statue will take place on Thursday, May 17 at 6 p.m. The current scope of the removal project determined by the Arcata City Council vote on Wednesday, February 21, is to remove and store the statue and amend the City’s General Plan, which identifies the McKinley statue as a part of the Plaza Historic District.

The McKinley statue is identified as a historic feature of the Plaza in the City’s guiding document called the General Plan, and this designation requires the City to complete an Environmental Impact Report (EIR) prior to taking further action. The intent of environmental review under CEQA is to describe the potential impacts of removing McKinley to city officials and the public prior to removing the statue. The primary purpose of this scoping meeting is to initiate the EIR process and allow for community input. At this meeting, the City of Arcata Community Development Department will present a project summary, discuss project alternatives and consider recommendations made by community members. Following this meeting, the Community Development Department will complete a Draft EIR and circulate it for 30 days, which is currently estimated to take place in June or July.

The public and other agencies will also have the opportunity to comment during this period. Next, the Community Development Department will respond to input on the Draft EIR and prepare its findings. The findings will then be brought to the Planning Commission, who will make a recommendation to the City Council. These actions will be made at public hearings, currently estimated to take place in late summer through October.

The current timeline for the EIR process is estimated at six months, which is subject to change based on the number of public hearings the process requires. The public scoping meeting will take place at the D Street Neighborhood Center located at 1301 D Street in Arcata. All interested community members are encouraged to attend. Public input regarding the environmental impacts of the removal process or suggestions for alternatives for the statue should be emailed to Senior Planner, Alyson Hunter, at ahunter@cityofarcata.org. For more information, call 707-822-5955 or visit cityofarcata.org/787/McKinley-Statue.