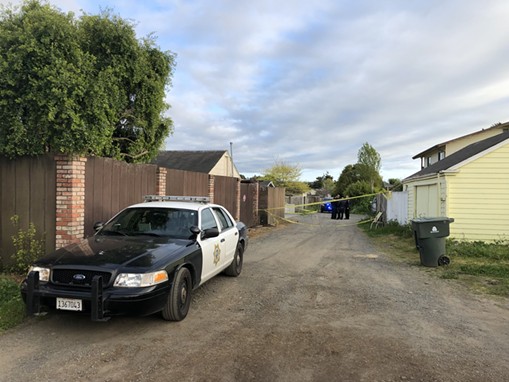 UPDATE: The Eureka Police Department has identified the victim of Sunday’s fatal shooting as Fortuna resident Sharral Lynne McDonald. She was 60.

According to the press release, the suspected shooter Ronald Allen Crossland, 52, who was later found dead in Fortuna of what police are describing as an apparent self-inflicted gunshot wound, knew McDonald, but did not specify their relationship.


On May 6, 2018, at about 4:52 p.m., officers with the Eureka Police Department (EPD) responded to a residence on the 3300 block of H Street in Eureka for the report of shots fired. Upon arrival, officers located a female with a gunshot wound and an uninjured female. The uninjured female told officers that the suspect, 52 year old Ronald Allen Crossland, fled the scene in her black Honda Accord. A Be on the Lookout (BOLO) was issued for Crossland and the vehicle. Lifesaving efforts were initiated on the female with the gunshot wound and she was transported by ambulance to the hospital, where she was pronounced deceased.
Next of kin has been notified and she has been identified as 60 year old Sharral Lynne McDonald of Fortuna. At about 7:22 p.m., the Humboldt County Sheriff’s Office (HCSO) located the black Honda Accord parked near the 2400 block of Fern Street in Cutten. The vehicle was unoccupied. Deputies and officers searched the area but were unable to locate Crossland. Just before 9:00 p.m., the Fortuna Police Department (FOPD) was searching for Crossland near the 300 block of North Fortuna Boulevard based on previous contacts at the location. While on scene, FOPD heard a single gunshot. Crossland was located with what appeared to be a self-inflicted gunshot wound. He was pronounced dead at the scene. Crossland was known to the uninjured female victim and McDonald; however, the exact motive of the shooting is unknown at this time. Anyone with information regarding this incident is asked to call Detective Bise at (707) 441-4109.


PREVIOUS: Eureka police continue to investigate the fatal shooting of a woman in a residence off the 3300 block of H Street that occurred shortly before 5 p.m. yesterday.

Officers responding to the scene reported finding the “deceased adult female” and that a suspect fled the scene in a vehicle, according to EPD Chief Steve Watson’s Twitter posts. The chief followed up a short time later to identify the suspect as 52-year-old Ronald Allen Crossland, who was last seen driving a black Honda Accord. Crossland was wanted for murder, Watson warned, and should be considered armed and dangerous.

About two hours later, Watson tweeted that the suspect’s vehicle had been found unoccupied near Redwood Fields in Cutten. Then, shortly before 11 p.m., Watson tweeted that Crossland “has been confirmed deceased in Fortuna. This is an active, fluid investigation and we’ll release more details later.” Scanner traffic from Fortuna seems to indicate Crossland died of a gunshot wound, though it’s unclear if it was self-inflicted or he was killed by someone else.

We've reached out to EPD for additional information and will update this post when it becomes available.