What Is Going On With the Beer at Oyster Fest? 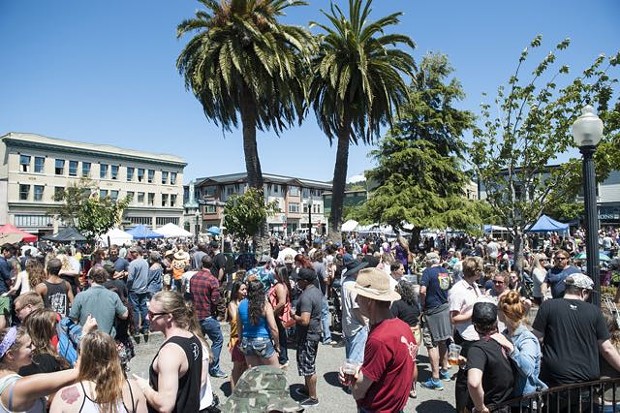 The Arcata Bay Oyster Festival, a notoriously big and boozy annual celebration of all things bivalve, has been the subject of a rumor mill in the hops-and-barley  set lately. Several local brewery owners told the Journal that the event — which in the past has seen its organizers dogged by controversy about their choices to fence the Plaza or charge admission — will not feature any local beer this year, but is instead going with an out-of-town corporate brewer, Lagunitas.

Arcata Main Street Executive Director Jeanette Todd soundly rejects this rumor, saying that local brewery Redwood Curtain Brewing Co. and Crescent City-based Sea Quake Brewing will both be pouring, not Lagunitas. But things are tense, largely due to a March meeting between Todd and several local brewery owners, a meeting from which participants came away with widely different perceptions.

In Todd's version of events, the festival — scheduled for June 16 — looked to tighten its belt and reduce the wait time in lines this year. Rather than pay for beer, they decided to hit up all of the usual participating breweries for donations and to only request one or two varieties of beer from each. That, Todd says, would make the line shorter as drinkers would have fewer choices on the menu board. (The line has, apparently, been known to take an hour to get through.) The festival's beverage committee stopped off first at Lost Coast Brewery, making a handshake deal for a 50-keg donation, according to Todd. The committee had with them a list of possible donors that included Lagunitas, although Todd says she didn't plan to ask the Heineken-owned brewer for donations.

When news of the donation drive and the list hit the brewery party line, Todd received a call from Meredith Maier, owner of Six Rivers Brewery. Todd says Maier said the organizers should go to the breweries as a group, instead of doing individual asks. Todd said they would stick to their plan. Their next stop was Mad River Brewery. But when they arrived for what they thought would be a one-on-one meeting, they instead found a crowded table with representatives from all the different breweries, angry and demanding answers.

The breweries allegedly wanted a version of their previous deal with the organizers, which was a combination of donation and purchase. Maier says her brewery offered a one-for-one deal, meaning they would donate one keg for every one purchased by the festival. Todd, speaking about all of the breweries, says that in past events very little was donated, with the festival spending $25,000 on beer last year, with 140 kegs purchased and only 10 donated.

Todd's version of events describes the outcome as a cabal of brewers shutting the festival out.

"It was a pandemonium," she says. "They created a brewery pact, made it so we couldn’t talk to any of them. They basically started what I would consider price fixing, offering terms that we couldn’t work with."

Lost Coast Brewery, Todd says, also reneged on its handshake deal after pressure from the rest of the breweries. We reached out to Lost Coast Brewery for a statement but didn't hear back. Redwood Curtain Brewing Company also did not return our calls but owners Amanda and Drake Mollberg posted a comment on this story after it was first posted (see below), saying, “We had a pleasant, mutually respectful and individual fact-to-face meeting with Jeanette Todd of Arcata Main Street. Arcata Main Street has supported our small, family-owned brewery for years and we, in turn, have supported their nonprofit needs.”

Ted Vivatson, president of the Eel River Brewing Company, came away from the meeting with a totally different memory of events.

"It was kind of unnerving," he tells the Journal. "We were contacted and basically told that we needed to donate 100 percent of the beer or they would go with a multinational conglomerate that would donate 100 percent. I was like, 'Wow, that’s kind of crazy coming from Arcata that’s so anti-corporate.'"

"I was like, 'Wow, that’s kind of crazy coming from Arcata that’s so anti-corporate.'" — Ted Vivatson, president of the Eel River Brewing Company. tweet this
Vivatson declines to state which multi-national conglomerate he was referring to  but other sources confirmed that Lagunitas was the company whose name appeared on Arcata Main Street's "ask" list.  Lagunitas founder Tony Magee did not initially respond to the Journal but commented online after this article was originally posted (see below), saying his company has a long history of donating beer for nonprofits that predates its corporate ownership. “We’ve always done it on principle. The fest has always been cool and it’s cool to be able to help,” he writes. “That’s all there is to say about it ... the great local brewers should be involved, too, and help the event in any way they can.”

Neither Todd nor Arcata Main Street Board President Victoria Joyce would say that pouring Lagunitas beer was entirely off the table, with Joyce saying they did not currently have a contract with the company and Todd saying the nonprofit board was "always looking for support."

The meeting at Mad River Brewery, Vivatson says, did have a "bullying" vibe, but that it was all on the part of the festival organizers.

"They said, 'You donate the beer or we will go with an unnamed-multi-national corporation,'” he claims. "Everybody at that meeting heard the same thing I did."

Vivatson says the advantage of vending and donating at an event such as Oyster Festival is that you get to introduce your product to many new potential customers. He and other brewers, he says, support many other local events such as the Benbow Summer Arts and Music Festival, the North Country Fair and the Fortuna Rodeo.

"These kind of events keep a lot of money in the local area," Vivatson tells the Journal. "What I always tell people is we like to break even in these kinds of things. We have a responsibility not only to the community but to our employees, to keep the door open. I don’t see this as a good thing for anybody."

It appears as though both sides are feeling a financial pinch. Maier says the recent trend of smaller craft breweries being bought out by large corporations makes those in the local industry anxious, and that they felt the need to "stand their ground." Todd says Arcata Main Street has been seeing less revenue from the festival in recent years and, as it's the organization's sole fundraiser, the organization has to be nimble. At the core of the dispute, however, appears to be a push and pull over some very Humboldt values.

Maier, speaking about the negotiations, describes the issue as a departure from the traditionally hyper-local focus of the festival.

"They are not playing in the spirit of Humboldt or Arcata," she says of Arcata Main Street.

Editor's note: This post has been updated to include online comments posted here by representatives of Redwood Curtain Brewing Company and Lagunitas.