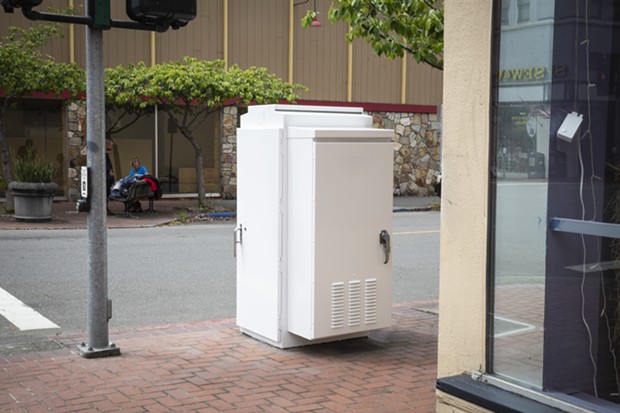 In the week since she stood before the Eureka City Council to lament the brightly painted utility box out in front of her business, Molly Green has received a lot of backlash, some from thousands of miles away.

The rift began when Green showed up at her business near Fifth and G streets in Eureka — SCRUB Spa and Event Venue — to find that, without her knowledge or approval, the utility box out front had been painted with a bright, whimsical mural titled “Cat Food” that featured a variety of food-shaped felines. A few days later, Green voiced her displeasure to the Eureka City Council, calling the mural a “really large, ugly, poorly done eyesore” and threatening to campaign vigorously against each of the councilmembers unless they did something to make the mural go away.

The post ended up on the front page of Reddit, an American social news aggregation and discussion website, with a note revealing all of Green’s personal contact information. In an interview, she played the Journal a voicemail from New York in which an unidentified man refers to her as a “cunt,” “a moron” and “uptight.”

“Congratulations, now everyone in every fucking state knows what a piece of shit you are. From California to New York,” he said.

In regard to the public backlash, Green wanted to clarify her position.

“I absolutely am a supporter of local art,” she said. “Yes, I was angry but I don’t think people realize the emotion it takes to get up there and stand up for yourself. Our city officials should be supporting business as well as try to grow the arts community.”

Green added that she doesn’t even oppose the utility art box project, just the idea that boxes would be reimagined without input from those who may be impacted.

“There is no opposition whatsoever to there being art on the box — I was opposed to the idea that as the business owner that [the city] didn’t consult me on what type of effect this might have on the business that I run,” Green said, adding that a client told her she would not book SCRUB as the venue for her Christmas party because of the “Cat Food” art box. The Box Art project, which is making over utility boxes throughout the city with bright murals by a variety of artists, is part of the city’s Strategic Arts Plan put in place in 2017. The plan focuses on 35 projects designed to improve exposure of, access to and respect for arts and culture in the community by paying local artists to paint murals throughout town, including on utility boxes.

The Box Art project featured a competitive selection process open to individual artists, or community groups with a designated lead artist, who have “the vision and skills required to complete the project to the highest standards of innovation and technical expertise.” The city’s Arts and Culture Commission reviewed the submitted proposals and selected artists were linked with a sponsor, given $500 and assigned a utility box to paint.

The development services department did some public outreach prior to finalizating its plan, including 20 stakeholder interviews, and a focus group with 60 individuals from 14 different organizations, a public meeting attended by about 150 people and an online survey with 800 responses, according to Holmlund.

And, as a part of this public engagement initiative, the city said development services staff handed out fliers to local businesses and encouraged them to become sponsors for the project. If an owner declined to participate, he or she had no say in the art.

As reported by the Lost Coast Outpost, Councilmember Heidi Messner said Green could have avoided this situation if she had simply involved herself in the Art Box project earlier.

“She chose not to participate. So it’s on her,” Messner said.

But Green isn’t the only one upset. Janeen Hess, owner of the Grind Cafe on Fifth Street, said she never received a sponsorship
flier and only found out about the art once she saw the artist outside of her business. She said she’s considering talking to the city about having the box redone, like the one near SCRUB, but doesn’t know if it is worth the $500 fee.

“It seemed disrespectful as business owners for us to not have more input,” she said.

Hess added she would have preferred the project to be more artistically cohesive, as she believes it is not appealing to have art that varies from box to box. She also wishes that the art would showcase the assortment of local attractions in Humboldt.

“We are in one of the prettiest places to live and this project doesn’t seem to showcase the best of Humboldt to me,” she said.

House of Nice owners Rachel and Caroline Griffith said they also didn’t receive notification from the city but that they were aware of the situation before any murals were painted by their business. They both believe it isn’t necessary for business owners to be notified.

As to the offending “Cat Food” mural that sparked the controversy, it was by local artist and Humboldt State University alum Samantha Moore, who was sponsored by Redwood Capital Bank. The city is planning to pay Moore another $500 to repaint the mural on another utility box in town.

Green said she told Moore she wasn’t angry at her but at the city for the lack of communication. Green even offered Moore a chance to showcase her art at SCRUB for Arts Alive in the future. Moore declined.

“After all that has happened I am just going to stay away. I don’t feel like that is the best choice,” Moore said.

This all has been quite an experience for Moore, as well. She’s been accused on Facebook of publishing Green’s personal information on that Reddit thread — she said she doesn’t even have Green’s info — and picked up some new fans, one of whom even got a feline tattoo paying homage the utility box mural. Moore’s also seen a boost in T-shirt sales and launched a Kickstarter campaign to sell some more.

As far as the now blank box near SCRUB, that will fall under the charge of David Witter, a local artist who works for the city's sewer department. Witter is self-sponsoring a mural to showcase the beauty of Humboldt, with redwood trees and a swimming hole called Goat Rock located off State Route 36.

“I feel like I am such a good artist and I always wanted to do something out in public,” Witter said.

According to Witter, the box wasn’t in the best condition from the prior mural. There was a lot of primer in some spots and not enough in others, so he stripped it down to bare metal to prepare the foundation for his mural.

“I am going to take my time and do the best job I can,” he said.

Green has seen Witter’s design and said she loves it.

Kaitlyn Bryson is a Eureka native and a freshman at Emerson College in Boston, where she studies journalism.