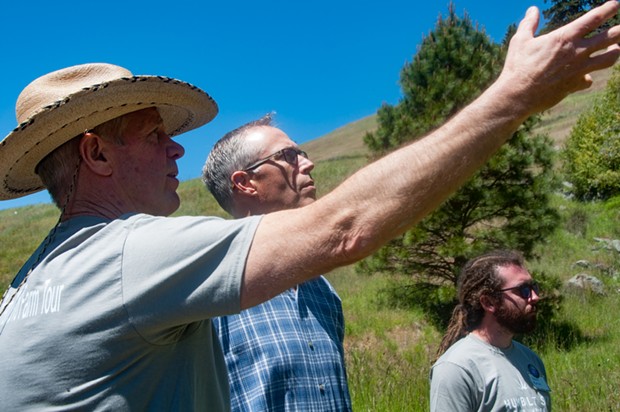 Editor's note: This story first appeared on www.kymkemp.com and is reposted here with permission.

With pot prices plummeting, it can sometimes feel as if Humboldt’s economic sky is falling. But on a federal level, the interest in easing restrictions on ganja is growing. North Coast Congressman Jared Huffman visited a smaller-sized cannabis farm Friday in what might indicate an interest on his part to join some senators pushing decriminalization.

According to a 2014 Mother Jones article, Huffman said our district grows 60 percent of the marijuana produced in America, so a national policy change could have a dramatic effect on the area.

The Marijuana Justice Act, introduced by New Jersey Sen. Cory Booker, would end the federal criminalization of cannabis by pulling it from the federal Controlled Substances Act and has gathered support in the last few months. A number of high profile lawmakers, including three other potential presidential candidates, California Sen. Kamala Harris, Vermont Sen. Bernie Sanders and New York Sen. Kristen Gillibrand co-sponsored the bill. If passed, it would clear some of the hurdles that prohibit interstate commerce of cannabis.

In April, top Democratic Sen. Chuck Schumer announced that he was introducing separate legislation to decriminalize marijuana and John Boehner, the former Republican speaker of the House, announced that his “thinking on cannabis has evolved” and he’s joining the board of a cannabis corporation. In addition, Canada will vote on a bill to legalize recreational cannabis June 7 and, according to the most recent Pew Research Center Survey, 61 percent of Americans support legalization.

When Huffman toured the Humboldt Sky farm near Garberville, he listened to the concerns of 20 or so farmers and business owners but made it clear that he could do little to affect state policy as a federal congressman.

Nonetheless, there were several concerns in which he seemed particularly interested. Landowner Robert May noted that the mold and fungus standards for cannabis are much higher than those for other agricultural products including tobacco.

“They’re so strict that we can’t recycle bags used to hold cannabis,” May explained. “We have to throw them all away after one use. [With the new standards], we’ve gone from being very concerned with recycling to throwing away many, many bags. … They are mandating pollution.”

Another environmental concern May brought to the congressman’s attention was how much power marijuana grown indoors uses compared to that grown outdoors or in solar-powered greenhouses. 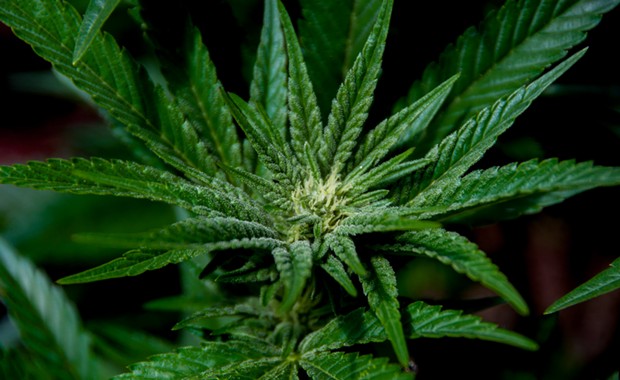 According to the Seattle Times: “[Indoor] pot production often uses hospital-intensity lamps, air conditioning, dehumidifiers, fans and carbon-dioxide generators to stimulate plants and boost their potency, … The power-hungry crops rival data centers or server farms in intense use of electricity, according to a peer-reviewed study last year in the journal Energy Policy. One kilo, or 2.2 pounds, of pot grown indoors, the study says, leaves a carbon footprint equivalent to driving across the country seven times. Producing one joint is equivalent to leaving a light bulb on for 25 hours.”

When a similar statistic was recounted to Huffman, who recently introduced a bill to protect solar jobs, he said, “That doesn’t make any sense.”

Another issue that caught Huffman’s attention was brought up by Barry Nachshon, the CEO of True Humboldt, a brand that represents sun-grown cannabis farmers. He explained that anyone transporting anything commercially requires a dual state and federal permit. And since the federal government currently treats cannabis as a crime, Nachshon said, “The whole state is transporting illegally.” (See more about this here.)
“That isn’t sane,” Huffman said. “This is something I can take to my colleagues and see if there can’t be some fix.”

As with most gatherings in Southern Humboldt this year, the decreasing income for brick and mortar storefronts was discussed. A former business owner brought up that falling marijuana prices and the increasing expenses of growers struggling to meet legal permit requirements had cut the gross take on his previous business by 40 percent in six months. He pointed out that sales tax income was going to drop precipitously in Humboldt County. Another business owner pointed out that this, in turn, would cut money to fix roads as well as support for fire and law enforcement.

May, the landowner, pointed out during Huffman’s visit that the regulations in the county were allowing other areas of the state to shoot ahead of the one-time cannabis leader.

“Humboldt County is getting its clock cleaned,” he said. “Much of the regulations are good, environmentally sound, but hard to do all at once.”

“Humboldt County is getting its clock cleaned,” he said. “Much of the regulations are good, environmentally sound, but hard to do all at once.” tweet this
Nonetheless, he was still hopeful. He pointed out that the county was built on the nimbleness of small entrepreneurs. “The hoop house was invented in Humboldt,” he explained, nodding to the greenhouse that allowed his brand to bring in two harvests a year.

“We cover [the hoop houses] with tarps, force [the plants] to flower early and we get in two harvests before full term,” explained Adam Rollins, the cultivator for Humboldt Sky. He said that if they used large amounts of electricity, they could get even more harvests but that this way they keep their costs down and their environmentally-friendly standards up.

As Huffman was leaving, the congressman stated that some of the problems faced by cannabis farmers were “inherent with small businesses, but some are unique to this business.”

He acknowledged that the recent change to recreational cannabis was bumpy but he urged the farmers to “stay the course and persevere because I don’t think we are going back to prohibition.” He pointed out that although in many ways big canna-business has the edge, he still thinks that “there is room for the little guys that are a little more risk-friendly.”

He recommended working with more traditional businesses like ranches and forest owners who have similar issues, saying that working together there might be state money in the form of grants to clean up environmental issues.

“I don’t know why you wouldn’t have the same access as wine grape growers,” Huffman said. “You can’t go it alone on these kinds of issues.”