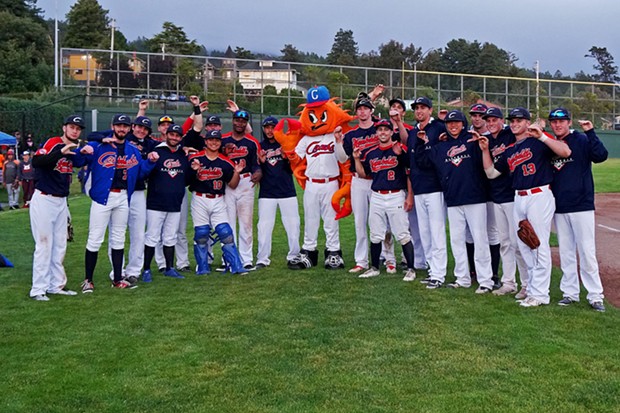 Ladies and gentlemen, grab your reusable cups and your Ricolas because it’s Crabs season in Humboldt again. And this season, the Journal will be posting recaps of weekend games in Arcata.

The Crabs wrapped up a bittersweet opening weekend, going 1-1 against their rivals of yore, the Corvallis Knights.

Friday, June 1:
I arrived at 6:10 to a line from the ticket stand to F Street. Blankets covered the bleachers and, though beer isn’t served until 6:30 p.m., folks were lining up for libations, nearly to home plate already. Crabs fans certainly have their priorities in order. By 6:45 p.m., the stands were packed shoulder-to-shoulder, the Crab Grass band (who are in fine form this year, complete with pocket trumpet and plastic trombone players) had harmonized and taken their seats, and folks were finishing up their pre-game beers.

Seven o’clock came around and the lights flickered on and, after some protracted thank-yous and introductory remarks, the Humboldt Harmonaires sang a rousing rendition of our national anthem in their trademark shimmering periwinkle vests, a spectacle unto themselves.

The Crabs tapped Alex Pham to start on the mound and he let up a leadoff single but escaped the first inning facing only three batters.

Carson Cunningham, the Knights' opener, was in for a different first outing. Crabs leadoff hitter Bronson Grubbs worked a full count before flying out to center field. Cunningham would then go on to walk three out of the next four batters, loading the bases with two outs and then zinging a wild pitch past the catcher allowing Kokko Figueiredo to score the first run of the season. Crabs fans could not have been more pleased, offering up an extended round of cheers and heckles.

The Knights bounced back with two runs of their own in the top of the second, though it was all they could muster for the night. Pham’s pitching was simply too strong, going six innings and striking out eight.

But Crab Jackson Kritch would tie the game in the bottom of the fifth with a leadoff freeway ball, and it was all downhill for the Knights from there. McCarthy Tatum led off the sixth with a double. Knights reliever, Logan Nousen, got two outs before walking Otis Statum and Welsey Ghan-Gibson on eight straight pitches (leading to the Heckle of the Night) and beaning Kritch to give the Crabs the lead and ending Nousen’s night. Grubbs singled off the new reliever, driving in Statum and Ghan-Gibson and Figueiredo followed suit, driving in Kritch. Crabs would end the sixth up 6-2 and some truly expert pitching by Zach Wallace (one hit, seven strikeouts in three innings) would make it the final score. 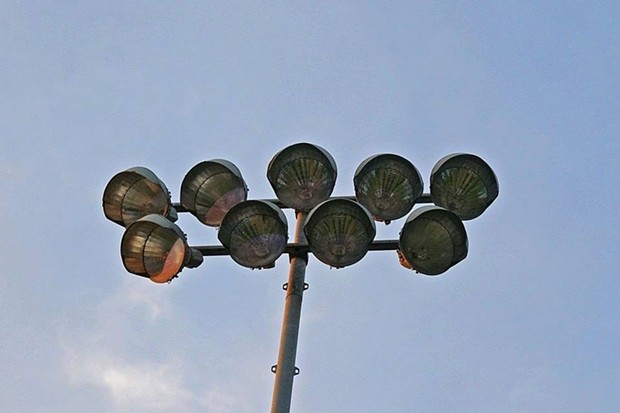 Saturday, June 2:
What was meant to be a three-game series was cut short before the fourth by malfunctioning stadium lighting, and what a disappointment it was. The Crabs brought their big-boy bats on Saturday, racking up six runs in only three innings.
The stadium lights power comes, unexpectedly, from Kansas City and are set to turn on remotely at 8 p.m. Some cloud cover darkened the park earlier than expected, so a call was made to get the lights on earlier than usual. This is rarely an issue but Saturday a power surge caused the lights to turn off automatically. A group of men crowded around the breaker, searching for a manual fix to no avail. After almost an hour of tribulation and deliberation, officials decided to cancel the game. A game must go at least five full innings for a decision to be awarded and so six glorious Crabbie runs faded into the ether.

An electrician was scheduled to take a look at the breaker on Monday, June 4. Should no fix be readily apparent or feasible, all further evening games will be pushed up to avoid the issue. What time, though, is uncertain at time of writing.

Sunday, June 3:
The final in a three — er, two-game series, was a tough one to swallow. Fired up from the beating they narrowly escaped and some decidedly un-choice heckling from the crowd (more on that later) Saturday night, the Knights came to play.
Led by an error and a marching advance of singles, the Knights loaded the bases early and put up three runs in the first. Our Crabs were lucky to escape with only that many on the board.

From there on out, it was a mire of stranded baserunners, poor calls and missed opportunities. The Knights would tack on two more runs: one in the fifth and one in the ninth as final nails in the coffin, completing a 5-0 shutout on an otherwise beautiful Arcata day.

Some highlights: Jared Milch, despite his starting woes, put in four solid innings on the mound, striking out seven and walking nobody. Jackson Kritch shows real poise at the plate, as does McCarthy Tatum. The Crabs did not roll over, even a little bit. Chase Larsen worked a walk on an 11-pitch at bat in the bottom of the eighth with two outs. I’ve never heard such cheers for a trot down to first. The ladies from the Humboldt Roller Derby showed out in the Heckle Section.

Upcoming Games:
Crabs have a two-game homestand against the San Francisco Seals Tuesday, June 5 and Wednesday, June 6. Wednesday is #24 Scott Eskra night, to honor the memory of former Crabs Third Baseman Scott Eksra. Fans are encouraged to wear his initials or his number to the game.

Cheers and Jeers:
Cheers to the Crabs, for going 2-1 (if you count the moral victory) on opening weekend and previewing an exciting summer of baseball to come.

Jeers to the folks (not the derby ladies) who reserved seats in the always sellout Heckle Section and only showed up on Sunday. You know who you are.

Cheers to the Swag Booth for selling beer tickets to those who forgot to bring cash.

Jeers to the dude caught drinking from a flask and booted. If you’re gonna break the rules, be tactful.

Cheers to him being the only kick-out all weekend!

Big, hearty jeers to the “heckler” on Saturday cussing out the Knights. Lobbing unvarnished invective at an opposing team is a bad look, man. It isn’t clever, it’s against the code of conduct, and it’s just deeply lame. You’re lucky the park manager didn’t give you the boot.