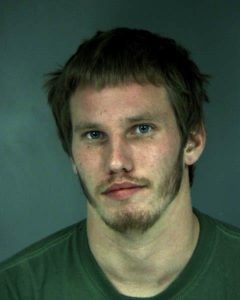 UPDATE:
The Humboldt County Sheriff’s Office reports murder suspect Zach Harrison is being held on $1 million bail after being arrested by the Eureka Police Department this afternoon.

The EPD received a tip on his whereabouts at 1:17 p.m. and took him into custody 11 minutes later while he was walking in the back parking lot of the Bayshore Mall. Harrison, a suspect in the September of 2017 fatal shooting of 58-year-old Robert James Holtsclaw in Alderpoint, has alluded capture several times over the last nine months.


A Southern Humboldt man wanted on charges of homicide was taken into custody this afternoon by the Eureka Police Department. On June 6, 2018, at about 1:17 p.m., the Eureka Police Department received a tip that a subject matching the description of homicide suspect Zachary Harrison was observed near Truesdale St. in Eureka, walking north through the back parking lot of the Bayshore Mall. Eureka Police officers located Harrison walking in the parking lot near Walmart. He was taken into custody without incident at about 1:28 p.m. Harrison was booked into the Humboldt County Correctional Facility on charges of homicide. His bail is set at $1 Million. The Humboldt County Sheriff’s Office would like to thank the Eureka Police Department for their assistance in apprehending Harrison, the citizens of Humboldt for the numerous tips as to Harrison’s whereabouts and all of the local agencies who aided in the search for Harrison. Anyone with information about this case or related criminal activity is encouraged to call the Sheriff’s Office at (707) 445-7251 or the Sheriff’s Office Crime Tip line at (707) 268-2539.

UPDATE 2:21 p.m.: EPD Chief Watson stated by text, “Around 1:17 PM, a caller reported to EPD dispatch seeing a subject matching Harrison’s description walking near the foot of Truesdale. EPD officers responded and began searching the area. One of our officers found him in the Walmart parking lot and had him in custody by 1:28 PM.

UPDATE 2:17 p.m.: According to Eureka Police spokesperson, Brittany Powell, a “citizen tip that someone matching his description was seen on Broadway” led to Harrison’s arrest. “EPD officers searched the area and located him,” she wrote in an email.

PREVIOUSLY:
At approximately 1:30 p.m. today, Zach Harrison was arrested in Eureka. Harrison a suspect in the shooting death of Robert Holtsclaw on September 23 of 2017. Harrison has repeatedly slipped from law enforcement’s clutches as he navigated his home territory near the rural community of Alderpoint. From high-speed pursuits in vehicles and running through the night woods to swimming the raging waters of the Eel River, Harrison managed to wriggle his way from massive law enforcement pursuits that involved everything from a helicopter to a jet ski.

Humboldt County Sheriff’s spokesperson Samantha Karges confirmed that Eureka police arrested Harrison but she didn’t know any of the details at this time.

Calls and messages to the EPD have not been returned.