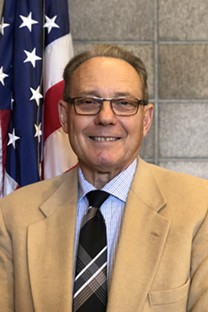 Arcata will have a new police chief in town, at least for a while.

The Arcata City Council voted last night to appoint Richard “Rick” Ehle interim chief of the Arcata Police Department and he is slated to assume the role Monday.

Ehle is a 47-year veteran in law enforcement who served the bulk of his tenure with the Oakland Police Department. His last permanent gig was as the chief of the Capitola Police Department, where he served until 2010, and he recently served stints as interim chief in Ione and Parlier, California.

“Chief Ehle’s leadership will allow our existing personnel to maintain their current focus and his experience will provide opportunities for the department to grow,” Arcata City Manager Karen Diemer said in a press release. “I am thrilled to have someone with his background assist the city of Arcata during this transition period.”

Lt. Bart Silvers has been serving as the city’s acting police chief since the abrupt resignation of former Chief Tom Chapman in April. Chapman stepped down without notice less than 24 hours after a former FBI agent contracted by the city to consult on the Josiah Lawson homicide investigation resigned his role. The consultant, Tom Parker, said he chose to sever ties with the city after he came to feel the department wasn’t following his recommendations and had been dishonest with him amid the investigation into the April 15, 2017 stabbing death of Lawson, a 19-year-old HSU sophomore. That crime remains unsolved and has caused deep racial tensions in the city to bubble into public view.

“Arcata is a truly special place and I look forward to working closely with members of the community, police department, city staff and other Humboldt County law enforcement agencies,” Ehle said in a press release from the city. “The Arcata Police Department will continue to provide excellent public safety services to our community and I am honored to be entrusted with the responsibility of leading the Arcata Police Department as the interim police chief.

See the full press release from the city here.