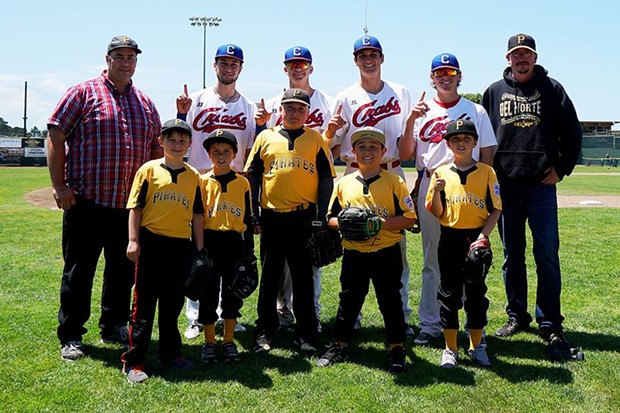 Since a crushing shutout on June 3 against the Corvallis Knights, the Crabs have scored 60 runs and ripped off five consecutive wins.

On the heels of pouring a 15-run deluge on and eking out a 4-3 victory in the 12th Friday night, inning against the San Francisco Seals, the Crabbies welcomed the Valley Bears of Fresno to Arcata Ball Park for a three-game weekender. I was unable to attend Friday night but by all accounts it was an unfriendly introduction as the Crabs cruised to an 11-1 victory and the game ended after the seventh inning due to an agreed upon 10-run rule — that would be the only run the Bears scored all weekend. Not a single Crab struck out and Crabs pitcher Alex Pham had a stellar second appearance on the mound. He threw all seven innings, allowing only four hits and no walks and striking out a staggering 15 batters. The University of San Francisco freshman is looking to be a real asset.

Crabs pitcher Jared Milch returned to the mound, looking to bounce back after a rough first outing against Corvallis and bounce back he did. He went five innings, fanning nine Bears and walking none while giving up a meager three hits.

But the story of the weekend was the bats. Every Crab down the order got a hit Saturday night, racking up 14 hits total en route to an 11-0 shutout (no 10-run rule was set for the Saturday and Sunday's games) and scoring in all but two innings where they saw the plate. The Bears’ set up deep in the outfield all game, with the center fielder cheating right, and the Crabs

abused this gap for extra base hits all game. Bronson Grubbs continues to be a solid leadoff man, roping a triple and an RBI single. Shortstop Kokko Figueiredo had perhaps the best night at the plate for the Crabs, going 3-5 and scoring three runs.

A nice change of pace, there was none of the acrimony at last Saturday’s game (though the tone of all non-Crab Grass Band games is a
bit more dour). Trademark heckles faded in the fifth inning as the Crabs
took a commanding 10-0 lead and fans chose instead to delight in the drubbing.
Special guests Eel River Yankees, the Eel River Little League champions now in
the Tournament of Champions, sat along the third baseline having a dabba doo
time. They are playing in the tournament semifinals today at 5:30 p.m. in Arcata.

The weather was almost oppressively nice for the final game in the series. It was Little League Day and the debut of the Crabs-themed

Redwood Ed-venture quest so, dear reader, you will know it’s only slight hyperbole when I say there were millions of children in attendance.

Behind the frenzied cheers of the sugar-addled youthful horde and endless permutations of "Go Big Red," the Crabs' traditional fight song, the Crabs shellacked the Bears to the tune of a 19-0 shutout. It would have been brutal if it wasn’t so much damn fun. After a first inning in which the Crabbies left two stranded, Crabs Catcher Ramon Enriquez parked a two-run shot to dead center field in the bottom of the second. And so began the Crabs cavalcade (shortstop Wesley Ghan-Gibson would put another two run bomb onto the freeway in the seventh). They would score in every inning after while holding the Bears to a paltry five hits and an ignominious five errors.

Perhaps the most competitive part of the game was the field game in the middle of the third. Four youngsters were thrown into the gauntlet of a crab-walk obstacle course. After a couple early falls, Red Shirt Kid found his form and powered through the cones and crab-sprinted into a leaning, come-from-behind victory at the line. It was spectacular.

One benefit of a blowout, is that it offers plenty of free time. On my way to get a …pretzel, I stumbled across something amazing. A stocky, bearded man named Brice Gummersall was standing at the top of the ramp towards the first-base concessions holding a piece of paper. Since I’m a big time reporter now and I get to be nosey, I peeked over his shoulder as I walked past.

It was a homemade bingo board. Turns out for the past three years, Brice and a group of friends have been going to nearly every Crabs game and
playing Crabs Bingo. Each year he makes a new board with about 40 selections, inputting them into an online bingo maker that randomizes the squares to create a unique card. Selections, referring to both the game and the audience, include “cup
readjustment,” “socks with open-toed shoes” and “triple.” I asked him what the
prize was.

“If anyone beats me, they get a beer,” Gummersall said, his beard veiling a wry smile. Sunday, though, Gummersall reigned supreme, getting bingo well before the game ended.

Crabs are on a two-game roadie this week to Redding, playing the aptly named Colt 45s, but will return this weekend for a three-game homestand against the Seattle Studs (brag). Start drinking water now, folks, because Saturday is Oyster Fest and Sunday is Father’s Day.

Cheers to the gentleman in the tan Scarface suit at Saturday’s game. That’s a bold move, my man.

Jeers to yours truly, for incorrectly calling out folks from heckle section in my last piece. Turns out, a member of the group did show on Friday, but the seats were already usurped by restless hecklers. My apologies, two out of three ain’t bad.

Cheers to the Crab Grass Band for 35 years of gaiety and awesome music. Y’all make the games so much fun!

Jeers to the dude booted for vaping in the stands on Saturday. If you want to puff fat clouds, just step outside. (There was another kick-out that night, bringing the grand total to three unlucky souls.)

Cheers to the Valley Bears for taking one on the chin Friday night and then dispatching with the 10-run rule. Pride may be a sin but it’s the best one.

Heckle of the Weekend

After a four-pitch walk by Bears reliever Jose Toledo, someone shouted “Toledo tomato!” Let’s call the whole thing off.

If you hear a great heckle, see something interesting, have great photos, or want to reproach me, send an email to sports@northcoastjournal.com