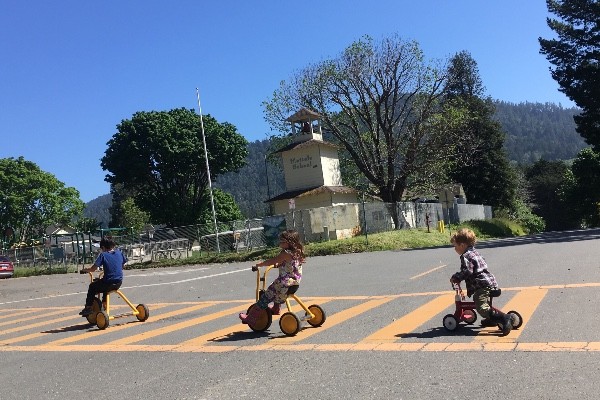 Petrolia locals have taken on an ambitious project: a one-mile pedestrian path stretching from the George C. Lindley Memorial Bridge to the Petrolia General Store in an effort to make a safer walking environment for children. The project is expected to begin this summer.

On May 17, 2017, Petrolia resident Darlene Santner was clipped by a truck while pushing her toddler in his stroller on the side of Mattole Road. For Santner, who was then pregnant with her second child, this opened her eyes to just how unsafe it was for kids and adults alike to walk in the sidewalk-less town. Petrolia has a population of roughly 400 to 600 people and many of the community's events take place within walking distance of residential hubs. When Santner contacted First District Supervisor Rex Bohn, he told her that the county had few resources for such a project, so she would have to do take it into her own hands.

“They can’t put much into (the) trail since the road is so bad and there isn’t funding for that,” Bohn told the Journal.

According to Santner, it has been a long, difficult process. “The biggest challenge has been implementation. Do we put it on both sides? One side? How will we fund it?”

Though funding has been a challenge, Santner has also seen support.

“We received a grant from the Monroe Tobin Family Fund, and a fund from the Humboldt Area Foundation,” she said.”We are grateful for Tom Mattson, [Humboldt County] director of public works for his support. Because of his support, the county received $11,000 in Measure Z funds to be allocated toward the pathway. The county has crushed rock to donate for the path and will begin this summer.”

Santner also experienced some negativity online, directed at her from local landowners worried that the path would infringe on their property. She assured them that the path will remain on the county easement on either side of the road.
Efforts are being taken to speed up the project.

“We want to kick-start making it safer for kids,” Bohn said.

“I feel kids deserve a safe and fun place to ride bikes or walk and should be able to access the store, resource center, medical clinic, community center and school,” Santner said. She has also started a GoFundMe page, where she has raised almost $3,000 of a $20,000 goal.

Editor's Note: Maple Wheeler is a sophomore at Mattole Triple Junction High School who joined us for several weeks as part of her school's annual Mentor Project program to learn more about a career in journalism. This is her first contribution to the Journal.