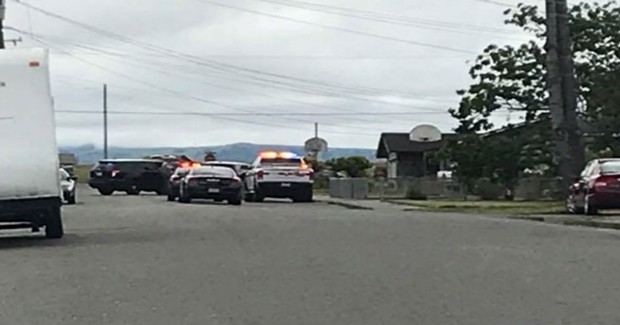 FIFTH UPDATE: According to a Fortuna Police Department release (see below), Eureka resident Melvin Matthews, 35, was wanted on felony warrants for evading law enforcement and making threats against a police officer, grand theft and possession of a stolen vehicle.

He surrendered to the Humboldt County SWAT team after a three-hour standoff.

FOURTH UPDATE: The Fortuna Police Department has notified the public via Facebook that the suspect is in custody and the scene is secure.

THIRD UPDATE: Officials are asking for people to avoid the area of Penn Avenue in Fortuna due a barricaded subject in a garage. The Fortuna Police Department has called in other agencies, including the Humboldt County Sheriff’s Office, for assistance and a medical team is standing by.

FIRST UPDATE: Fortuna Police tweeted, “Police activity on Penn Avenue. Please stay away until all clear is given.”
A medical team is standing by. They are located near but not in sight of the incident, according to the scanner.

PREVIOUSLY:
At approximately 1 p.m., Fortuna police surrounded a garage in the 1800 block of Penn Avenue. According to their crime page, they are dealing with a warrant suspect.

About 1:15 p.m., over a loudspeaker, they repeatedly asked people to surrender.
“Come out with your hands in the air or we’ll send the dog in after you,” one officer said.

Later, an officer told the emergency dispatcher, “I’ve made multiple attempts with the PA to get the subject to come out. He has failed to comply.”

Sgt. Charles Ellebrecht confirmed that officers were at the scene by telephone. He wouldn’t go into details about the situation. He did say, “We are calling in additional agencies to assist us.”

The Humboldt County Sheriff’s Office is reportedly at the scene as of 2 p.m.


Fortuna Police were able to take a wanted felon into custody Monday afternoon after a three hour stand-off. Melvin Matthews, 35, of Eureka surrendered to Humboldt County SWAT team officers after barricading himself inside a garage on the 1800 block of Penn Avenue for over three hours.

A citizen’s tip led Fortuna Officers to a vehicle that had been reported stolen on the 9th of June. The same subject is suspected of being the individual who evaded officers earlier that day by driving his vehicle the wrong way on Thelma Avenue, Ross Hill Road, Fortuna Boulevard, and Main Street.

Matthews was wanted on felony warrants for evading law enforcement and making threats against a police officer, grand theft and possession of a stolen vehicle.

Officers from Eureka Police Department’s K-9 unit, Cal Fire Law Enforcement, Humboldt County Sheriff, and the Humboldt County SWAT team arrived to assist the Fortuna Police Department because of reports that the barricaded individual might be armed.
Fortuna Officers notified neighborhood residents and advised them to either leave, or shelter in place. Penn street was cordoned off at both ends, until the scene was confirmed to be secured, for the protection of the public.

The scene was safely secured by SWAT officers around 4:30 pm.