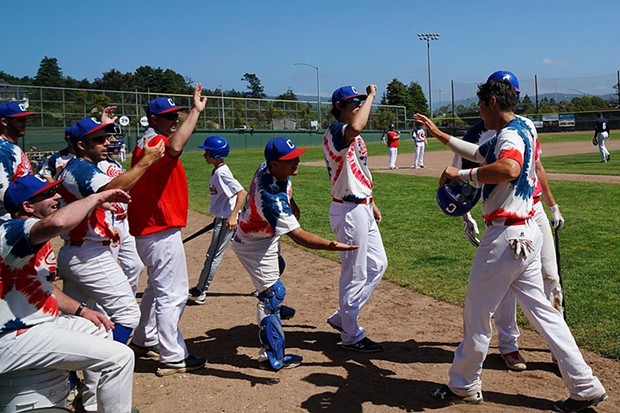 Friday, June 15
Alex Pham took the mound again, striking out 11 in six and two-thirds innings, while giving up six hits and tacking three runs onto his ERA. The Studs got on the board early, in the top of the second, after quickly loading the bases and using a well placed ground-out to their advantage.

Four innings of stranded baserunners and near-misses later, the Crabs got one of
theirs home. Connor Blair was walked, and McCarthy Tatum reached on a fielder’s
choice. After a cocksure two-out steal, Tatum was brought home by a booming
Jackson Kritch double. Tie ball game.

Sadly, though, the Studs refused to roll over and, with the help of some untimely
errors, took a two-run lead in the top of the seventh.

A leadoff single by Crab Otis Statum ignited the heretofore demure crowd and the resident hecklers started putting their diaphragms to good use. Things were looking up as Statum stole second and took third with ease on a wild pitch. Bronson Grubbs drove Statum home with a well-placed grounder and the stadium exploded like Krakatoa. But unlike the cataclysmic eruption, the Crabs-fan facsimile had no such lasting effect. Kellen Strahm grounded into a fielder’s choice and Koko Figueiredo drove one into shallow center and was tagged out on a questionable call at second base to end the inning.

Strong relief pitching from the Studs led them home and they won 3-2.

Saturday, June 16
In years past, the annual Oyster Fest Crabs game has been a bacchanalian affair bordering on riotous.

This year, however, it was surprisingly tame, with fewer than 500 people in attendance and only three fans getting the boot. Perhaps it was the allure of limited beer selection at the festival or perhaps this town’s first true marine love is the bivalve mollusk, but if you stayed on the plaza (or left before the top of the ninth was over) you missed what may have been the best game of the season thus far.

Debuting some extraordinarily sick tie-dye uniforms with nigh impossible-to-read names and numbers, our Dungeness dudes went down 2-0 in much the same way they had the night before. The 50-50s were not going our way this weekend folks (and I don’t mean the jackpots). Or so it would seem.

In the bottom of the second, the ever-clutch Jackson Kritch opened the inning with a double to center field. Connor Larsen reached on a dribbling grounder and a pitcher’s error on the throw to first. Catcher Jackson O’Boy walked in his
first plate appearance for the Crabs this year and just like that, the bases
were loaded with one out. Wesley Ghan-Gibson popped one into right field, but
it was caught and the runners had to hold. Outfielder Kellen Strahm, another
new face, got beaned and the Crabs were on the board. It was 2-1 Studs.

Two innings later, in the bottom of the fourth, the Crabs would tie it up. O’Boy
walked, but was caught stealing second for the second out (the trademark
aggressive baserunning of the Crabs has been backfiring this series) in the middle
of a patient and defensive at-bat by Ghan-Gibson. He, too, drew a walk.
Back-to-back singles by Strahm and Figueiredo drove home Ghan-Gibson.

Crabs starting pitcher Jared Milch found his form after the second inning and easily dispatched of the Studs in the third, fourth, and fifth innings. Reliever
Kenton Carruthers took over in the sixth and Seattle went three up, three down.
For their turn at the plate, the Crabs opted to load the bases and Blair brought
two of them home on a line drive single to right field. Crabs lead 4-2.

The seventh inning was more of the same. Carruthers sitting down three straight 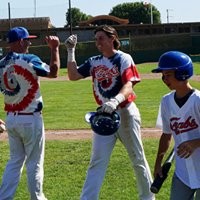 The Studs were looking more like geldings and the Crabs putting runs on the board. Kritch started off the inning with a thunderous triple, and he would stroll home on a Larson double. O’Boy singled to put Crabs on the corners and a saucy sacrifice bunt by Ghan-Gibson gave the Crabs a commanding 6-2 lead.

McCarthy Tatum took the mound in the eighth and, for the fourth straight inning, only three Seattle players saw an at-bat. The game was all but over and many in the stands opted to make last call at Oyster Fest. And then the ninth inning happened. Seattle had a walk, two singles, and two doubles to tie the game and earn their name again. An ineffectual half of the ninth for the Crabs and this game was going to extra innings!

In both the 10th and 11th innings, the Studs quickly put runners in scoring position. The Crabs, in turn, ratcheted up their defense and escaped both innings unscathed.

Bottom 11. Tatum burns a line-drive single to center field on the first pitch. Kritch
takes his stance in the batter’s box and does the exact same thing. Two men on, none out. The bleachers thrumming from hundreds of pounding feet. Santiago Cantu pinch hits, his first plate appearance of the day. It’s a sacrifice bunt, a little dribbler to the pitcher. Tatum is screaming towards third and with a bad throw to first he rounds for home and scores! Crabs win 7-6 on a walk-off error on a sacrifice bunt in the 11th inning.

Sunday, June 17
The final game of the series could not have been more different than Saturday’s extra-inning heartstopper. It was an hour and 52 minutes long. I’m not kidding. Far and away the shortest baseball game I’ve ever seen. Some 1,150 people packed themselves into the stands for the Father’s Day affair, more than the first two games combined.

Crabbies put their bats to the ball all game, just every time they did it went straight to a Studs defender.

As is tradition on Father’s Day, the game was replete with giveaways sponsored by
Pierson Building Center (and one from the North Coast Co-op). The 50-50 winner
took home a cool $1,074 and a $250 gift card to Pierson’s. A bright spot in the gloomy game.

An interesting note: The starting pitcher for the Crabs, Alex Trautner, is
ambidextrous. He can pitch both left and right-handed. Though on Sunday, he only threw righty as it’s his strong side. Rules state that Trautner can switch his throwing hand each new batter but must stick with his chosen side throughout the at-bat.

Upcoming games: Crabs head out on an extended road trip this week (the only weekend they’ll be gone all season), first to Healdsburg to play the Prune Packers — an early contender for best most ridiculous team name — and then down to San Luis Obispo for the weekend. They return Tuesday June 26 for a Battle of the
Safety Corridor against the B-52s.

Cheers to the Crabs Queens and their fuzzy pink regalia! Y’all looked stellar.

Cheers to Pierson’s for their continued largess.

Jeers to the Studs for wearing white on Sunday. On Sundays, we wear white. White on white makes for a ridiculous-looking field.

Cheers to the mini-conductor miming along at Sunday’s game. You did good, kid.

Jeers to yours truly (second week in a row!) for not being cranky and cynical enough to come up with more jeers. I’ll be in a worse mood next week. Promise.

A friendly reminder that if you hear a good heckle or have anything you want me to know, I can be reached at sports@northcoastjournal.com