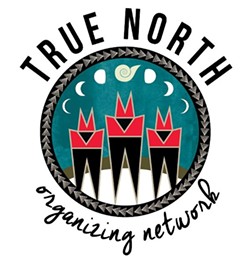 An Arcata woman has been granted the opportunity to post bail by a federal immigration judge after a seven-month detention in Bakersfield.

Claudia Portillo, a 33 year old who immigrated to the United States from El Salvador when she was 7, was taken into custody and transferred to the Mesa Verde ICE Processing Facility in November after she showed up for a “routine” immigration appointment in San Francisco, according to a press release from the  True North Organizing Network.

This morning, Judge Patrick O’Brien granted Portillo’s request to be released on $12,000 bond, though the Department of Homeland Security can appeal his ruling, which would delay Portillo’s release.

Portillo has four daughters, one of whom graduated from Arcata High School last week.

A community fundraiser held over the past week raised more than $8,000 and community groups are currently working to raise the rest of the money needed for Portillo’s bond with the hopes she will be able to return home this week.

See the full press relese from True North copied below.

18 June 2018 (San Francisco, California) — Claudia Portillo, an undocumented Arcata resident and mother to four daughters, has been granted release on a $12,000 bond after seven months of immigration detention, and her community is arranging to pay for her release. The North Coast community has advocated for Ms. Portillo’s release both at home in Humboldt and Del Norte counties and in San Francisco with community events, online fundraisers and direct support to her family.

At 6:00 AM on Monday, June 18th a convoy from Humboldt and Del Norte Counties embarked on a six-hour-long drive south to San Francisco Immigration Court demanded the return of their undocumented friend and neighbor, Ms. Portillo. After hearing her plea, Judge Patrick S. O’Brien granted her release on bond. He is one of only 334 immigration judges nationwide struggling to overcome an average backlog of 1,849 cases per judge. A 2017 article uncovered that only 15 percent of people in detention are represented by an attorney in San Francisco's immigration courts. Judge O’Brien stated in the hearing that while he was granting Ms. Portillo release on bond, the Department of Homeland Security has the ability to appeal his ruling to delay her release.

Ms. Portillo was unexpectedly detained during a routine check-in appointment in November 2017 and imprisoned her 555 miles away from her four daughters in the privately owned Mesa Verde ICE Processing Facility in Bakersfield, CA. Just 33 years old, Ms. Portillo was born in El Salvador, but has lived in the United States from age seven. Her four American daughters, four rescued dogs, mother, two sisters, nieces, and brother await her return to Arcata, CA, where she has lived for the past four years.

“My sister has been stuck in detention for seven months. She has missed her daughters’ birthdays and graduations.” Explained Ms. Portillo’s sister Jenny Ventura.

“Claudia is a strong, vital part of our community and is enduring something unthinkable for most of us… waiting in detention for more than 7 months! This is wrong! Claudia is not a criminal. She is a lovely human being who deserves better than this.” urged Mckinleyville, CA resident and True North Organizing Network Leader Lisa Enge.

Over the past week, a community fundraiser has raised more than $8,000 in online and in cash donations, and both individuals and community groups are arranging to cover the rest of the $12,000 cost of her release. Claudia may be home with her family this week.


Editor's note: This story has been updated from a previous version to correct Claudia Portillo's city of residence. The Journal regrets the error.