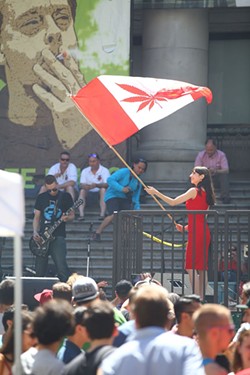 With a historic Senate vote today, Canada has legalized recreational marijuana use, becoming the world's largest nation to do so.

Today's vote means the legalization bill is headed to the governor-general, Queen Elizabeth's representative, for approval, which is widely considered a mere formality.

While Prime Minister Justin Trudeau's initial goal had been to have legal recreational sales ready to roll out July 1, that has proven overly optimistic and local governments will now need up to three months to prepare retail systems and regulations. Under the new law, the federal government will set some overarching rules but Canadian provinces will have a lot of discretion in determining whether the cannabis will be sold by government shops or private sector retailers, whether the minimum age for purchase will be 18 or 19, and how it is grown.

The New York Times has a full rundown on today's vote and what it means.