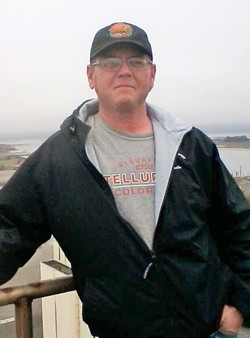 The ban stems from a 2014 criminal case in which Newman faced allegations that he’d habitually poached abalone and lied to a state agency about it and ultimately pleaded guilty to three misdemeanor charges, including unlawfully obtaining more than one license in a year, lying to a state agency and failing to properly tag abalone.

Newman was sentenced to three years probation in the case, a period during which he was prohibited from possessing or obtaining a recreational fishing or hunting license by special order of the court. But both Newman’s probation and the prohibition have since terminated, which prompted the California Department of Fish and Wildlife to file an accusation with the commission against Newman seeking a lifetime ban. In November, Newman successfully petitioned the court to have his convictions dismissed, essentially expunging them from his record.

Newman was arrested in June of 2013 after California Fish and Wildlife wardens searched his house and reported finding evidence that he’d poached abalone and a deer as part of what one prosecutor dubbed a “systemic” pattern of behavior stemming back at least a decade.

Abalone fishing is tightly regulated in California and the commission made the unprecedented decision in December to shut down the entire 2018 recreational season amid a rapid decline in the shellfish's numbers due to what scientists are calling a "perfect storm" of ecological conditions. (Check out our recent coverage of the current crisis in the fishery here.)

To legally harvest the mollusks during regular years, one is required to first acquire a permit, known as an abalone report card, which comes with 24 tags. When an abalone is harvested, state law requires that it must be immediately marked with one of the tags, limiting a person to no more than two dozen of them in a single season.

According to records in Newman’s case, he filed a sworn affidavit with Fish and Wildlife back in 2009 claiming he lost his report card after harvesting only three abalone. But when wardens searched his home, they found evidence that he’d harvested 21 before applying for the new replacement card. More troubling, a Fish and Wildlife investigation found Newman filed 11 affidavits with the state between 2003 and 2012 claiming to have lost his abalone report cards during the season, while no one else in the state sought replacement cards more than twice during the same period.

During the search, wardens also reported finding evidence that Newman submitted documents to the state in September of 2012 claiming to have lost his B-Zone deer tag before using it and requesting a replacement, when in fact he’d used the tag on a 4-point buck just eight days earlier.

Newman challenged the Fish and Wildlife accusation seeking to permanently revoke his recreational hunting and fishing privileges and the matter was referred to the Office of Administrative hearings and heard by an administrative law judge, who penned the proposed decision approved by the Fish and Game Commission today.

In the decision, Judge Ed Washington notes that Newman argued that the deer tag incident was a simple mistake, that he’d lost a X3B zone deer tag and meant to get a replacement but inadvertently received a replacement B-Zone tag instead. When he realized his mistake, he said he was too embarrassed to return the tag and admit it. When it comes to the abalone, Newman admitted he “was not fully aware” of some tagging requirements and improperly stored some untagged. But he argued that all those lost cards were really lost — left in friends’ trucks, washed out to sea or stolen. Additionally, according to the decision, he argued that since he’d already been punished by the criminal court, he shouldn’t be punished again by the commission.

Washington and the commission were unmoved.

“[Newman] is a commercial fisherman with approximately 20 years of experience,” the decision states. “He has obtained multiple duplicate sport fishing and hunting licenses during that period and should be well aware of the requirements for sport fishing, hunting and replacing lost fishing and hunting licenses and permits. Respondent’s explanations for his criminal activities were neither credible nor persuasive when considered with all the evidence presented at hearing. The evidence established that his criminal offenses were committed intentionally, knowingly or recklessly.”

Further, the decision states that the goal of the lifetime ban is not to punish Newman but to “protect the public and protect California’s at-risk fish and wildlife” and that Newman has demonstrated himself  incapable of responsibly exercising the privileges granted by hunting and fishing licenses.

Newman was elected to the harbor commission in 2011 and served a four-year term before opting not to seek re-election. A message left on his cell phone seeking comment for this story was not returned by deadline. Check back for additional information as it becomes available.