June 21, 2018
1 comment
They're small, they're furry and they're rarely seen. But is the Humboldt marten a candidate for the California Endangered Species Act? The California Department of Fish and Wildlife thinks so. According to a press release from the Environmental Protection Information Center, the CDFW recommended today 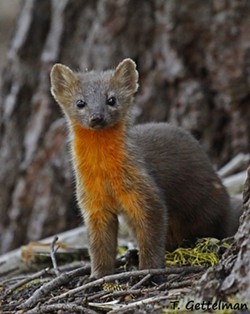 that the species come under additional protection.

The Humboldt marten, also known as the coastal marten, belongs to the mink and otter family. It lives primarily in old growth forests and was at one point thought to be extinct, until sighted in Six Rivers National Forest in 1996. In recent years it has been under increased threat due to use of rodenticides in illegal cannabis cultivation. EPIC, along with the Center for Biological Diversity,  brought a lawsuit against the U.S. Fish and Wildlife Service in 2017 that resulted in a federal judge overturning a previous decision by the agency to deny endangered species protection.

The California Fish and Game Commission will make a final determination on the state listing at a meeting Aug. 23, in Fortuna.

From the Environmental Protection and Information Center:

SACRAMENTO, Calif. — The California Department of Fish and Wildlife is recommending that the Humboldt marten, also known as the coastal marten, be listed as an endangered species under the California Endangered Species Act. This recommendation is in response to a listing petition filed in 2015 by the Environmental Protection Information Center (EPIC) and the Center for Biological Diversity. The California Fish and Game Commission will make a final decision on the marten’s listing at their August 23, 2018 meeting in Fortuna, California.

Relatives of minks and otters, Humboldt martens are found only in old-growth forest and dense coastal shrub in southern and central coastal Oregon and northern California. The cat-like animals were thought to be extinct until they were rediscovered on the Six Rivers National Forest in 1996.

Within California, Humboldt martens once occupied the coastal forests from Sonoma County north to the Oregon border. However, a history of habitat loss and trapping for their fur has reduced the marten’s current range to two small areas in Del Norte, Humboldt, and Siskiyou counties.

Scientists estimate that California’s population numbers less than 200 individuals. The Department found that the marten is endangered because of this very low population number combined with the threats posed by habitat loss from logging, urbanization, cannabis cultivation, elevated predation rates, exposure to toxicants and diseases, and climate change.

Martens are typically 2 feet long and have large, triangular ears and a long tail. They eat small mammals, berries and birds and are eaten by larger mammals and raptors.