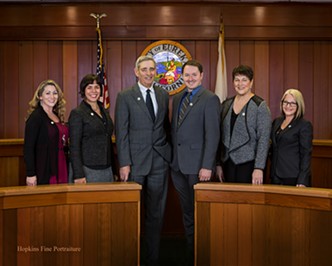 Eureka police officers will be getting a raise, two parcels near the Samoa Bridge are inching closer to development as an RV park, the Greater Eureka Chamber of Commerce is on the move and residents will  soon be paying a little bit more for garbage collection. These are just a handful of key items the Eureka City Council decided this week as a part of a packed agenda that could permanently change the fiscal and visual state of the city.

The council kicked off with a special meeting and discussion of staff recommendations for the city-owned property on C-to-F streets. Director of Development Services Rob Holmlund presented the results of three years worth of research and community input on possible changes to the waterfront. Public meetings on the future of the area, which stretches roughly three blocks and is currently a mixture of city and privately owned property, much of it unused, resulted in some common ideas about future use. People agreed that they would like to see building construction similar to the rest of Old Town, some mixed-use buildings that combine retail and commercial storefronts with stacked residential units, smaller parking lots and green open spaces.

“Many of the comments received invoked the feeling of a shared community space for events and public activities (e.g. watching fireworks on the 4th of July),” the staff report stated.

There was also considerable support for a waterfront hotel, in part to boost income for the city through its transient occupancy tax. Staff ultimately recommended an option that would allow for development of a hotel and restaurant on H Street, a piece of land that is currently privately owned by the Union Pacific Railroad Co. The company does not have any current plans to build a hotel but is interested in selling that tract of land, and the city’s development services division may play matchmaker to a potential buyer.

The vision for city owned property at C to F includes a small strip of parking, a dog park, playground and green space, as well as an area for retail development and a food truck. All of these recommendations are taking place in tandem with the upcoming revision of the city’s General Plan, due to go before the city council in September, with an overhaul of city zoning codes to follow. Holmlund says the C-to-F plan can move forward without any changes to the zoning code. Despite some pushback from Councilmember Marian Brady, who expressed uneasiness that the project is moving too quickly and about the (as yet undetermined) financial commitment, the council ultimately found consensus and agreed to allow city staff to move forward with its preferred option. According to the staff report, this option "would result in 387 jobs" and housing for 145 full-time residents.

Public comment at the regularly scheduled city council meeting was once again dominated by controversy over the Humboldt Area Center for Harm Reduction, with several local residents and business owners voicing their concerns that the needle exchange program has contributed to ongoing problems with homelessness and needle litter. Several people have called for the establishment of a “one-to-one” needle exchange, despite best practices guidelines from the California Department of Public Health that promote a needs-based approach. Councilmember Heidi Messner interjected her own comment once all the speakers had finished, tersely reminding them that several councilmembers have been working on getting a meeting with the state board of health for more than a month and plan to bring back recommendations on the subject.

Several items on the city’s consent calendar — including approval for the city to begin negotiations for the development of the Samoa Bridge Properties (the proposed RV park) and authorization of a $250,000 loan to Danco to develop an affordable senior housing project at Seventh Street and Myrtle Avenue — passed without discussion. Senior Personnel Analyst Will Folger did make a presentation on a pulled consent calendar item regarding a 5-percent base salary increase for Eureka Police Department sworn officer and communications dispatch positions. This raises would necessitate the freezing of four currently vacant positions over the next fiscal year, with the hopes that a raise will improve the ability to increase retention and recruit more officers. Folger called the current recruitment and retention problem a “crisis.” The council voted unanimously in favor of the pay increases.

A rate adjustment for solid waste collection through the current provider Recology Humboldt was also approved after a short back-and-forth between Councilmember Austin Allison and Director of Community Services Miles Slattery. The current rates were due to be revisited by the council in September and Allison asked if an adjustment could wait until them. Slattery replied that the current adjustment, a 1.82-percent increase in the amount charged for collection, was necessary for the city’s annual contract renewal with the company. The rate hike, which should cost city garbage customers an estimated extra 50 cents per month beginning July 1, passed unanimously.

The council also lavished praise on two action items geared toward stimulating tourism and economic growth, including termination of a lease between the city and the Greater Eureka Area Chamber of Commerce. The chamber constructed and maintained its current building at 2112 Broadway on a parcel of city-owned land with a 51-year lease. Donna Wright, the chamber’s executive director, explained that the entity was ready to go in an exciting new direction with a business incubator and new headquarters in Eureka’s Old Town. The chamber was looking to kick off these efforts with the help of $100,000 in compensation from the city after terminating the lease. Holmlund referred to the plan as a “win-win” for all involved, with the city having the option to either sell the building at around $460,000 or lease it to another business for around $3,000 a month. Support was unanimous, as was the vote in favor of adopting a memorandum of understanding for funding and construction of a Redwood Canopy Walk at the Sequoia Park Zoo. The MOU between the city, the Eureka Lodging Alliance and Humboldt Lodging Alliance included $1 million from the ELA and $500,000 from the HLA; a celebration of the funding was held earlier that day at the zoo. The canopy walk, scheduled to be finished in spring 2020, will allow visitors to walk 60 feet above the zoo in the redwood canopies.

The only item of the evening which drew some controversy among councilmembers was the recommendation to invite eight new potential cannabis retailers to submit Conditional Use Permit applications for various locations in the city. The proposed sites include currently vacant buildings and parcels on West Fourth Street, Broadway, Fifth Street, Fourth Street, Summer Street and 14th Street, meaning that if they were all approved, almost every major street through the city would have some kind of cannabis-related storefront. (Retailers are prohibited from using signage that has pot leaves or similarly provocative images.)

The city also has some built-in limits to curtail the growth of the industry, with the council only able to permit two retail facilities every six months. Holmlund said the new businesses are going into areas with chronic vacancy and improving under-developed lots, such as the former Humboldt Plastics company next to the current S.T.I.L. glass shop, which could become a large cannabis retail store. Public comment on the item, which fell toward the end of a meeting that stretched until 10 p.m., was largely favorable, with one man saying he had seen a boom in construction since the legalization of cannabis in Humboldt County.

Brady was the lone dissenting vote, expressing concerns about a “lack of consistency” with approving so many permit applications.