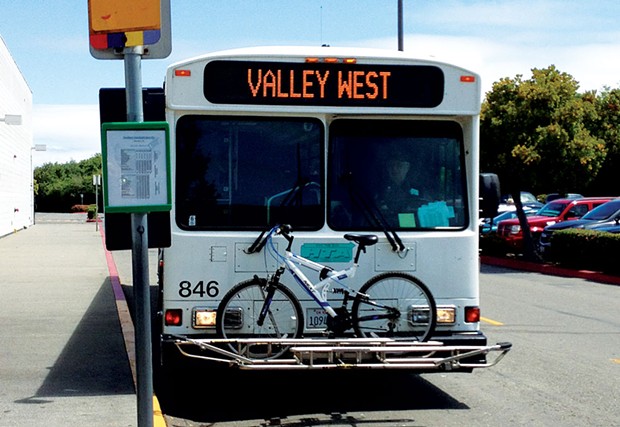 The Humboldt County Sheriff’s Office sent out a press release this week announcing it has revised its program assisting poor arrestees in getting home after they are released from custody to help them “have a better chance to create a healthy lifestyle upon release.”

State law has long required that jails offer transportation assistance, upon request, to any indigent person being released from custody more than 25 miles from where they were arrested. The sheriff’s office has arguably complied with that law but it has also refused Humboldt County grand jury suggestions to alter its policy by more proactively offering released inmates transportation assistance — which locally comes in the form of bus tickets — rather than just making it available upon request. (In a prior interview with the Journal, Sheriff’s Office Compliance Officer Duane Christian estimated that fewer than five inmates a month requested a bus ticket under the old policy.)

The new policy announced this week provides that, prior to being released, inmates will be proactively offered a bus ticket back if they were arrested anywhere outside the “greater Eureka area” — which apparently includes Cutten, Myrtletown and Humboldt Hill — and were booked into custody with “less than $5 and/or (do not) have means to purchase a bus ticket.”

The press release notes that during May, the first month of the program, jail staff provided more than 60 bus tickets. But based on the sheriff’s office’s press release, it seemed the new policy may still leave some inmates without a safe route back to the location of their arrest.

The Journal reached out to the sheriff’s office about this, asking how officials had come up with the $5 threshold and pointing out the $5.50 cost of a ticket to Southern Humboldt.

Sheriff’s office spokesperson Samantha Karges responded via email saying the $5 criteria only applies to people arrested within 25 miles of the jail but outside the “greater Eureka area,” and adding that the only bus fare pricier than $5 is the Southern Humboldt line.

“If someone needed to ride this bus line, that would mean that they had been arrested over 25 miles away,” she wrote. “The less than $5 criteria would not apply to them and that threshold would be assessed based on where they needed to be transported. … Of course, if rates do increase to the point where $5 is not sufficient to get a bus ticket, we will reassess that threshold and make changes accordingly.”

But that means someone without a dollar to his or her name arrested in Willow Creek and released from jail at 7:30 p.m. Saturday would have to wait some 36 hours — until Monday morning — to use a jail-issued bus pass.

There’s also the issue of cash, namely that some people booked into the Humboldt County jail come in with it in their pockets but leave with a check instead. Karges said if jail staff know someone booked into the facility is only going to be there a few hours — for, say, a book-and-release offense or sobering up after a drunk in public arrest — staff will return their cash to them when they exit. But for anyone who is held “more than a few hours, they would receive a check for the amount of cash” in their possession at the time they were booked.

Because local buses only accept cash payment or bus passes, that means a lot of people released from the jail need to find a bank or check-cashing business before being able to pay a bus fare. (Incidentally, there are check-cashing storefronts near the jail on Fourth and Fifth streets, which charge 3 percent to cash a check during business hours.)

Bus tickets issued by the jail won’t be paid for out of the county’s general fund. Instead, according to Karges, the tickets will be purchased with money out of the Inmate Welfare Fund, which is mandated by state law. These funds are set up by county jails and collect revenue from commissions from the vendors who provide inmate commissary and phone services, as well as a few other sources. State law provides that any revenue from providing these services — or contracting with a third-party to do so — have to go into an inmate welfare fund to be spent on programs to benefit inmates — including educational courses, drug and alcohol treatment, and maintaining a library — or to provide indigent inmates clothing and transportation upon their release from custody. The funds cannot be used to supplant general operating funds.

According to Karges, the jail generates more than $200,000 annually that goes into its Inmate Welfare Fund.

The jail’s policies surrounding transportation assistance and releasing inmates from custody in the late night and early morning hours have been the subject of much debate since the Jan. 1, 2014 murder of St. Bernard Catholic Church Pastor Eric Freed. The pastor was tortured and killed after Gary Bullock broke into his rectory just hours after being released from jail shortly after midnight following a public intoxication arrest 65 miles away in Redway.

One of the motives alleged by prosecutors during Bullock’s murder trial is that he’d broken into the rectory with the aim of stealing Freed’s car to drive home, which he ultimately did.

Despite calls from the Grand Jury to halt its practice of releasing inmates between 10 p.m. and 6 a.m. when public transportation isn’t running and few services are available, the sheriff’s office has continued the practice, saying it would violate inmates’ constitutional rights to arbitrarily postpone their release. It’s worth noting, however, that at least six other California county jails do just that and hold inmates until daylight, citing a lack of available transportation options.

Find the full press release from the sheriff’s office copied below, past coverage of the grand jury reports here and the office's late-night jail releases practices here.