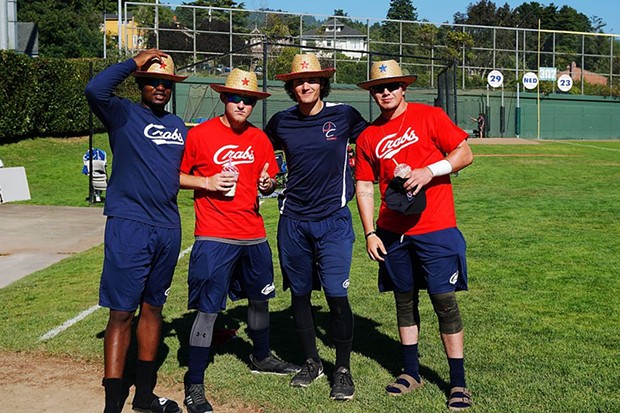 Over choruses of “O Canada” and riotous, bench-pouding cheers, the Crabs completed a sweep of the California Expos (née Montreal) Sunday afternoon. In the 10th inning, third baseman Wesley Ghan-Gibson punched a walk-off double over the Expos center fielder and sent the Expos on a quiet bus ride back to Central California (a cruel fate, indeed).

Two days earlier, I rushed down the stairs past dozens of folks patiently waiting in line as the first pitch was being thrown out. From the cheers I heard, it was a real heater. I was late (for no good reason) and desperately worried that my precious heckle section would be chock to the gills full of town criers. After all, it was the weekend before Independence Day and some folks gotta work, y’know. But as it turns out, 782 people fit quite comfortably into the Arcata Ball Park and my spectator friends are more responsible than I am.

From the start it was clear that the Expos were a sturdy defensive team, notching a double play against the second Crabs batter of the evening. They would also get on

the board first, a rare sight against our carapaced boys and their ace Alex Pham — who’s boasting a clean 1.63 ERA and 50 strikeouts on the season. This would be their only run of the night; Pham took it personally and proceeded to strike out 11 Expos en route to his fourth win of the season (he’s 4-1 in six starts).


Riled by the Expos’ unmitigated gall, the Crabs tied the game in the bottom of the third with back-to-back singles by catcher Jackson O’Boy (best name) and left fielder Kellen Strahm. Strahm advanced to second on the attempt to catch O’Boy at the plate. Center fielder Bronson Grubbs cracked an infield fly to the second baseman for the second out of the inning. Strahm stole third a couple pitches later and then, emboldened, attempted to steal home but was tagged out to end the inning.

The Expos tallied another double play in the bottom of the fourth, marking the
first time I’ve seen the Crabs get doubled-up multiple times in a game. But Pham was fanning the Expos all night, and they struggled to get a runner past first base all night long.

Bottom of the fifth saw the gruesome twosome of the night, O’Boy and Strahm, rear its head once again. After two quick outs and his back against the wall by way of a 2-2 count, O’Boy roped a line-drive double to center field. Strahm wasted no
time before tripling to deep center field — a bad read allowing the third base
(PLAY IT OFF THE WALL!). Sadly, Strahm was left stranded after Grubbs popped out to end the inning. It was 2-1 Crabs.

Any longtime fan knows Crabs games don’t really start until around the fifth
inning. Just as the Warriors are a third-quarter team, our Crabbies love them a
sixth and seventh inning. Friday night was no exception. The Expos brought in a
new pitcher who promptly beaned lead-off Crab Connor Blair. A single and an

error later, and Blair was back in the dugout hugging a 3-1 lead with nobody out and two men on. Due to the laws of Parallel Structure and Conservation of
Greatness, O’Boy and Strahm had no choice but to pop out (these Crabs are in perfect lockstep) for the first two outs of the inning. Grubbs stepped in to the batter’s box and singled to bring home Larsen and Ghan-Gibson. Then it was 5-1 Crabs

Ambidextrous pitcher (still throwing righty) Alex Trautner took the mound and put the Expos away one, two, three in the top of the eighth. Crabs tacked on a sixth and final run in their half of the inning through an error and a Ghan-Gibson double. Trautner would put away the side ninth and the Crabs got to go home early. Final score, 6-1 Crabs.

However stalwart their infield was, the Expos would be hamstrung all weekend by ineffectual pitching and some poor reads in the outfield, and unable to keep up with the Crabs pressing baserunning and and booming bats.

It was a strange game on Cowboy Night. A 10-3 rout of the Expos that may as well have been played in the Upside-Down. The Expos starter walked the bases loaded in the first, McCarthy Tatum got lost in the middle of a two-run Jackson Kritch single and was tagged out on what should have been a perfunctory jaunt to second base, and an unnamed crustacean caught a bad cleat on his way to first base and just fell down.

There was, however, one play in the second inning that left me awestruck — not only at the rarity but also at the poetic nature of it. A perfect synecdoche.

As I mentioned above, the Crabs scored two runs in the first inning. Getting on the board early fires the crowd up. The band kicks into gear, calling for freeway balls, lauding the Bat Boy, deriding worm-killing pitchers with the Batman theme. The Expos, in their second at-bat, easily put a runner on third and nearly brought him home — though we escaped unscathed.

Otis Statum Jr. took the plate, leading off the bottom of the second. At 6 feet, 3 inches and 215 pounds, he’s an imposing figure in the box, with an easy, upright stance reminiscent of slugger Ken Griffey, Jr. He was one of the top outfield recruits in the country and was drafted by the Cincinnati Reds back in 2016, but chose to remain at the University of Reno, Nevada, to further hone his skills. Still recovering from shoulder surgery earlier this year, his hitting has been, frankly, subpar (though he's an exceptional defensive player). Regardless of injury, Statum makes no excuses for himself at the plate. He expects to drill one every time and he’s patient — drawing far more walks than one would expect from a guy with such a large strike zone. Opposing pitchers throw around him, they give him their best junk, hesitant to throw a fastball down the middle. And for good reason.

He watched one ball trundle by, barely taking the bat off his shoulder. The next pitch was something he liked and he gave it a ride. Statum sent a shot way out into right field, the Expos right fielder backpedaling at full speed all the way into the warning track before turning around. It bounced inches away from the top of the wall (which would have relegated him to a ground-rule double) but Statum was having none of that. He tore out of the batter’s box, rounding first before the ball contacted the wall and never stopped. The ball caromed off the wall past the right fielder (seriously, play it off the wall, man) and toward the foul line. Statum was rounding third, being waved home by the first base coach, before the Expos even got to the ball. To his credit, though, the Expos' right fielder has one hell of an arm and yanked one to the second cut-off man, who gave a great throw to the Expos catcher. But it was too late. Despite an incredible tag attempt, Statum contorted his body and planted his hand at home plate.

It’s easier to hit a home run than a triple. It is almost impossible, especially in Arcata where the deepest part of the outfield is just under 400 feet, to hit a Little League (inside-the-park) home run. But Statum did it.

I spoke with board members Tracy Mack and Larry Zerlang, neither of whom can remember the last time someone clocked a little league home run, though both swear it’s happened before. I’ve never seen one live, I’m still not 100 percent sure I did. It was truly surreal. Way to go, Ocho!

Sunday’s matinee game was also First Responders Day and the crowd was treated to a Coast Guard Flyover. The Humboldt Highlanders, a bagpipe troupe, played

“Amazing Grace” and there was a moment of silence for fallen first responders. It was a beautiful moment.

Opting to play two games in a row, the Crab Grass Band returned less than 24 hours after their last performance in the withering 70-degree heat on a cloudless Sunday that did irreparable damage to my epidermis and my vocal chords.

The Expos had enough of Crabs bats and hecklers and put on a defensive show, sending the game to extra innings and holding the Crabs to a nigh-unheard of three runs. Wesley Ghan-Gibson went 3-4 and drove in the winning run on a high-flying double to center field, but it was undeniably a slow-marching affair. A parade of singles and walks can take the air out of a crowd, but not our hometown hecklers and cheer squad, who stayed vocal and (appropriately) rowdy throughout and helped carry the Crabs to their narrow victory.

The Crabs pitched by committee, sending eight different hurlers out to the mound, only one of whom saw more than two innings (starter Andrew Najeeb-Bush, who struck out a game-high three batters).

Our hometown heroes are now humming along at 16-6 and have won six in a row.

Upcoming Games
Crabs look to keep the streak alive in their July 3, 4 series against the Solano Mudcats, this Tuesday and Wednesday (Wednesday’s game is at 2:30, folks!)

Cheers and Jeers
Cheers to Tracy Mack for all her knowledge and time. Thank you for talking to me whenever I pester you.

Jeers to the guy who ralphed in the bathroom on Friday. Find a toilet, dude.

Cheers to the gentleman in the Hawaiian and his tan-shirted friend at the game on Sunday for boogie-ing down harder than I’ve ever seen. Y’all got some serious moves.

Jeers to the woman who left her purse full or syringes and suspicious baggies at the game on Friday. No words.

Jeers to the woman sitting in the heckle section on Sunday who shushed folks. Boooo! Know where you're sitting.

Heckle of the Series
(It’s a long one) To an Expos pitcher who had trouble finding the plate: “Hey pitch! Have you ever heard of the book Where the Wild Things Are? The answer is: PITCHING IN ARCATA!” (Extra points for creativity and not passing out while shouting for that long.)