Protesters Say 'Enough is Enough' at Families Belong Together Rally 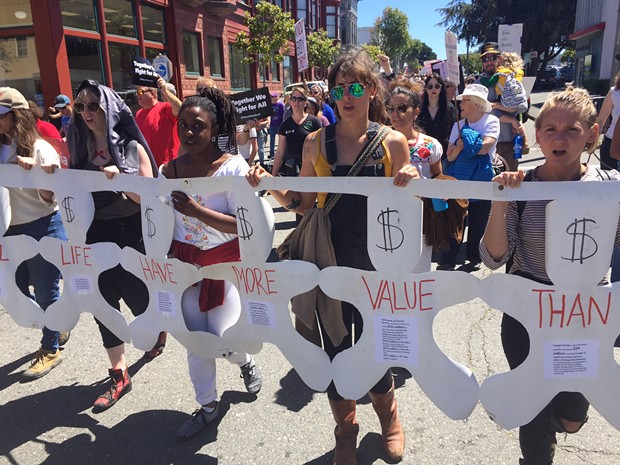 A diverse crowd of protesters stretching some three city blocks made their way through the streets of Old Town Eureka this morning, peacefully decrying the Trump administration’s “zero tolerance” policy at the border and demanding the reunification of separated families.

As they wound along the route, marchers held aloft handmade signs, some reading “In our America Love is Love,” “Where are all the babies and children?” and "Together we fight for all,” amid the chants of “I.C.E, I.C.E, go away. Caging children is not OK.” and “Hey, hey. Ho, ho. I. C. E. has got to go.”

Similar Families Belong Together protests took place across the country today, with more than 700 planned from coast to coast. Local organizers put early  estimates of the turnout in Eureka near 3,000. 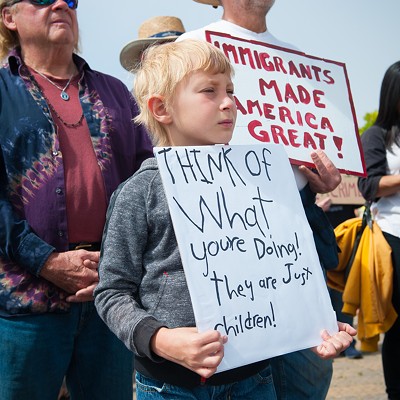 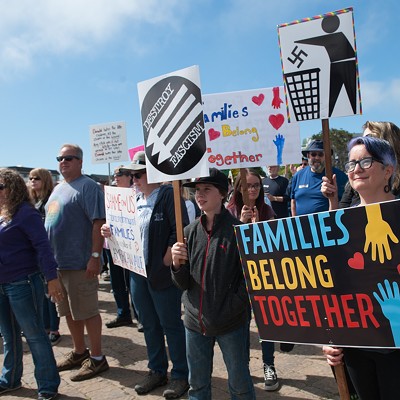 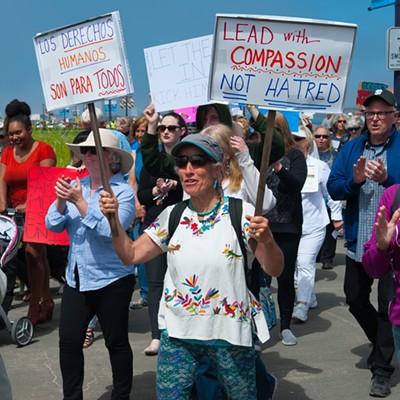 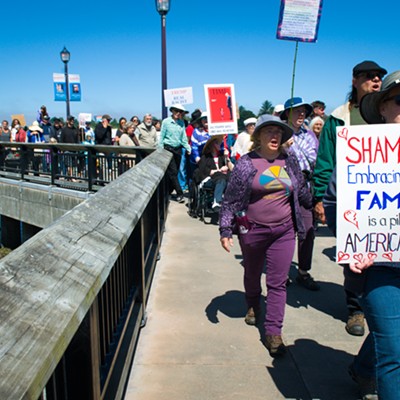 Families Belong Together Rally
By Kimberly Wear
Click to View 8 slides
Among those was Linda Anderson, wearing a khaki jacket with the words “I Really Do Care” written on the back, an obvious reference to Melania Trump’s controversial choice to wear one sporting “I REALLY DON’T CARE, DO U?” on a visit to children being held at a Texas detention center.

Anderson was walking along with her colleague Betty Macchi. The women said, as early childhood educators, they were brought out to the march by their compassion for the children who were suffering untold trauma by being separated from their parents.

“This is damage that is not easily undone,” Anderson said.

“There are long-lasting consequences,” Macchi said in agreement. “We can’t allow this to continue. It must stop now.”

A trio of counter protesters with signs reading "No Illegals," and "Stop Separations. Go Home," had a brief, but terse exchange with a few of the marchers at end of the route as police and rally volunteers wearing lime green vests stood in between them.

The gathering began in the Madaket Plaza on the foot of C Street with a Native American prayer before several speakers took to the podium, urging action and calling on local government officials to make Humboldt County a sanctuary county.

Renee Saucedo of Centro Del Pueblo Humboldt County reminded the crowd that the United States has a long, dark history of stripping children from their families, and asked why those lessons of the past have still not been learned.

“We are outraged,” she said. “We will not allow this continue.”

Paola Gonzalez, who left her native Colombia with her mother and brother when she was 8 years old, described the fear and hardship of making her way through the immigration process after the family first stopped in Puerto Rico.

Describing herself as a mother, an immigrant and a warrior, Gonzalez said she remembers the immense fear she felt during the immigration interviews — the fear of deportation, the fear of being separated from her mother, the pressure to smile just right.

“It was terrifying,” she said.

In seeing the women now being separated from their children at the border, Gonzalez says she sees her mother, her aunts and herself.

“And I say enough,” she said. “Enough of the false smiles. Enough of the fear. Enough. This is the moment to unite, to resist and to take action.”


Editor’s Note: Read more about the Families Belong Together march is this week’s upcoming edition of the North Coast Journal.