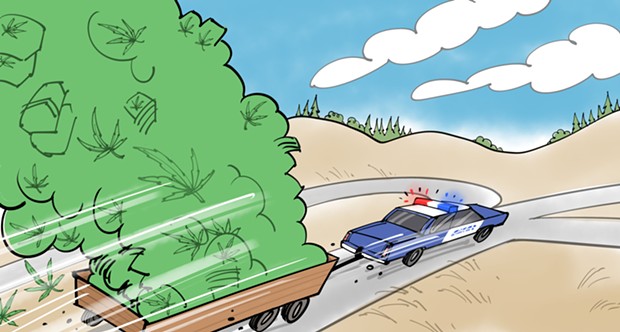 Documentation for the destruction of about 800 pounds of marijuana seized by Rohnert Park public safety officers in recent years is missing from court files, KQED has found, despite the officers writing in police reports that the court ordered the evidence destroyed. 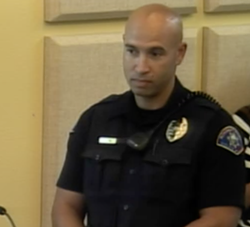 The incident reports show that Tatum and his partners were responsible for seizing hundreds of pounds of marijuana during the traffic stops. The city awarded Tatum for this work in 2015. Police and court records indicate he was given a wide latitude to conduct drug and cash seizures with little oversight.

For example, on Halloween in 2016, Tatum and Huffaker made a standard stop, pulling over a man from Woodland Hills for not having his headlights on in the rain. Huffaker wrote in the report that he smelled marijuana and then searched the vehicle.


A 10-pound sample was booked into evidence, Huffaker wrote, and he drafted a destruction order for the remaining 90 pounds.

Destruction orders are supposed to be filed with Sonoma County Superior Court, according to Rohnert Park Property Unit Supervisor Christine Giordano. State law requires that law enforcement file an affidavit with the court within 30 days of destruction.

Schwartz, the assistant city manager, wouldn’t clarify the destruction procedures of the Rohnert Park Department of Public Safety or explain what happened to the approximately 800 pounds of seized cannabis that was purportedly destroyed but not documented.

Schwartz said he couldn’t comment on the missing destruction orders because they could relate to an ongoing internal investigation into Tatum and Huffaker, which the city launched around April of this year.

Justin Buffington, an attorney who represents Tatum and Huffaker, did not respond to multiple requests for comment on this story.

Attorney Joe Russoniello, who used to be an FBI agent and U.S. attorney for the Northern District of California, said it is the responsibility of the police department’s hierarchy to make sure that there is legitimate oversight.

Tatum has a history of tension with Rohnert Park Department of Public Safety Chief Brian Masterson, court records show. He successfully fought attempted discipline in 2009 for failing to register an assault rifle with the state Department of Justice.

Tatum then sued the chief alleging racial discrimination in 2012. Tatum is African-American.

The lawsuit alleged Tatum was unfairly passed over to become a training officer. It cites responses from supervisors who questioned his judgment and “willingness to set the best example” after Tatum sent an email to the entire Department of Public Safety and City Council with some thoughts on police tactics.

“Use every tool you have, we don’t play fair….We play to win!!” the email says in part. “When I became a police officer I promised to be honest and protect not only the public, who hates us most of the time until they need us, but to protect the other officers out there protecting society.”

Tatum was promoted to sergeant in 2015.

In some cases, Rohnert Park Public Safety officers did file destruction orders with the court. But those, too, raise questions about internal oversight of Tatum and the department’s drug interdiction work.

The department gave Tatum the responsibility for seizing and destroying large amounts of marijuana. In 2016 and 2017, about 720 pounds of marijuana was released to Tatum for disposal, according to destruction orders filed with the court.

Tatum and Huffaker are currently under investigation by Rohnert Park for their involvement in a suspicious marijuana seizure on Dec. 5, 2017. But the city had notice of at least one other questionable marijuana seizure by the two a year earlier.

The officers seized 47 pounds of medical cannabis from Huedell Freeman during a traffic stop on Dec. 29, 2016.

Freeman’s lawyer, Hannah Nelson, followed up with the department a few days later by phone and email asking that the cannabis, worth a year of income to Freeman, be returned to him as soon as possible.

“Officer Huffaker informed me [in a phone call] that he had all but 10 pounds of the medicine destroyed,” Nelson wrote in a follow-up email to the department on Jan. 5, 2017. “He also informed me that I would have to wait to receive discovery to obtain the details of his reasoning or justification. He additionally stated that I would have to subpoena the destruction order and department policies concerning confiscation and destruction of medical cannabis when I asked for both.”

The Property Unit Supervisor should ensure that marijuana, drug paraphernalia or other related property seized from a person engaged or assisting in the use of medical marijuana is not destroyed pending any charges and without a court order. Upon the prosecutor’s decision to forgo prosecution, or the dismissal of charges or an acquittal, the Property Unit Supervisor should, as soon as practicable, return to the person from whom it was seized any usable medical marijuana, plants, drug paraphernalia or other related property.

That protocol was not followed in Freeman's case. His marijuana was not returned. The court has no record of a destruction order. No charges were ever filed.

Freeman filed a claim with the city last year for the value of his seized property, but his claim was denied. Now, more than a year and a half after the traffic stop, Nelson said she still doesn’t know if Freeman’s cannabis was actually destroyed or not.

Correction: KQED learned after publication that Rohnert Park police requested prosecutors file charges against Huedell Freeman. This post has been edited to reflect the new information.

This story was reported in collaboration with the North Coast Journal and Humboldt County blogger Kym Kemp.