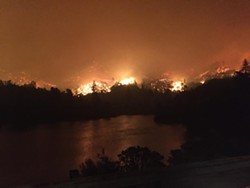 The Carr Fire continues to rage in Shasta County and has forced widespread evacuations in Redding.

The fire, sparked July 23 by the mechanical failure of a vehicle near State Route 299 and Carr Powerhouse Road in Whiskeytown, now spans more than 44,000 acres and is only 3 percent contained. It has killed two people — a firefighter and a private bulldozer operator — destroyed 15 structures and damaged five more. Almost 500 structures are currently threatened, according to CalFire’s most recent update, which warns that these numbers are changing fast and will continue to be updated.

As nearly 2,000 fire personnel continue to battle the blaze and evacuate numerous Redding neighborhoods, State Route 299 remains closed in both directions at the Trinity-Shasta county line. The North Coast Unified Air Quality Management District issued a public service announcement yesterday warning that weather conditions today will cause smoke to pool along river drainages in the north-eastern parts of Del Norte, Humboldt and Trinity counties. On the coast, the district expects air quality to remain “good” to “moderate,” with periods classified as “unhealthy for sensitive groups.”

To keep up with the latest air quality warnings, check here. And updates from CalFire on the status of the Carr Fire — including a list of mandatory evacuation orders in the Redding area — can be found here. Fine the latest on highway closures here. Local reporter Kym Kemp has also been posting regular updates on her site.