Mendo Complex Gets Containment Date, but no Estimate for Carr Fire 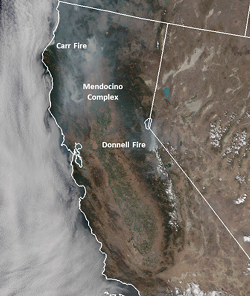 While a string of fires continue to burn to the north, south and east of Humboldt County, air quality is expected to be in the good to moderate stage although some inland areas, such as Garberville, will have “widespread haze,” according to the North Coast Unified Air Quality Management District.

Fire officials are now giving an estimated containment date of Sept. 1 for the Mendocino Complex — the merging of the Ranch and River fires, which currently stands as the largest in California history. The blaze has burned more than 300,000 acres and destroyed 119 homes with another 9,200 structures threatened, according to Calfire.

The cause remains under investigation.

To the east, the deadly Carr Fire, which has claimed at least eight lives, burned more than 180,000 acres and destroyed 1,077 homes, has no estimated date for full containment.

According to Calfire, a red flag warning stands until 11 p.m. on Saturday for areas of the fire, which is burning “mostly in steep drainages, driven by variable winds” while “heavy timber and steep terrain continue to complicate firefighting efforts.”

“Firefighters continue to build and improve containments lines in more active portions of the fire, while mop-up and patrol efforts continue thorough the less active areas,” a morning Calfire update on the Carr Fire states.

For the most up-to-date fire information, including evacuations and road closures, visit http://www.fire.ca.gov/current_incidents.

A bipartisan congressional delegation sent a letter Tuesday urging President Donald Trump to declare a major disaster in Mendocino, Lake and Napa counties to open up federal funding for firefighting and recovery efforts.

Last night, Congressman Mike Thompson, who signed the letter along with North Coast Rep. Jared Huffman and two dozen others, appeared on CNN’s AC360 with Anderson Cooper to advocate for the president to take action.
Trump set off a firestorm of his own making earlier this week when he tweeted out that California’s environmental policies were impeding the use of “massive amounts of readily available water” to battle the state’s blazes, comments that were soundly denounced by scientists, fire officials and elected representatives, including Huffman, who referred to him as "President Sh**-For-Brains."

“Outside of these hours, the highway will remain closed at Trinity Dam Blvd. and J.F. Kennedy Memorial Drive to both through traffic and repopulated areas. Motorists should expect significant delays.”

State routes 36 and 3 were offered as alternatives, but Caltrans District 1 notes that construction delays on SR36 west of Dinsmore resume on Monday with the following weekly closures scheduled: Monday to Thursday: 8 am to noon and 1 p.m. to 5 p.m., and Friday: 8 a.m. to noon and 1 p.m. to 3 p.m.

“Motorists can expect up to 30-minute delays outside these times,” the post states.