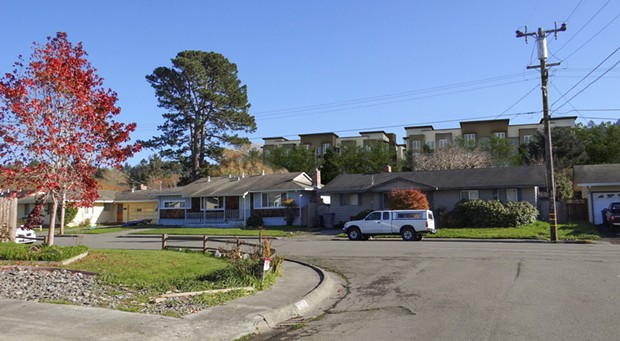 The Arcata City Council, meeting this morning with Councilmember Michael Winkler absent, having recused himself from the issue, deadlocked on The Village, a controversial off-campus student housing project, leaving the development’s future uncertain.

The council voted 2-2, with Councilmember Paul Pitino and Mayor Sofia Pereira dissenting, on a motion from Councilmember Susan Ornelas that would have approved the project in principle while requiring Humboldt State University and the developer to modify their proposal to include family housing in the project, which as proposed would house 600 students. Earlier in the meeting, an HSU administrator told the council that including family housing in the development isn’t viable due to liability concerns and a lack of demand.

After Ornelas’ motion failed for lack of a third vote, Pitino moved to approve the project as proposed. But Ornelas abstained from the vote in “protest” of what she deemed a lack of willingness from the developer and HSU to think creatively and to compromise. Councilmember Brett Watson also abstained without explanation, halting the motion.

With the council having failed to come to a consensus, the project appears stalled and it’s unclear under what circumstances it could be brought back for further consideration.

The proposed 600-bed facility is supported by Humboldt State University but has drawn opposition from local residents, who have voiced concerns about noise, traffic and other neighborhood impacts from placing hundreds of 18 to 22 year olds on the 10-acre Craftsman’s Mall site, which abuts a residential neighborhood and sits across the bridge from LK Wood Boulevard.

Developers downsized their proposal for the property, agreeing to limit it to a total of 152 units spread through two three-story buildings and three two-story buildings on the site.

The project was slated to come before the council at its regularly scheduled Aug. 15 meeting but an unrelated protest disrupted the proceedings, as well as another meeting the following night, prompting the council to schedule this morning’s special session.

In an apparent effort to head off a repeat, there was a strong police presence in city hall today with two officers stationed at the front door, two more at the end of the aisles in the council chambers and another at the hallway leading to the offices of the city manager and councilmembers.

Early in today’s meeting, Ornelas and Watson indicated they’d sent HSU and the developer, AMCAL, a list of conditions that would garner their support for the project. These conditions included incorporating a grocery store or market into the development’s plans and designating a portion of the project up to house community members and students with families. While AMCAL indicated it was supportive of incorporating a market into its plans, HSU said opening the development to families or community members wasn’t feasible, citing both liability concerns and a lack of campus demand for housing to accommodate students with families.

David Moon, representing AMCAL, told the council that incorporating community input had resulted in a better project proposal and urged the council to move it forward and to consider that HSU has the “worst” off-campus housing market in the entire California State University system.

Moon’s comments drew grumbles from the crowd and was referenced by several subsequent speakers during public comment. Steve Martin, who said he’s in his 27th year as a professor at HSU, among them.

“The only words that come to mind are ones I can’t say in polite company,” he said. “A no vote on this isn’t anti-HSU or anti-student, it’s anti-poor planning.”

Speakers were generally split on the issue, with roughly half urging the council to move the project forward in order to provide relief in the face of a student housing crisis and the rest voicing concerns about traffic, neighborhood impacts, the possibility that the project would skirt prevailing wage requirements and ultimately take a valuable property off the city’s tax rolls, should HSU take it over in the future.

When the issue came back to the council for further discussion, the divisions were immediately clear. Watson said he’s heard a lot of concerns from the adjacent Westwood neighborhood — concerns that he said welcoming a more mixed-demographic of students and nonstudents into the housing project would largely alleviate. While infill development to fill student housing needs is important, Watson voiced concerns about throwing “neighborhoods like that under the bus.”

Ornelas then made her motion to approve the project in principle with a host of conditions, including reconfiguring the site plans so the building’s courtyards “would see some sun” and limiting The Village’s student population to 350 people, which would leave space for 250 beds of either student families or community housing.

Before the motion came to a vote, Pereira indicated she would vote against it.

“We have a project that’s in front of us and I think it’s our responsibility to make a decision on it — our community has come to so many meetings,” she said, adding that there had already been some compromise on the proposal and it was unfair for the council to keep re-visioning it. “The applicant and HSU have stated their opinions. I think we owe it to the public to make a decision.”

After Ornelas’ motion failed, with Pitino and Pereira dissenting, Pitino made a motion to approve staff’s recommendation, which would have pushed the project forward. Watson then asked a representative from HSU if it was the university’s “final position” that it was unwilling to incorporate family housing into the plans and he indicated it was.

Then, Ornelas announced she would abstain from the vote in protest.

“I believe we can have a project,” she said. “I believe it’s in HSU’s court right now. I believe that if HSU wants housing, HSU could have housing. I’m asking HSU … to please be creative about this. This doesn’t have to be the end. … I can’t take responsibility for causing damage to those neighborhoods.”

She said she’d checked with the city attorney and it was “legal” to abstain from the vote. Pitino then asked for a clarification about why she was abstaining, to which Ornelas repeated that she’d gotten word from the city attorney that it was legal.

“Of course it’s legal,” Pitino responded. “The logic escapes me, but that’s your logic.”

Pitino said, in his mind, the council had a project before it that represented years of work — and some compromise to mitigate community concerns — from the developer. He said he supported it.

When the final vote came, Pitino and Pereira supported the motion but Watson joined Ornelas in abstaining from the vote, killing the motion and potentially The Village.

In a statement released by the university after the meeting, Frank Whitlatch, associate vice president for Marketing & Communications, called the council vote “disappointing.”

“We believe the Village Project would have provided the safe and affordable housing that our students need,” the statement reads. “We worked closely with the developer and with the City to make changes and improvements to this project, and it had the potential to both serve students and meet the needs of neighbors and the city as a whole.”

Whitlatch added that, looking ahead, the university will “need to be creative and pursue a variety of other options.”

“Our priority is our students, and they face a serious challenge finding suitable housing,” he states. “This is impacting their educational experience and having a negative effect on our overall enrollment.”

We’ve reached out to Arcata Community Development Director David Loya to inquire about where the project goes from here. We’ll update this post if we hear back from him.

Editor’s note: This post was updated from a previous version with additional information.