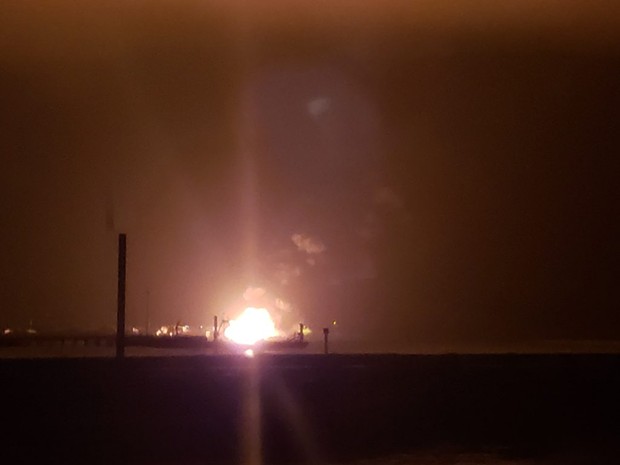 Humboldt Bay Fire is reporting that the Fields Landing fire has been fully extinguished after 16 hours. There were no injures but the damage to equipment — including 250 crab pots —the warehouse and the dock is estimated at $750,000.

PREVIOUSLY:
Humboldt Bay Fire responded to a large structure fire at the Olsen Dock in Fields Landing last night and had to call in a fireboat to help battle the blaze, which spread from a large warehouse structure to the dock itself.

The effort to control the blaze continued this morning, when crews were expected to take advantage of low tide to try to extinguish the fire on the underside of the dock.

The fire is considered “suspicious and human caused,” according to a Humboldt Bay Fire press release.

No injuries were reported and Humboldt Bay Fire says it will release more information as it becomes available.

See the full press releases from Humboldt Bay Fire below:


The structure fire and associated dock fire in Fields Landing have been fully extinguished. Crews used the fireboat from Humboldt Bay Harbor District and hand lines to extinguish the remaining hot spots. The fire took 16 hours to extinguish.
There are approximately 250 crab pots that were damaged by the fire as well as the loss of the building. Approximate loss is $750,000.
There are no injuries from this fire.
The fire is suspected to be human caused as there was no electrical service to the building
Anyone having information as to the cause is asked to contact Humboldt Bay Fire at 707-441-4000.


On 08/28/18 at 9:57 PM. Humboldt Bay Fire responded to a Structure Fire at the Olsen Dock in Fields Landing.
Humboldt Bay Fire responded with 3 engines, 1 truck and 1 chief officer. The first engine arrived on scene and found a large warehouse structure with heavy fire visible and other structures threatened. Mutual aid resources including an engine from Loleta and the fireboat from Humboldt Bay Harbor District were requested. The fire was deemed a defensive attack with the heavy fire involvement and the structural instability present as well as an abundance of (crab) pots and rope. Units used master streams, elevated streams and the fireboat to control the fire in top of the dock. Portions of the dock failed allowing the fire to burn under the dock. Crews were unable to access this fire due to the unstable concrete above and the high tide. Low tide is at 8:00 and the fire boat will be used to attack the underside of the dock. Fire crews are still on scene monitoring the fire and will remain until the fire is extinguished.
More information will follow as it becomes available.
There were no civilian or firefighter injuries. The fire is considered to be suspicious and human caused.
Humboldt Bay Fire would like to thank the following agencies for their assistance:
Arcata Fire District, Loleta Fire District, Samoa Peninsula Fire District, Fortuna Fire, Humboldt Bay Harbor District, PG&E and City Ambulance.
Humboldt Bay Fire would like to remind the drivers not to drive over fire hose as it can fail catastrophically cutting off water supply to firefighters.