Flatmo's Dragon Slays at the Smithsonian 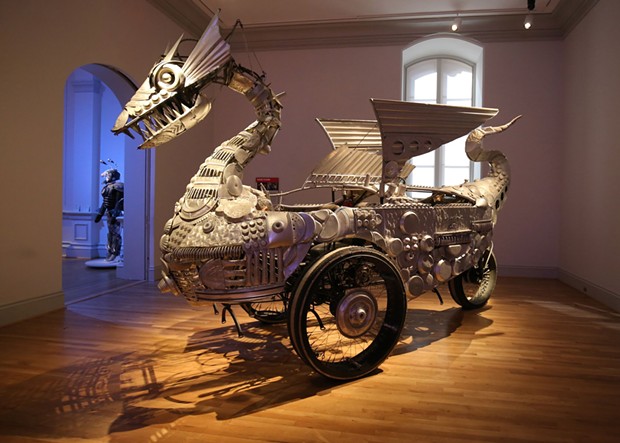 Editor's note: With Black Rock City once again rising up amid the great sandscape of Nevada’s desert expanse, we thought now would be a good time to take another look at the fantastical work of Humboldt County’s own Duane Flatmo, whose dragon creation is part of the Smithsonian’s No Spectators: The Art of Burning Man exhibit on the annual gathering.

The title is inspired by a longstanding “no spectators” saying at the event, according to curator Nora Atkinson, who organized the exhibit in collaboration with the nonprofit that puts on Burning Man, in an article on the Smithsonian website.

"It’s all about being there, being fully present, and not just observing,” Atkinson says in the article. “Two of the 10 principles of Burning Man are radical participation and radical inclusivity, meaning that there are no outsiders. Everyone is part of the experience.”

The reign of Flatmo’s dragon in the Renwick Gallery, located just steps from the White House, is drawing to end Sept. 16 but below you'll find a look back at arts and features editor Jennifer Fumiko Cahill’s coverage when the artist and Burning Man aficionado was readying for the show in November of 2017.

How do you pack a giant, flaming scrap-metal monster on wheels? Artist and Burning Man regular Duane Flatmo has done it plenty of times with his iconic fire-spouting octopus "El Pulpo Mecanico." But now he's shipping the fiery dragon he built in 2009 to the Smithsonian in Washington, D.C.

The museum will display the gleaming beastie along with work by other artists in its March 2018 exhibition No Spectators: The Art of Burning Man. The sculpture leaves Eureka in pieces in December, though Flatmo won't be assembling it for its six-month residency at the Renwick Gallery until February of 2018. Unlike the massive "El Pulpo" or the more recent pile of toothy creatures on wheels "Rabid Transit," Flatmo's first pyrotechnic kinetic sculpture "Tin Pan Dragon" will fit in the gallery space. Video of those other pieces in action will play during the exhibition but evidently you can't fire up a monstrous cephalopod that close to the White House. Go figure.

For now, Flatmo is polishing the roughly 15-foot-long dragon with a wire brush and chopping the wings and head off to fit into a custom crate that will be stacked onto an 18-wheeler with some five or six other machines.

"They cover all your expenses, but you need to pay it out," says Flatmo with a low chuckle, adding that the government paperwork alone is a daunting task. And at least he's not alone, as he notes, "I'll have my friends down here helping me put it in a crate." Other installations will be created on site at the Smithsonian by artists like Michael Garlington and Natalia Bertotti, whose structures are burned at the annual festival held in Nevada's Black Rock Desert.

Flatmo says his years participating in the Kinetic Grand Championship "really prepared me to go do this bigger stuff." He adds that he's excited the Smithsonian wants to show "this thing that was born in Humboldt County out of pie tins and scraps."