Kitchen Makes Brief Court Appearance, Being Jailed in Isolation for her Safety 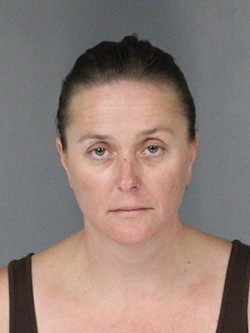 Marci Kitchen — who voluntarily surrendered her bail bond yesterday and was booked into the Humboldt County jail — appeared briefly in court this morning before returning to the jail, where she is being held in isolation for her safety.

After Kitchen left the courtroom, Judge Kaleb Cockrum indicated that she is now being held without bail until her sentencing, which is scheduled for Sept. 18. Kitchen’s attorney, Interim Conflict Counsel Meagan O’Connell, indicated to the court that her client intends to read a statement at the time of her sentencing, which would constitute the first time she has made a public comment since hitting and killing two 14-year-old girls — one of them her daughter — while driving drunk shortly after dusk July 12, 2016, on Eel River Drive.

As we reported yesterday, Kitchen voluntarily surrendered her bail bond and committed herself to the Humboldt County jail yesterday afternoon. Max Hadley, who the court recently appointed to be Kitchen’s mitigation specialist, told the Journal that Kitchen made the decision in an effort to “take responsibility.”

Kitchen pleaded guilty as charged in the case on Aug. 20, admitting to two counts of vehicular manslaughter while intoxicated, one count of driving under the influence causing an injury and one count of fleeing the scene of an injury crash, as well as seven special allegations. When sentenced on Sept. 18, prosecutors believe she faces a maximum penalty of 11 years in state prison, though she is also eligible to receive probation.

Hadley told the Journal after this morning’s hearing that Kitchen is being held in isolation at the jail because jail staff fears for her safety.

“She did not make that request and we did not make it for her,” Hadley said. “But I think there’s good reason for them to do that.”

During this morning’s hearing, Cockrum also granted a pair of requests from local media to take video footage and photographs of Kitchen’s sentencing hearing. Cockrum also reportedly said he would inquire about broadcasting the sentencing hearing in Supervisors Chambers on the courthouse’s first floor in anticipation that a larger crowd may attend the hearing than the courtroom can accommodate.