Last weekend I had the pleasure of showing off Trinidad and Trinidad Head to an old family friend who was visiting from the prairie. Prairie folks don’t often see the edge of the continent, let alone this coastal gem that we have here on the Humboldt shore. Of course, my idea for a tour around the Head was to hike around it at night with my camera.

Trinidad Head extends into the ocean between Trinidad Pier and State Beach, a large forested promontory that shapes and protects Trinidad Harbor. A bulwark against the heaviest Pacific seas and weather, it also affords fantastic views from high above the ocean along a trail that skirts the formation’s perimeter while climbing a couple hundred feet of elevation.

My brother and I brought our friend to the base of the trail at State Beach after sunset Aug. 25. We each had flashlights, but with the light of the rising moon I knew it would never be completely dark. I was already powering up the trail to reach the big vistas near the top when immediately we were given a view back across the pier and harbor: a beautiful shot with the moon fresh above the horizon, its reflection skimming across the water to meet the glows of the row of lights on the pier. Setting up to take some photographs of that scene, I felt grateful that these unplanned gems so often present themselves when I go out.


Feeling satisfied with the good fortune of that moonshot, we continued up the trail. The steepest part of it is that first stretch. It was fairly dark now, except for the moon, and in areas where the trail tunneled through the trees we used our flashlights. The views along the way were gorgeous; the moonlight silvering over the Pacific, the waves crashing on sea stacks and along State Beach below, the forested coastline stretching to the north past College Cove.

The trail’s entire circuit is something over half a mile, but our destination was about a quarter of the distance around the Head, a rocky outcrop that faced west over the ocean. We were between 200 to 300 feet above the Pacific, according to a topographic map I found online (see link at the end of this article). Looking west from that position, the view extends up the coastline to the north on the right, and down the coast to the south on the left. I wanted to make a panoramic photograph that would include it all.

It feels like the top of the world standing on that rock outcrop, with a broad view of the coast from north to south and a drop straight down the towering cliff to the rocks and ocean below. In the moonlight we could see out to the horizon. Sounds of crashing surf rose to our ears, blended with the mournful nautical moo of a foghorn and the jingle of a bell buoy. Our prairie-home companion suggested the “moo” might be the ghost of a cow, somewhere lost at sea … 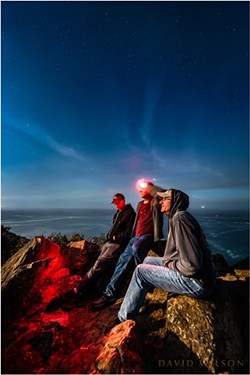 The sky held its own wonders, most of which were overcome by the brilliance of the moon. In the panorama, the Milky Way would have been visible in the area above the people, but one can barely discern its detail in the bright sky above them. Mars sits over their heads to the left and above the green light on the horizon is Jupiter. We had just seen Venus sink into the mists above the Pacific a few minutes before.

The panorama and the portrait of the three of us were illuminated entirely by the light of the full moon, except for the red glow in the portrait coming from my headlamp. The images show more color, more detail and more light than we were able to see ourselves, though we could see well enough under the moonlight with our night-acclimated eyes. I am a lay person on the subject of anatomy but as I understand it the cells in our eyes that are more sensitive to lower light are less sensitive to color; thus, we don’t see much color in the muted light of the moon. In another instance of the camera differing from the human eye, its sensor doesn’t have that problem. If you give it enough light, it will pick up colors well. In making the panorama, I gave it plenty of light with a long shutter speed of many seconds, a wide lens opening and a fairly high ISO (light sensitivity) setting. At home editing the images I was surprised at the brilliance of the colors in the foreground vegetation in the panorama; I hadn’t really noticed the colors under the moonlight.

Some additional trail information, with a topographical map, can be found here: https://www.trails.com/us/ca/trinidad/trinidad-head-trail. I can’t vouch for the accuracy of the information there, but it seems accurate.