Update: I-5 Back Open 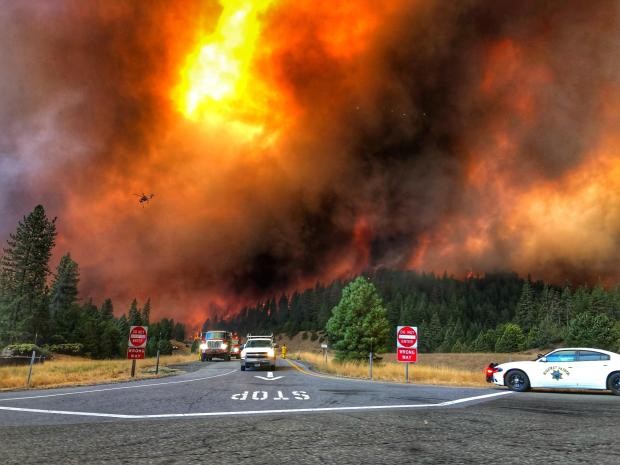 UPDATE: I-5 between Redding and Mt. Shasta is OPEN. Travel is reduced to one lane in each direction for approximately 17 miles. Motorists are asked to drive with caution, obey all traffic control operations and be patient. Lengthy delay. FLAMMABLE VEHICLES ARE NOT ALLOWED.

PREVIOUSLY:
The Delta Fire has grown to nearly 41,000 acres and continues to force the closure of a stretch of Interstate 5 this morning with another evaluation of the threat to public safety set to take place this afternoon, according to a Caltrans tweet.

Two “soft closures” have been established in areas of the blaze, now 5 percent contained, affecting the communities of Lakehead and Dunsmuir with certain conditions but the interagency fire management team notes that “visitors and tourists will not be granted access.”

UPDATE: Interstate 5 north of Redding remains CLOSED. Official will re-evaluate safety conditions this morning and a decision on reopening the freeway will be made this afternoon.


Hard Closure Information:
The Delta Fire is zero percent contained and still poses a very real threat to citizens and Interstate 5. Each day fires resurface along the interstate making it unsafe for vehicular travel which necessitates its continued closure. In the interest of public safety two hard closures have been established: 1) Northbound Interstate 5 at Riverview Drive; 2) Southbound Interstate 5 at Flume Creek Road. Only emergency vehicles, utility company staff repairing critical infrastructure, and timber land employees assisting with fire mitigation efforts will be allowed through the hard closures.
Soft Closure Information:
In order to limit the number of citizens near areas under an advisory and/or mandatory evacuation, or in close proximity to the fire, two soft closures have been established which effect the communities of Lakehead and Dunsmuir:
1) Northbound Interstate 5 at Fawndale Road; 2) Southbound Interstate 5 at Mott Road. For this fire, determination of who is allowed through the soft closures rests with the Sheriff's office having jurisdiction over the evacuated areas within their respective counties. As such, only local residents with a valid identification card listing the town/city as their residence or whom possess other documentation which conveys residency (power/utility bill, lease/rental agreement, etc.), business owners who possess a physical business establishment within the town/city, and employees of the aforementioned businesses will be allowed through the soft closures.
a) Business owners will be required to provide proof of ownership and the physical address of the
company.
b) Business owners requesting their employees be allowed through the closure must provide an emailed list of names to SCSOLOGISTICS@gmail.com.
Due to the public safety threat posed by the Delta Fire, visitors and tourists will not be granted access through the soft closures to these communities.