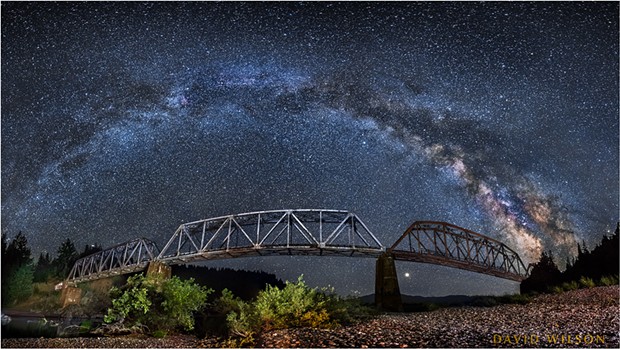 Built in 1910, this old railroad bridge crosses the Main Fork of the Eel River just upstream of the confluence with the South Fork Eel River. I’m not absolutely certain what to call the bridge, having seen it variously called “South Fork Bridge,” “Dyerville Train Trestle” and “Dyerville Bridge." It is part of the old Northwestern Pacific Railroad that used to run through Humboldt County until the end of the 1990s or early 2000s. Two of the four spans of this bridge were washed away in the 1964 flood; I imagine they were the two spans on the left, being shinier and perhaps newer.

This summer I went out on two different nights to this bridge with a photo friend of mine, the first night becoming overcast early. Illuminating the bridge was an exercise in painting light with a flashlight, adding touches of light here and there in the dark. Some light also came from street lamps along U.S. Highway 101 across the river far behind us. A combination of those lamps, the light painting, long exposures of around 30 seconds, a high ISO setting (light sensitivity) and a fairly wide aperture combined to make the scenes bright and detailed.

My hope was to make a panoramic image of the bridge with the Milky Way arcing over it. I’d scouted it out in the daylight and I saw that if I came back at night I would find the image I sought. But it’s often overcast along the river late at night, and such proved to be the case the first night. I took a few photographs, but the sky grew progressively cloudier and, though we waited patiently, we were never to get a clearer view of the Milky Way and I didn’t make the panorama. 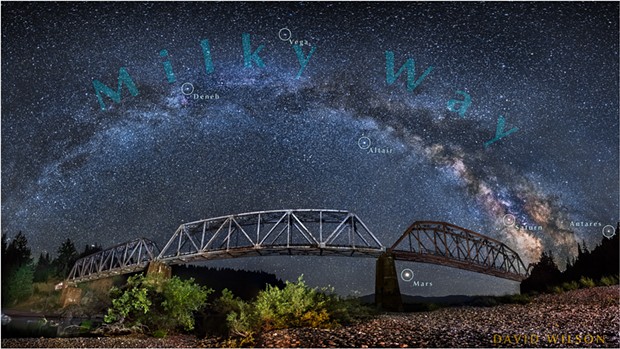 We returned a few days later and were graced with perfect, cloudless weather. Mars hung bright on the horizon beneath the bridge, nearing its closest approach to Earth since 2003, when the two planets came closer together than they had been in 60,000 years. Nearby, Saturn was visible in the heart of the Milky Way. The air was warm and everything felt perfect. We were stoked.

I made the panorama by shooting four vertical photographs of the bridge side by side, each of the images overlapping the next. Later I would match them together in the computer to show the entire, wider scene. It was a challenge to illuminate the shots consistently with only a flashlight but it’s necessary in order for the separate images to blend well with each other. 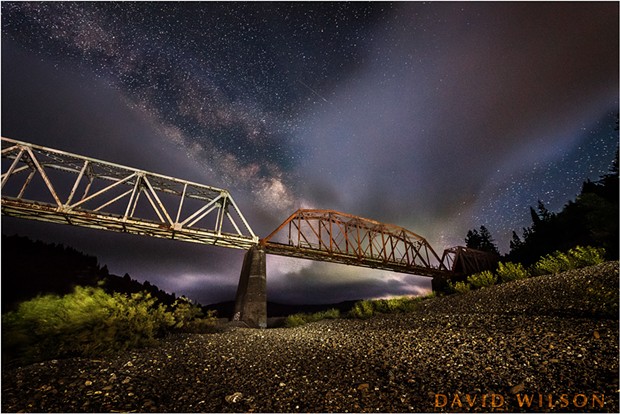 One can see this bridge from a broad overlook on the Avenue of the Giants, complete with info signs, just to the north of the Honeydew/South Fork exit off U.S. Highway 101. From that spot, look southward up the left-hand Main Fork Eel River to see the bridge. It’s also visible from the freeway in that area. The South Fork Eel River valley branches off to the right.

These are the same railroad tracks you see against the bluffs across from Rio Dell and the tracks that run along Eureka’s waterfront, where you can still find some rusty trains sitting on the rails down at Commercial Street and Waterfront Drive; they're the tracks that run along 101 between Eureka and Arcata, and the ones that continue out past Janes Road toward Blue Lake. It’s easy to forget as younger generations grow up without them that not too long ago the trains were running, and one could watch them pass daily and hear their whistles and rumblings.