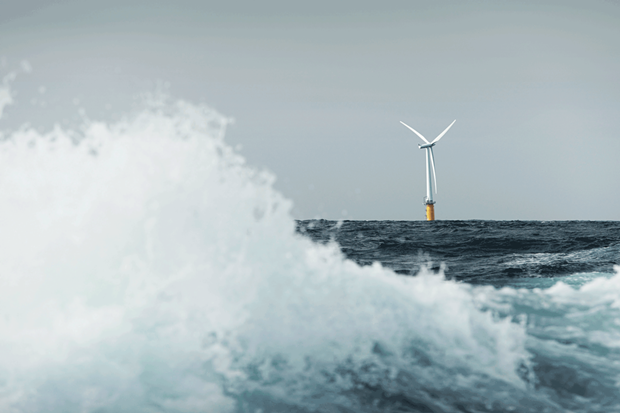 Efforts to build a wind energy farm off the North Coast took a substantial step forward this week, when the Redwood Coast Energy Authority and a consortium of private companies submitted a lease application to the federal Bureau of Ocean Energy Management.

The application seeks site control of about 70 square miles of ocean approximately 20 square miles off the coast of Eureka, with the goal of identifying a roughly 12-square-mile area that would eventually become home to up to 15 floating wind turbines anchored to the ocean floor.

While the application is a crucial step, the project’s path forward remains very unclear.

As we reported earlier this year (“In the Wind,” Feb. 22), a triad of factors have local and state officials, as well as some energy companies, increasingly excited about the potential of offshore wind energy on the North Coast.

The winds off the North Coast are strong and consistent, making them a perfect fit for wind energy. That, coupled with California’s increasingly aggressive push toward renewable energy and a U.S. Navy decision to veto any offshore wind operations south of Big Sur, has local officials increasingly excited about the possibilities. The hope is that not only will RCEA and its partners successfully develop a small-scale wind farm that would provide almost all the electricity needed in Humboldt County, but that Humboldt Bay would also become a manufacturing and maintenance hub for the wind turbines, servicing other farms in the Pacific Northwest and becoming an economic driver locally.

But there’s a long road ahead.


Matthew Marshall, RCEA’s executive director, said the agency got involved in the process with the aim of seizing some local control over what may become a hugely sought after resource. Marshall said there are essentially two tracks for leasing from the Bureau of Ocean Energy Management. Most typically, the bureau takes it upon itself to research the feasibility of an area and then puts a lease up for auction. But RCEA is taking the track of submitting an unsolicited lease request, having already identified a location. After the bureau reviews RCEA’s request, if it decides the location is worth pursuing, it would then issue a request for competitive interest, which could trigger a competitive bidding process.

“We’re excited to be taking this next step,” Marshall said. “But it’s one step forward in a multi-year process that’s going to have many stages.”

Moving forward, Marshall said he hopes the bureau will decide on the application by next spring, which would trigger the request for competitive interest and the next phase of the process. Facing a host of unknowns and questions beyond their control, Marshall said RCEA and its partners are shooting to have the wind farm operational in 2024.

See the full press release from RCEA copied below and find past Journal coverage of the issue here.

EUREKA, California, September 12, 2018 – The Redwood Coast Energy Authority (RCEA), with support from a consortium of private companies, has submitted a lease application to the Bureau of Ocean Energy Management (BOEM) to advance the development of an offshore wind energy project off the coast of Humboldt County, in Northern California. The 100-150 megawatt (MW) floating offshore wind farm is planned to be located more than 20 miles off the coast of Eureka.
RCEA and the consortium, which includes Principle Power Inc., EDPR Offshore North America LLC, and Aker Solutions Inc., have been working with members of the community since 2017 to explore and develop the offshore wind potential of Humboldt County. RCEA initiated a competitive process earlier this year and selected the consortium to enter into a public-private partnership to pursue the development of the proposed project. Since its founding in 2003, RCEA, a local government joint powers agency, has provided an array of energy services to Humboldt County residents and businesses.

In recent months, RCEA has done an increasing amount of community outreach – informing the public and commercial interests, gathering feedback, and listening to and incorporating the concerns and desires of the region – to form the basis for the lease application submitted to BOEM. The project is expected to bring significant economic benefits to the region in the form of jobs and increased spending in the local community and State of California. A longer-term goal of the project is for Humboldt Bay to become a central hub of a US west coast offshore wind industry.

The State of California set ambitious goals this week by signing Senate Bill 100, reaching for carbon neutrality and 100% clean electricity by 2045. We are at the very beginning of a multi-year process, but so far, the response from the public has been positive. Humboldt County has a long history of innovative leadership when it comes to renewable energy solutions.”

RCEA’s work with the Humboldt community, state and federal agencies, and others has generated an overall positive response to the proposed project and sets the framework for successfully delivering clean energy to local ratepayers at a competitive cost, under an efficient, locally driven and guided development philosophy. RCEA and the consortium will continue to focus on community and stakeholder outreach during this multi-year process to understand and address potential concerns.

Donna Wright, Executive Director of the Greater Eureka Chamber of Commerce, said “the Chamber supports economic development opportunities with offshore wind and clean energy and supports efforts to keep Humboldt County and California competitive in this growing industry. Business plays a key role in community leadership and by working with RCEA and their consortium we want the community to know that we are committed to supporting policies and advocating for programs that promote economic, environmental and community sustainability.”

RCEA and its project partners engaged in a systematic, comprehensive process to determine a location for the Humboldt offshore site that minimizes impacts to the environment and communities, including commercial fishing, that are active offshore. Based on this interactive process, the proposed lease area will support selecting a final project site for an expected 10-15 turbines that avoids or minimizes impacts on marine navigation corridors, major commercial fishing areas, and environmental resources.

RCEA‘s project partners bring the expertise needed to develop, finance, and operate projects as well as build an offshore wind energy supply chain. The complementary capabilities of Principle Power, EDPR, and Aker Solutions bring the long-term commitment needed for a successful project. RCEA and its consortium of development partners are working to bring the project online in 2024, which will help unlock the extraordinary value of offshore wind energy for California.

“We wanted a project of this magnitude to move forward with the local community having a strong role throughout the process,” added Matthew Marshall, Executive Director at RCEA. “We are extremely excited that we've been able to partner with such a highly-capable and experienced team of companies that are committed to that vision of a community-led project.”

About the Redwood Coast Energy Authority
The Redwood Coast Energy Authority is a local government Joint Powers Agency whose members include the County of Humboldt; the Cities of Arcata, Blue Lake, Eureka, Ferndale, Fortuna, Rio Dell, and Trinidad; and the Humboldt Bay Municipal Water District. The purpose of the Energy Authority is to develop and implement sustainable energy initiatives that reduce energy demand, increase energy efficiency, and advance the use of clean, efficient and renewable resources available in the region for the benefit of the Member agencies and their constituents.