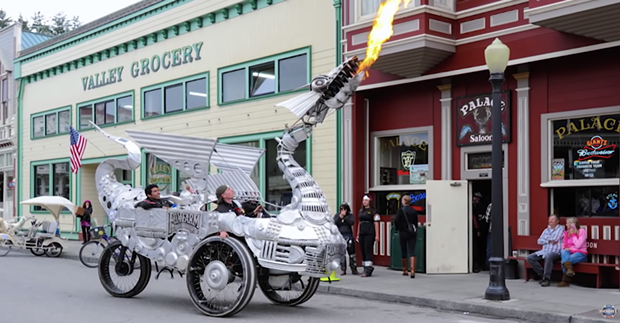 So it turns out former Arkansas governor, radio host, minister and conservative political commentator Mike Huckabee has a show. It airs on the Trinity Broadcasting Network, where you can also tune in for Jesus the Game Changer. Huckabee features a segment called "Our Kind of Town," in which the folksy politico, who resigned from the Country Music Awards board after industry outcry over his anti-LBGTQ rhetoric, highlights a place that speaks to him. On Sept. 22 he featured our own beloved Ferndale, extolling the wholesome virtues of the Victorian Village over a nicely edited video featuring shots of holiday lights, local architecture and the finish line of the Kinetic Grand Championship, for which he tips his hat to Visit Ferndale and the Gingerbread Mansion. See the clip below.


Huckabee winds up the video stating, "I've decided Ferndale might be one of the towns in California where I wouldn't be asked to leave before daylight." Maybe so. Though it's less likely he or his daughter White House Press Secretary Sarah Huckabee Sanders are up to tussling with The Ferndale Enterprise.

He lauds the town having "fostered culture and charming quirkiness while still being an enchanting and friendly place to visit." We couldn't agree more. In fact, local photographer León Villagómez shot one of our favorite Wedding Guide covers there.