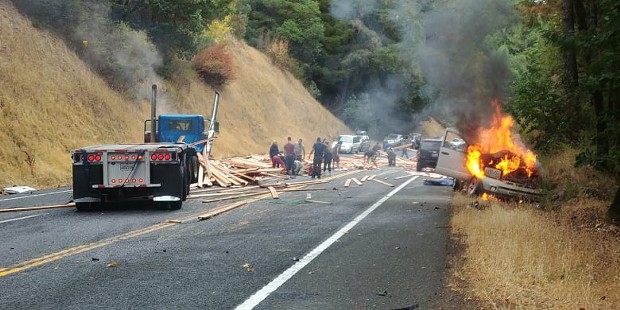 A major accident involving a car and a semi has closed U.S. Highway 101 north of Willits near Outlet Creek, according to a witness at the scene.

The crash caused the vehicle to catch fire with at least one person inside and the semi spilled an entire load of lumber across the roadway.

Southern Humboldt resident Chris Brannan told Kym Kemp of Redheaded Blackbelt that he was one of the first on the scene, saying, “We all ran down with fire extinguishers and started pulling the wood off of the road to get the emergency vehicles a lane … while others pulled the bodies out and started CPR.”


Just before 3 p.m., Brannan reported that the fire was out and emergency vehicles were on scene. He said an officer speculated that the highway would be closed for a while.

The CHP Incident Page indicated both lanes were closed.