It is strange how something so interesting can hide itself for decades, virtually in plain sight. I’d been to this beach many times in daylight over the years, thrown many a frisbee beside the giant, brush-covered rock into which this cave penetrates, yet somehow I had never walked around to the far side and seen the mouth. I had never even heard about it … unless I had, and I simply wasn’t ready to hear. I’m not really sure anymore. I’ve been to it twice at night in the last month now. On Sept. 28, 2018, I made it back to the cave for my second nighttime visit.


It’s a pretty large beach cave; all the more amazing that I hadn’t seen it until a year ago. A school bus could fit in there, though you might have to bend it a little (of course you shouldn’t try this at home). Near the entrance the walls are covered in growing things, with a few crabs and other critters taking cover from our lights. We tried not to blast them much. Farther back, the walls and ceiling are smooth, glossy with moisture. A large cleft down the center of the cave’s roof extents from the mouth all the way to the back, and is visible on the outside above the cave’s entrance as well. Is this a single rock splitting in two? 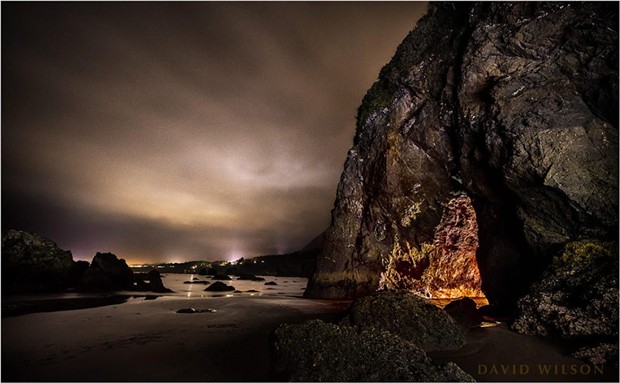 I suppose a lot more folks will know about this cave now. That bothers me a little, for the knowledge can generate more traffic. But I think that those who can appreciate the world’s beauty the most will be the most careful of it. And I console myself with the thought that this cave is only accessible at very low tides, while at medium and high tides it’s completely awash, so it will always be possible to make the first tracks if one’s timing is good. I was hoping for such a pristine floor this time, but when we arrived after dusk my brother’s flashlight found a few faint footprints already in the cave’s sandy mouth. Oh well, people are part of the planet, too, right?

Local color: After sharing these images on my Instagram account, a viewer commented that she’d been there earlier that very night with her grandson and stood in the cave’s entrance for the sunset. The footprints we’d seen were hers and her grandson’s! One of the wonders of online sharing these days is that it is sharing; stories go both ways, and I enjoy it either way.