I was enwombed in a place of dreamlike comfort and warmth. In the honey hum of perfect slumber, I was suspended in the vibrations of the universe. Dreaming of misty sunbeams and forest floors, and floating like a butterfly. Except …

Except the sound of Dr. McCoy’s medical scanner was intruding. It peeled away the warmth and glow, pulled back the mists and shattered the hum. My world tottered, and then it was dark. I was in bed. My alarm was going off. And I was tired. I reached for the phone and shut off the alarm.

3:30 a.m. read my phone and it was time to get up and go take the first Milky Way photograph of the year. Except it was so very early, and I was so very tired. And dreamland’s paradise of moments before still beckoned.

But a voice said to me from inside, "If you don't go out, you won't bring anything back.”

“But sometimes a body needs to sleep!” I cried.

“Well, if you don’t go out, you won’t bring anything back.” 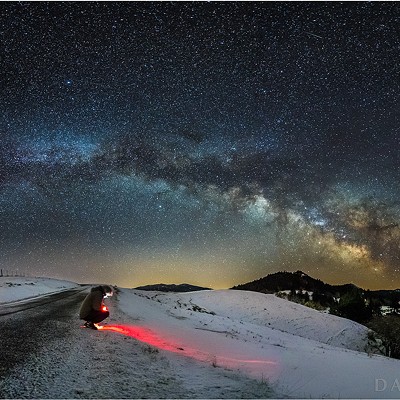 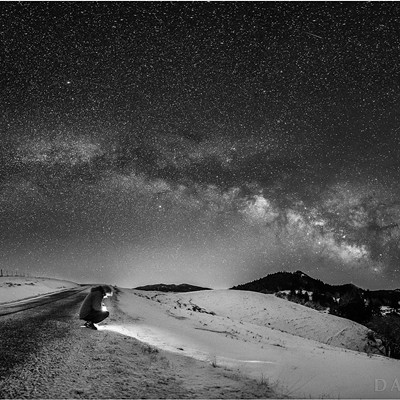 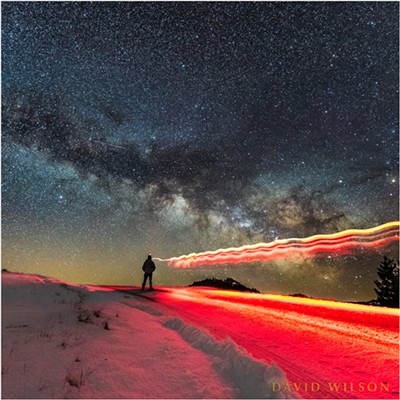 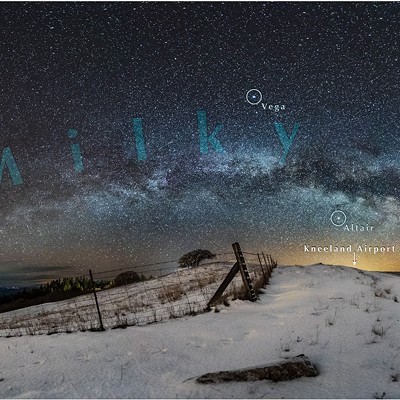 Milky Way on Kneeland Snow
By David Wilson
Click to View 5 slides
It had snowed the previous couple of nights in the hills around Kneeland east of Humboldt Bay. The chance to catch the Milky Way over a snowy Humboldt panorama was too much to resist. At that time of year the Galactic Core of the Milky Way is only visible before dawn, and I knew that its best visibility would be after 4 the next morning. I had in mind a place where I could catch it arcing over the snowy hillside and country road near the Kneeland Airport.

I had been to that spot in December to take some nighttime photographs with my son, and from that visit I saw that later in the year it would be the perfect place to see the Milky Way before dawn began brightening the east. The Milky Way would be rising at a low angle close above the horizon in those wee hours, and my memory of the spot put it right above the road where it makes that turn you see in the panorama. My weather site said there would be a little new snow during the night to add to that which remained from the previous days, but that by 4 a.m. sky cover would be less than 40 percent. 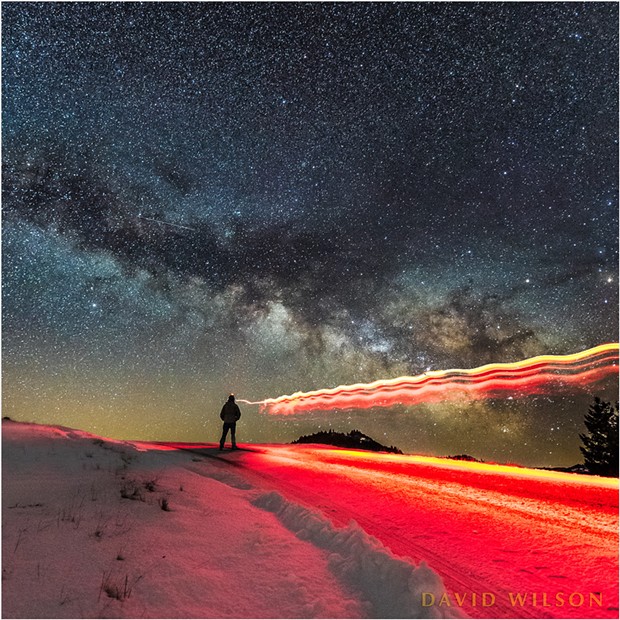 When I arrived I was presented with another of the beautiful photographic opportunities so often given me, for which I am eternally grateful. The sky was virtually cloudless, and the Milky Way rose in the southeast, a luminous band stretching low across the sky to the northern horizon. My first Milky Way sighting of the year was right where I thought it would be. A thin dusting of the night’s new snow lay on the road.

In the scenic panorama, the view extends from the southeast on the right side to the northwest on the left side, about a 180 degree field of view. Beneath the Milky Way, the orange glow up the road and over the hill radiates from the Kneeland Airport. As your eye continues to the left it passes Blue Lake’s blue glow to the north, and then farther left is the warm luminance from McKinleyville and Arcata. Eureka was just out of view to the left.

After making the panorama, I couldn’t resist taking another couple of photos that included me in them just for fun: self-portraits. Why do photographers do that? I don’t know, but it gave me a chance to play with my headlamp and do some light painting in a few photographs. It was fun. But would you guess that it can also be lonely? It isn’t always, but it can be dreadfully so. Fortunately I have family and friends who will come out with me. I am grateful for them. (Thank you, guys!) Naturally, though, I want to go out a lot more than they do as a group, and I will either find myself out there alone or sitting inside, aching to be out there.