The U.S. Interior Department announced this morning that it is officially beginning the process of looking for companies interested in developing offshore wind farms along the California coast.

The department will issue a "call for information and nominations" tomorrow, which will kick off a 100-day comment period that will close Jan. 27.

So what does this mean for Humboldt County? A few things.


First and foremost, it means that the unsolicited lease request submitted by a consortium of companies and the Redwood Coast Energy Authority is now being added to a larger process. RCEA Executive Director Matthew Marshall said this has always been a possibility and likely won't have much of an impact on RCEA's proposal to put between 10 and 15 turbines about 20 miles off the coast from Humboldt Bay. The project is projected to produce enough energy to power most of Humboldt County's electric grid.

But Marshall said there are some aspects of today's news that are of note. 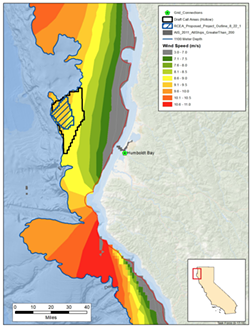 The Bureau of Ocean Energy Management is not limiting its call for information to the stretch of ocean off the North Coast. The U.S. Navy had initially objected to any wind farms being placed off the California coast south of Big Sur, saying they might interfere with military testing operations. That turned all wind energy companies' eyes to the North Coast. But today's news notes that BOEM is also assessing interest in some areas of the Central Coast, which Marshall said is an indication that the Navy has likely agreed to bend a bit.

And Marshall said that could be good news for a couple of reasons. It could mean less competition for leases off Humboldt's coast, giving RCEA's proposal — which comes with some form of local input and control — a better chance at success. It also might ultimately result in more wind farms off the entirety of California's coast, which could put Humboldt Bay in position to become a servicing hub for wind turbines and equipment, as it's one of the only harbors on the Pacific Coast that ships can access without passing under a bridge, which isn't feasible for barges toting 750-plus-foot-tall wind turbines in need of repair.

For more on what RCEA is proposing, check out prior Journal coverage here or the nonprofit's unsolicited lease application here. (Also check out a guest opinion piece in this week's issue by a local fisherman concerned about potential impacts to the commercial fishing industry here.) And for more on the BOEM process announced today, click here and read the Interior Department press release copied below.

WASHINGTON – Yesterday, U.S. Secretary of the Interior Ryan Zinke announced three major developments in American offshore wind energy spanning from coast to coast. Continuing with the Trump Administration's all-of-the-above energy policy, the Secretary spoke at the American Wind Energy Association’s Offshore Wind Conference and announced 1.) much-anticipated wind auction in federal waters off the coast of Massachusetts; 2.) the environmental review of a proposed wind project offshore Rhode Island; and 3.) the next steps to a first-ever wind auction in federal waters off of California.

“I'm very bullish on offshore wind, and harnessing this renewable resource is a big part of the Trump Administration's made in America energy strategy,” said Secretary Zinke. “We are always looking at new ways to increase American innovation and productivity to provide abundant and affordable energy for our homes and manufacturers. I think this is a win for America. Working together with states, fishermen and the energy industry, we are making offshore wind a reality, and these three historic announcements are proof.”

The Bureau of Ocean Energy Management (BOEM) will hold the next offshore wind auction – to include nearly 390,000 acres offshore Massachusetts – on Dec. 13, 2018. Nineteen companies have qualified to participate in the auction for the Massachusetts Wind Energy Area, demonstrating continued strong commercial interest in the U.S. offshore wind market.

“The Massachusetts sale has a lot of potential for both energy and economic activity,” Zinke said. “If fully developed, the wind auction could support approximately 4.1 gigawatts of power to supply nearly 1.5 million homes. This is just one example of the importance of fostering wind energy as a new American industry.”

For more information, including a map of the Massachusetts lease areas and information provided in the Final Sale Notice, which will be published in the Federal Register on Oct. 19, visit the BOEM website at https://www.boem.gov/Commercial-Wind-Leasing/Massachusetts/Lease-Sale-4A/.

BOEM will publish a Notice of Intent to prepare an Environmental Impact Statement for the Construction and Operations Plan for the South Fork Wind Project offshore Rhode Island. If approved, the plan would allow construction and operation of up to 15 turbines that connect via a transmission cable to a grid in East Hampton, New York - the east end of Long Island. The project is approximately 19 miles southeast of Block Island. The notice will be published in the Federal Register on Oct. 19 and will have a 30-day public comment period closing on Nov. 19.

For more information, including how to comment and locations of upcoming public meetings please visit: https://www.boem.gov/South-Fork/.

In what could result in the first West Coast offshore wind auction, BOEM will publish a Call for Information and Nominations (Call) to identify companies interested in commercial wind energy leases within three proposed areas off central and northern California. This is the first step towards offering a location for wind leasing.

The three Call Areas include 85 whole Outer Continental Shelf blocks and 573 partial blocks and together comprise approximately 1,073 square miles (687,823 acres). The Call will be published in the Federal Register on Oct. 19 and will have a 100-day public comment period closing on Jan. 27, 2019. For more information on the Call, including a map of the Call Areas and how to comment, please visit: https://www.boem.gov/California/.