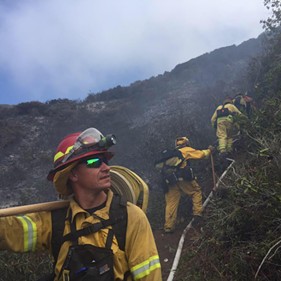 Visiting Judge Graham Cribbs sentenced Jon David Goldberg to 15 years to life in prison this afternoon for the murder of volunteer Fortuna firefighter Tim Smith but struck down a firearm enhancement that would have added 25 years to his term.

He handed down his decision after denying Goldberg’s petition for a new trial following a week of essentially conducting “a trial within a trial,” in which 11 of the 12 jurors were questioned about their conduct in the case to probe defense allegations of misconduct by panel members.

The judge also gave a 15-minute soliloquy about overseeing the trial, including how much he enjoyed his time in Humboldt, saying, “it’s mind-boggling to think things like this can happen over something ... I would say was foolish” and several versions of the sentiment that “we are all human beings, we all have failings.”

Goldberg was found guilty in March of fatally shooting Smith outside of his Rohnerville Road home Sept. 26, 2016, shortly after finding out that the 42-year-old father of two had an affair with his wife, a situation Cribbs made veiled references to in his courtroom address.

Several members of Smith’s family, including his sister and widow, addressed the court, giving emotional statements about how their lives and those of their children have been irrevocably altered by Goldberg’s actions that day.

“Fuck you, Jon Goldberg, excuse my language,” his sister Gigi said through sobs, describing Smith as a father figure in her life. “He never deserved. He never deserved this. He’ll never be with us again. … That’s my family. That’s my nephews’ daddy. You fucking took him away. ... I’m angry and I am hurt and devastated but remember, you never, never should have had in your mind to take someone’s life.”

His widow, Jessica Springer, also spoke, saying the couple had been together since she was 13 and he was 14. She described how he was an adrenaline junkie who loved doing extreme sports and she was somewhat relieved when he decided to transfer some of those energies into firefighting.

She urged Cribbs to give Goldberg the harshest sentence possible, saying she was not out for revenge but justice, and it was unfair that he could still see his children while her sons were left without a father just as they were entering manhood.

“I pray that he is held accountable for his actions,” Springer said. “I just want him to know how horribly he hurt my children.”

Goldberg, who at times turned toward the speakers during the hearing, had been facing 40 years to life before Cribbs struck down the use of a firearm enhancement.

Deputy District Attorney Luke Bernthal argued against the lesser sentence, saying “the case has always smacked me as almost an execution.”

“The truth is we would not be in the position we are today if Mr. Goldberg had not made the decision to take a loaded gun to Mr. Smith’s house and shoot him five times,” he told the judge.

Goldberg’s attorney Casey Russo gave his condolences to Smith’s family, turning to face them in the courtroom gallery and saying the “weight of your words is not lost on anyone.”

He said all indications are that his client was “not in his right mind” the day he drove to Smith’s home and that Goldberg, in fact, had a history of “trying to defuse conflicts.”

“That is a trip everyone wishes Mr. Goldberg had not taken,” Russo said.