North Coast Night Lights: This Way to the Galactic Core 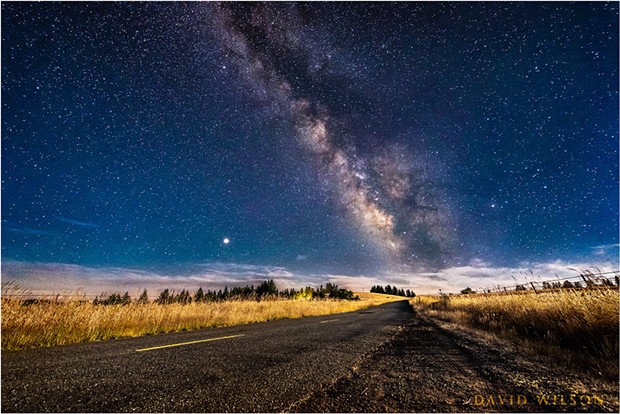 I found myself on a ridge line along the Kneeland Road the night of July 18, 2018, on an impulsive late-night mission to the Galactic Core. It was out there, all I needed was a stretch of road that would take me up to meet it at the horizon.

We live in the Milky Way galaxy, which is a spiral galaxy shaped much like a flattened pinwheel, with arms spiraling outward from its center. From Earth’s position on one of the galactic arms, we seasonally get a view through the thickest portion of the Milky Way, which appears as the milky trail, or way, of lightness that stretches from horizon to horizon some parts of the year. This band itself is often called the Milky Way. It is brighter than the rest of the night sky because when we look at it, we are looking through our pinwheel-shaped galaxy edge-on, right through the greatest number of stars, nebulae, etc. They appear so dense from this angle, and many are so far away, that they blend together into indistinct milkiness. The Galactic Core is the center of all that, the densest part, and in July it’s low on the southern horizon after dark. Looking to either side of the Milky Way band is to look above and below the edge-on view of our flattened spiral galaxy, out where the stars are fewer and less closely packed. If your mind is boggled, don’t worry, it’s probably a good thing. That keeps it from being blown. You’re extremely tiny in all this, helplessly adrift in outer space.

The Kneeland Road travels the hills to the east of Eureka out past Freshwater. It offers a tour through some of the beautiful “golden rolling hills of California” that Kate Wolf sang about. I wanted to find a place where the road and Milky Way would meet, for I thought the lines would form a compelling angle. I found what I was looking for along a ridge top where the road met the far horizon right at the Milky Way. A waxing crescent moon sinking in the west bathed the landscape with a faint, yet crisp light angling in from the side, making textures stand out. The landscape in this image is solely illuminated by moonlight and starlight.

If you’ve ever spent time outside on a moonlit night, you know that after a while your eyes become accustomed to dimness and you begin to see things fairly well, though with less detail and with less color than in daylight. As your eyes get used to the darkness, you can see more and more stars, and the Milky Way becomes more easily distinguished. Even after we’ve gotten used to the darkness, though, to our naked eyes there is not really much light at night.

To the camera such a dark scene can appear very different. In these low-light situations, a camera is capable of gathering a lot more light and color than our eyes can. In order to capture enough light in this scene to look as bright as we see it in this image, I had to set the light sensitivity very high (called ISO, same as with film), open the lens aperture pretty wide and leave the shutter open for almost half a minute. The same landscape that appeared dimly lit by the crescent moon to my eyes, which can only gather light moment-by-moment, became much brighter to the camera, which can both stay open gathering light over an extended period as well as increase its sensitivity to light with a higher ISO setting. 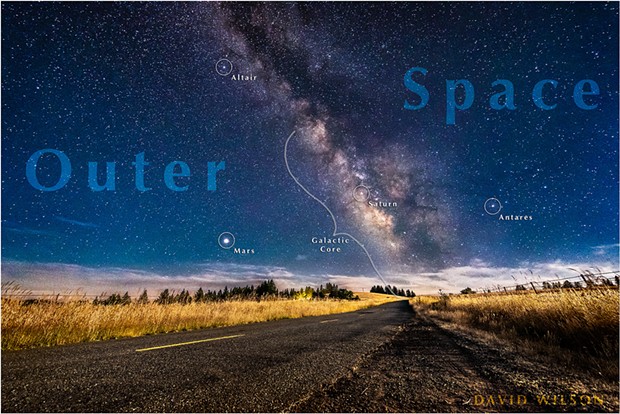 I shared this image with a College of the Redwoods colleague in Astronomy and he told me the fun fact that on July 27 Mars was at its closest approach to Earth since 2003, when it was closer than it had been in 60,000 years. I find that amazing. In this image Mars is the brightest star, out to the left of the Milky Way just above the horizon. I’m not an astronomer myself but I find the subject fascinating.